Jeff Who Lives at Home 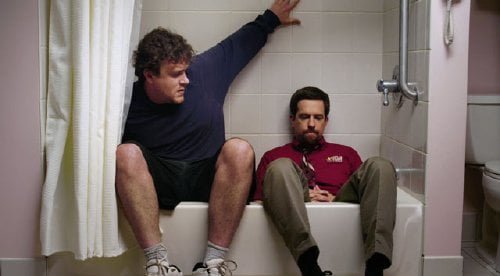 Sharon (Susan Sarandon, "Thelma and Louise") has long given up on her eldest son's ability to do anything but the simplest chores, but when she sends him out to buy wood glue for a household repair, the errand becomes an epic adventure for "Jeff Who Lives at Home."

Family dynamics explored via a combo road trip/errand was the subject of writer/director brothers Jay and Mark Duplass's first film, "The Puffy Chair," and a man-child living with his mom was the scenario for their most recent, "Cyrus." With their big studio debut they offer a lightweight retread of prior themes. A good cast and some comic moments make "Jeff, Who Lives at Home" an intermittently engaging sit, but even at an economical 84 minutes, it takes too long to get to places that are all too obvious to see from a distance. The film begins with a quote about interconnectedness attributed to Jeff, then segues to the man himself (Jason Segel, TV's 'How I Met Your Mother,' "The Muppets") explaining why he places so much importance on the movie "Signs." When he gets a wrong number call from what sounds like an angry Black man demanding to know where Kevin is, followed by an infomercial which seems to give it further weight, Jeff decides to follow any leads pointing towards Kevin. On the bus heading towards Home Depot, a young man wearing a basketball jersey with Kevin emblazoned across the back gets on. When he gets off, Jeff follows. Meanwhile, his older brother Pat (Ed Helms, TV's 'The Office,' "The Hangover") starts out his day trying to bribe his wife Linda (Judy Greer, "The Descendants") with a special breakfast. Seems the 'responsible' one has gone out and bought himself a Porsche against her wishes and their finances, which she had been shoring up for a house down payment. Back in her cubicle, mom calls Pat to become her Jeff enforcer just as she starts getting messages from a secret admirer. All of them will end up crossing paths, sometimes more than once, as Jeff follows his inner compass. And so the Duplass brothers set up their protagonist as some kind of holy fool surrounded by a family who can't see the forest for the trees. Their climax paints Jeff a hero, but nothing in his makeup really accounts for heroism - he's just a gullible, well-meaning stoner with no ambition. Pat spends his day trying to catch his wife in an affair and hemorrhaging more money in the process (that Porsche ends up around a tree well before noon). Sharon's officemate Carol (Rae Dawn Chong, "Commando," "Cyrus") tries to dispel her anxieties that she's being made the butt of a joke and encourages her to be open to the romantic possibilities but anyone should be able to figure out what's really going on here too. Segel wraps his familiar persona in a haze of pot smoke and introspection. Helms recycles his "Hangover" panic. Greer, playing another put upon wife, again finds emotional truth but ends up with the short end of the stick. Sarandon and Chong deserve a spinoff (and why are the Duplass brothers the only ones giving the latter work?). The digitally shot film shows up every imperfection on every actor's face, from Segel's moles to a small bump I've never noticed on Helms's nose to the red veins in Sarandon's eyes. There are some gentle pleasures to be found in this inoffensive little movie, but perhaps the Duplass brothers could use a jolt of Indie filmmaking obstacles to inspire some new ideas.