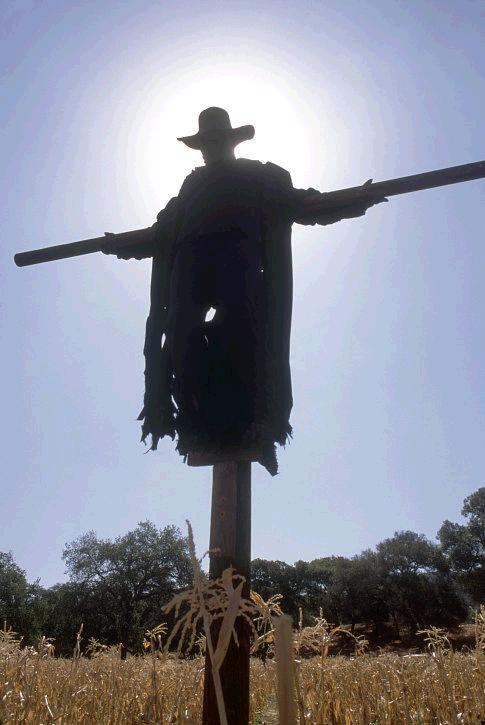 Every 23rd spring for 23 days, it gets to eat. Those 23 days aren't over and the Creeper (Jonathan Breck, "Jeepers Creepers") has a school busload of champion basketball players in his sights for some regenerative snacks in "Jeepers Creepers 2."

Writer/director Victor Salva ("Jeepers Creepers," "Powder") had some effective creep going on in his first film until the mystery was lost and control unraveled. The sequel, while it may be the first flick ever to borrow from "Jaws," "The Texas Chainsaw Massacre" and "Monty Python and the Holy Grail," is a standard monster flick which never gets its audience invested in the fates of its teen targets. Towheaded Billy Taggart is whisked out of a cornfield by what he thought was a scarecrow he'd just erected (shot by cinematographer Don E. FauntLeRoy ("Jeepers Creepers") just like the graveyard corpse from "Chainsaw") in front of the uncomprehending eyes of his father Jack (Ray Wise, best known as Laura Palmer's father on "Twin Peaks") and older brother (Luke Edwards, "American Pie 2"). Jack Jr. finds a dagger carved with the Creeper's evil history and Jack Sr. begins to plot a single-minded revenge. On a remote country road, a winning high school basketball team and their cheerleading squad is headed for home when a tire gives out. The driver (Diane Delano, "A Mighty Wind") nervously shows coaches Charlie (Thom Gossom Jr., "Fight Club") and Dwayne (Tom Tarantini, "Jeepers Creepers") the throwing star made of soldered claws and embedded with a tooth that has shredded their tire. Weird news reports of a church set ablaze yielding mutilated corpses comes in over the radio, but they cannot make contact with anyone and continue to limp along. A cheerleader, Minxie (Nicki Lynn Aycox, "Crime and Punishment in Suburbia") has a hyper real dream where Billy and "Jeepers Creepers'" Jonathan (Justin Long) try to warn her that 'he's in the field.' A second blowout reveals a second throwing star, this one embellished with Jonathan's belly button. As night begins to fall, Charlie and the driver begin to lay flares to draw attention, but each is swept off by a creature with a huge wingspan. A battle against an unrelenting evil is upon them. Salva tries to plump up his story by turning a post game racial conflict among the players into a Cold War style survival tale after the Creeper 'marks' his future victims, but it is all so much hokem. The bus proves no bomb shelter and its tin-canned teens are so much fodder. Once Jacks Senior and Junior arrive on the scene to begin a combined fight, logic goes out the window, with numerous kids simply disappearing from the action with no explanation. The film is most effective before the Creeper is really seen, perhaps because its first three victims - Billy, Coach Charlie and the bus driver - are its only sympathetic ones. The Creeper itself is just an oily face with nasty teeth, a "Predator"-like underjaw and rubbery wings. Taggart attacks it with a homemade harpoon until it is eventually in a similar condition to "The Holy Grail's" Black Knight and, like that Sir, he keeps coming anyway, although I'm unsure if the laughs here are intentional. Special effects aren't, although FauntLeRoy achieves some beautiful photographic effects from Minxie's dreams and the initial golden orange prologue. "Jeepers Creepers 2" ends with a set up for a third, but please, we're supposed to have another 23 years first.

'Every 23rd spring, for 23 days, it gets to eat.' Yes, the Creeper is back to terrorize Middle America's teenaged population once again and this time his main target is a busload of high school jocks and cheerleaders on the way home from their big victory. But, these kids are about to face an even greater challenge - survival - in "Jeepers Creepers 2." Writer/director Victor Salva invented a sometimes scary, often creepy horror film in 2001 with "Jeepers Creepers." The film ended in an unsatisfying way, but the originality of the story and its imaginatively conceived monster kept it a cut above the usual monster movie. Unfortunately, "Jeepers Creepers 2" is one of those usual monster movies. "JC2" tries to give itself horror flick legitimacy with references to the classic "Texas Chainsaw Massacre," "Jaws" and "Aliens," but reference alone does not put a movie into the classics league. What we have is a typical slice and dice horror flick where the Creeper rends metal, rips off heads and generally commits mayhem on the helpless teens - after dispatching the adults in short order. Since it is the last night of the 23rd day and yada-yada the Creeper must indulge in its final feeding frenzy before it goes into hiding for the next 2+ decades. It preys on the students' fears and, one by one, takes them out in a variety of ways, mostly by ripping off body parts for its regeneration. But, just so you don't think that this is just another teen decimation flick (even though it is), there is an Avenger on the horizon. As "JC2" gets under way, we are in the sun-drenched cornfield on a farm by the infamous East 9 highway. A handsome young boy is in the field tying scarecrows to posts when he notices that one of the dummies doesn't look quite right. Suddenly, the scarecrow attacks and drags the boy away. His father, Jack Taggart (Ray Wise), and brother Jack Jr. (Luke Edwards), take chase but are helpless when the Creeper flies off, clutching the screaming boy. Despondent and angry, the two Jacks take their welding torches and farm equipment build a humungous harpoon gun to fight back. Back to the school bus and the kids are frantically trying to get help on the radio without luck - until Jack gets on the horn. But, the Creeper is taking its toll and the number of teens begins to dwindle. Can they survive long enough for help to arrive? And, if help does come, will it be enough to stop the unstoppable Creeper? You guess. Helmer/scribe Salva goes the routine path with his follow up to his original "Jeepers Creepers" and comes up with a generic, cookie cutter horror flick. The Creeper, in the first flick, sent a chill up my spine as it posed as a supernatural wolf in earthly sheep's clothing. Sure, the film degenerated into a regular, old horror movie ending with the obligatory set up for the sequel, but getting there was creepy fun. The sequel is nothing more than a mayhem fest, with death dealt out in a variety of ways, until its big "Aliens"-like finale. Techs are what you would expect. The acting is on the teen angst level with a dose of racial tension introduced, for some odd reason. Ray Wise, the 'name' actor, gets to chew scenery as he goes toe-to-toe with the Creeper, but the kids are directly from a casting call for good looking teens willing the be Spam in a can. "Jeepers Creepers 2" has enough shocks to satisfy the less discerning filmgoer, which is exactly the market the filmmakers will target. It will be a holiday weekend hit at the multiplexes and will likely do well enough at the box office and beyond, which is a pity because it means we may have to suffer "JC3" next year. If you're expecting "JC2" to be an extension of the first, you will be disappointed. It fits its niche, though, and