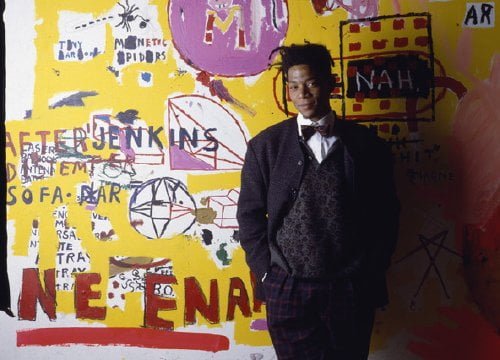 Jean-Michel Basquiat hit the New York art scene in the late ‘70s selling his hand painted post cards and creating “traffiti,” painting the sides of NY buildings with elaborate paintings and signing them “Samo.” Filmmaker and close friend Tamra Davis dusted off her personal archival film footage, unseen for 30+ years, of the iconoclastic artist, his art, his glorious rise to fame and terrible fall, ending a brilliant career at age 27, in “Jean-Michel Basquiat: A Radiant Child.”

In the late 1970's, crime was rampant in New York City, but the music and art scenes were vibrant and artists could actually afford to live in Manhattan. In 1978, the 17 year-old son of an well to do accountant moved downtown from Brooklyn and started to make a name for himself as the graffiti artist Samo. Within two years he had taken the art world by storm as "Jean-Michel Basquiat: The Radiant Child." Director Tamra Davis ("Billy Madison," "Half Baked") was a friend of the artist, but while she paints him in an uncommonly flattering light, she also charts the evolution of the charismatic young man as artist in such a compelling way it plays like an art appreciation class. I've seen senior artist Julian Schnabel's biopic "Basquiat," but never knew he had a band called Gray (actor/director Vincent Gallo was a fellow bandmate). 'Gray's Anatomy,' a reference book gifted to Basquiat as a child, is one of his more surprising influences, and once Davis notes examples one starts to see them everywhere. Picasso is another one. His most famous, then superstar Andy Warhol, was perhaps his most famous and his most lethal. Davis includes many excepts from her extensive interview with the artist at the L'Ermitage Hotel in 1986, but she also has far rarer footage of Jean-Michel painting during his L.A. 'getaway,' when, it's alleged, he began his heroine use. (By the time his drug addiction is mentioned, one has begun to wonder if it would ever come up.) Basquiat the charmer (that smile!) makes it easy to understand his status as a legendary womanizer, but Davis takes little time to expound on the havoc he wrecked upon the lives of many. It's a fairly straightforward rise and fall story with lots of interesting anecdotal tidbits thrown in (Debbie Harry bought a painting for $200, his first customer; Madonna was an early lover...). Once again we see how rapid success at a young age is too heady an experience for most. The film is the usual collage of archival footage and interviews, talking head commentary (John O'Brien of NYC cable access show 'TV Party,' art gallery owners Annina Nosei and Bischofberger, Schnabel, etc.) and those wonderful split screen art comparisons. The soundtrack features much of the revolutionary music being made at the time. "Jean-Michel Basquiat: The Radiant Child" may not be a well-rounded portrait of the man, but it's a powerful look at the artist.

Juilian Schnabel’s 1996 film “Basquiat” first introduced me to the work of Jean-Michel (and, also, introduced the world to Jeffrey Wright, who played the meteoric artist). Tyro documentary filmmaker Tamra Davis opens up her extensive film archive that focuses on Basquiat, his ascendance to the Manhattan art community and his deadly crash due to drugs. Davis, it is obvious, had strong feelings for her talented friend and her film is a heartfelt homage to Jean-Michel Basquiat. “Jean-Michel Basquiat: A Radiant Child” is a straightforward documentary that brings the man and his art to the screen in a linear construction. Davis focuses the influence that the great masters had on his work, though he did not imitate the maestros of the brush stroke. Instead, he reinvented their works, passing the ideas and images “through a new mind.” When you see J-M’s works next to Da Vinci, Picasso and Grey’s Anatomy, you can see their influence, but their ideas take on new tone, texture and style under Basquiat’s brush. At a time when Andy Warhol’s minimalistic works influence the NYC art world, Jean Michel produced elaborate, maximalist paintings. He was a talent lost too soon.