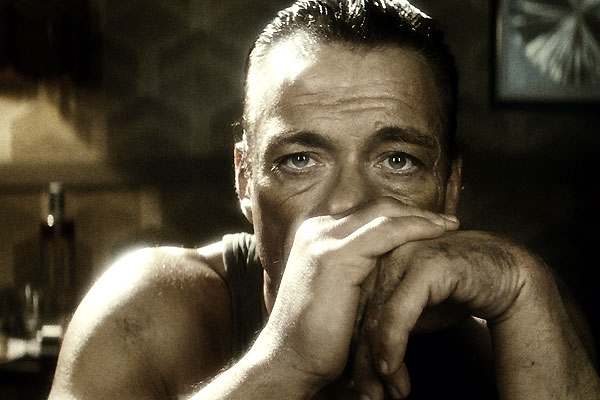 Tax problems, a losing child custody battle and an eclipsing career have changed the life of the man once known as the Muscles from Brussels. Now, Jean Claude Van Damme has to cope with cocky directors a quarter century younger than he is. And, he desperately needs a lot of cash to pay his enormous legal bills. A trip to the bank, though, turns into a celebrity hostage situation. At the center of it all is “JCVD.”

Cowriter (with Frédéric Bénudis)/director Mabrouk El Mechri and star Jean-Claude Van Damme ("Bloodsport," "Hard Target") take an original approach to reinventing a career with JCVD, in which the 'Muscles from Brussels' plays himself, back in his own home town after an exhausting stint in L.A. fighting for custody of his daughter (Saskia Flanders). Van Damme needs $465,000 wired to his lawyer by the end of the day, but when he visits a local post office to transfer the cash, he finds himself in a robbery/hostage situation. Meanwhile those outside who were excited to see the local celebrity misinterpret just what is going on, believing that Van Damme is the perpetrator. A "Dog Day Afternoon" type situation results as cheering fans are held behind barriers while police try to negotiate. The robbers, knowing a good thing when they have it, use Van Damme as their mouthpiece (and, wittily, he uses that leverage to get his money wired). The film constantly rewinds upon itself, presenting differing points of view that fill in the blanks for the audience. Technically the film is obviously low budget, locations kept to one back street Brussels intersection. "JCVD" exists for one reason only - to reintroduce audiences to a faded star who many never took seriously in the first place. To that end, Van Damme acquits himself very well, more intelligent, nuanced, self-deprecating and reflective than one would have expected. The film's highlight is a direct camera address, conducted from atop a hydraulic lift that places the actor in the rafters. Van Damme delivers a soliloquy of his life, offering explanations and reconsiderations of media coverage. Van Damme cries! "JCVD" isn't entirely successful as a film - after its on set establishing and courtroom scenes, it gets a bit confusing for a while, and it begins to run out of gas before its sentimental wrap (Van Damme may be down, but he is loved again), but it is as surprising a reconsideration of an action hero as one is likely to find.

After undergoing the humiliation of pandering to whims of the latest hot young director, the former action film superstar also has to figure out how to pay his legal fees. A trip to the local post office (which also functions as a bank) erupts in gunshots and the police see our former action hero peering guiltily out the PO window. Suddenly, it is not just a robbery but also a media event that will propel Jean Claude to headline status, though not the kind he wants. Mabrouk El Mechri directs this reinvention of one man’s failing career from a script by El Mechri, Frederic Benudis and Christophe Turpin. The story is a clever whodunit that twists and turns, coming back to the bank robbery several times, each time with a different point of view. What seems to be a Van Damme gone mad turns into a very different story as the camera goes into the post office to show the reality of the heist. I don’t want to give anymore away as the twisty screenplay should be fresh and new to the viewer. JCVD is a radically different person from the kickboxing star I first saw in the 1988 film, “Bloodsport” and John Woo’s American film debut, “Hard Target (1993).” He is older, more thoughtful and shows the wear and tear of the years he has plied his craft. His soulful eyes bear the weight of his five divorces, the custody fight for his daughter, a bout with drug addiction and a career that has seen better days. These life-affecting problems, though, make him very watchable and empathetic in “JCVD,” a film that may bring his career back to life like the phoenix rising from the ashes. Director El Mechri does a fine job with this intricate, always changing story that leads you down one path and POV only to change gears and put an entirely different spin on what we were led to believe is happening to the former martial arts movie star. Lenser Pierre-Yves Bastard keeps things dark and monochrome, lending to the melancholy mood of the film. Art direction by Andre Fonsny and set decoration by Francois Dickes also keep the mood dark. It has been many years since I have seen a Jean-Claude Van Damme film and “JCVD” shows a side of the man who is still fighting but, now, for his professional career.