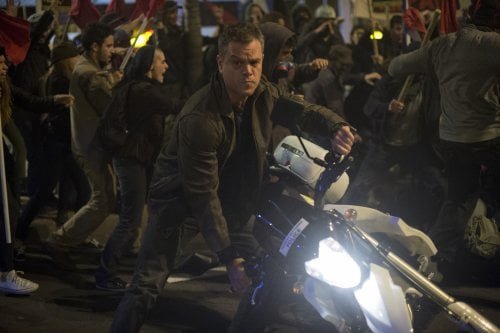 The soldier who was brainwashed and turned into a Secret Ops hit man with no memory of his identity or his training went to ground after learning his true identity and taking his revenge. But a new, globally structured program with more dangerous reach has sniffed out "Jason Bourne."

Surveillance. A motorcycle chase with surveillance. A foot chase with surveillance. Rinse and repeat until the climactic car chase followed by Bourne brand brutal hand to hand combat and all we've really learned is one more reason Jason Bourne (Matt Damon) has to rage against the C.I.A. The return of cowriter (with his "The Bourne Ultimatum" and "Captain Phillips" editor Christopher Rouse/director Paul Greengrass and star Damon (after 2012's Jeremy Renner one off, "The Bourne Legacy") adds up to the film's signature shaky-cam look (cinematography by Barry Ackroyd ("Green Zone," "Captain Phillips"), action bogged down by incessant tailing and a lot of very glum faces. When Bourne's old ally Nicky Parsons (Julia Stiles) enters a Reykjavik hacking farm and begins to download Black Ops files, the move is picked up at C.I.A. Headquarters by Heather Lee (Alicia Vikander, "Ex Machina"), an ambitious new agent who infects the software with tracking malware before shutting them down. Heather turns over her findings to CIA Director Robert Dewey (Tommy Lee Jones), tying Nicky to Bourne. Dewey immediately puts his Asset (Vincent Cassel, "Ocean's Thirteen," "Tale of Tales") on the case to eliminate the threat, but, much to his chagrin, Heather oversteps him in a meeting with National Intelligence Director Edwin Russell (Scott Shepherd, "Bridge of Spies"), stating that she believes Bourne is looking to come in from the cold, a potential asset for Dewey's Iron Hand program. There is also the matter of Deep Dream founder Aaron Kalloor (Riz Ahmed, HBO's 'The Night Of'), who is threatened by Dewey when he refuses to allow the C.I.A. back door access to his newly announced platform (the C.I.A. funded the startup, but Kalloor insists they've been repaid several times over). And Heather just happened to be Kalloor's college roommate... Who is playing who and why? The action skips from the Greek/Macedonian border, where Bourne is initially found participating in an underground fight ring, to Athens, where Nicky gets the drive into Jason's hands. In Berlin, Bourne tussles with the Assange-like Christian Dassault (Vinzenz Kiefer, "The Baader Meinhof Complex") and learns his own father wrote the proposal for the program that destroyed his life. In London, he seeks out ex-C.I.A. Malcolm Smith (Bill Camp, HBO's 'The Night Of') and learns the truth about his dad (which really doesn't wash as the C.I.A. would be creating an enemy out of an insider) while Heather figures out Dewey's working against her. Foot chases often seem interminable, Heather directing Assets following Bourne crosscut with Bourne and the assets on the street (accompanied by David Buckley ("The Nice Guys") and John Powell's ("Pan") monotonous take on the series' theme music). Things pick up in Las Vegas, as Dewey, Heather, Kalloor, Bourne and the Asset all cross paths. The car chase featuring the Asset in a police SWAT van gunning for Bourne is outrageous, his van ripping through traffic, metal shredding like confetti. The only newly intriguing aspects of this entry are the updated surveillance technologies evoking a 'you can run, but you cannot hide' Big Brother vibe and the post-Snowden collusion of Government with private technology companies to mine data. But this (slightly) new slant combined with a new revelation that doesn't hold water isn't enough to inject new life into the series. There is more mystery surrounding Heather than the man she's chasing. The entire cast is serious to a fault, not a single smile cracked through the two hour running time. "Jason Bourne" is a disappointing return, an actioner on repeat from a team who'd upped the ante. It only gets really interesting just as it's signing off. Grade: