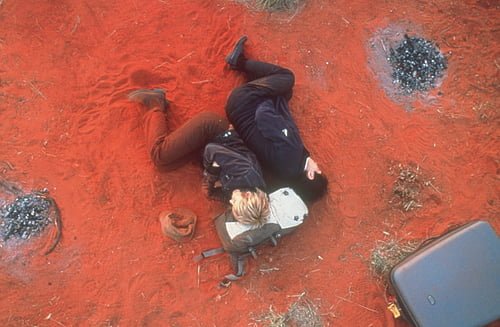 When the firm of Baird & Edwards is tasked with escorting a Japanese businessman on a tour of Australia's iron ore industry for mysterious reasons, owner Bill Baird (Matthew Dyktynski, "Love and Other Catastrophes") begs his partner Sandy Edwards (Toni Collette, "The Hours") to shoulder the burden due to his familial obligations. Disgruntled ("I'm a geologist, not a geisha."), Sandy nonetheless obliges and jumps into an extreme cultural clash that takes evolves in very surprising ways into Sandy's own "Japanese Story."

Director Sue Brooks pairs a screenplay (Alison Tilson) that is both horribly cliche and left-field twisty with stunning, symbolic landscape photography (Ian Baker, "It Runs in the Family") and a talented actress and leaves us vaguely unsatisfied. Fans of Toni Collette and alien environments will find this trip worth taking, although Sofia Coppola achieved richer results pitting both of her protagonists against Japanese culture in "Lost in Translation." Sandy begins on the wrong foot with Tachibana Hiromitsu (Gotaro Tsunashima) - she is late to pick him up at the airport, doesn't return his business card with her own and shows her every aggravation and irritation. In turn, he gets drunk at a rowdy karaoke bar, constantly jabbers on his cell phone in Japanese (subtitles tell us 'It's awful. They've given me a woman driver, she's loud and aggressive. She has a big bum.') and imperiously makes outrageous demands without regard for his host country's advice. This last tendency results in the duo being stranded in the middle of nowhere under life-threatening conditions. Forced to band together for survival, the relationship's foundation shifts dramatically and a love affair evolves, but before it is allowed to deepen into something we can get a handle on, a uniquely off kilter event changes the entire trajectory of the story. Collette gives a natural performance that keeps us engaged throughout the gamut of emotions her character undergoes. She gives her physicality a mannish aspect, befitting the no nonsense, rough and tumble lifestyle of an Outback geologist that makes for a nice contrast against Gotaro Tsunashima's handsome litheness. Yet despite Collette's work, the lovers remain an unlikely couple because although it is believable that Sandy would find beauty in the businessman's physical appearance, little is done to overcome those initial cultural differences (in fact, we see Tachibana's continued annoyance in subtitled voiceover when Sandy tries to teach him the difference in the pronunciation of desert vs. dessert). Furthermore, his character is made less honorable by the revelation of a wife and child after the affair has begun, although their existence is integral to the film's last, more affecting, act. Baker's talent for showcasing landscapes is immediately apparent during the title credits, which unspool against Australian desert that looks like a Japanese sand garden on Mars, all brilliant autumnal red. He drops his subjects into the environment in a manner that accentuates their smallness, in one scene pulling focus for an alienating, mirage-like effect. The last shot of the film is a stunner, with Sandy looking out at an airliner whose nose is pointed back at her like a bullet. Original Music by Elizabeth Drake adds to the exotic atmosphere. "Japanese Story" offers many terrific individual moments, but the vague definition of its central relationship keeps us at an emotional distance.

Sandy Edwards (Toni Colette) is a first-rate geologist working for a mining company in the rugged wilds of Australia. When the son of a Japanese business magnate comes to town, the possibility of new capital pushes the company bosses to bend over backwards or, at least, have Sandy do so in "Japanese Story." The young man from Japan, Tachibana Hiromitsu (Gotaro Tsunashima), treats Sandy as his servant from the very start, expecting her to handle his bags and drive him wherever he wishes. The strong-willed and confrontational geologist is forced to show constraint if she wants to keep her job. The friction grows as Sandy watches, in her mind, the managers all kowtow to the scion of the holder of 8% of the company's stock. She is doubly exasperated as Hiromitsu ignores her, talking about Sandy on his cell phone - in Japanese, of course - as they drive. Then, he insists that they take a side trip into a remote part of the outback. The "two cultures collide" story line that takes up the film's first half changes radically when the two strangers are stranded out in the middle of nowhere because of Hiromitsu's naïve insistence that they make the treacherous journey into the remote Pilbara Desert. The trek over the rugged roads is against Sandy's prudent advice and they soon find themselves stranded. Unable to use their cell phones, Sandy and Hiromitsu are thrust into a near impossible and dangerous situation. They must work together if they are to save themselves and work hard they do. They get themselves out of the predicament, finally, and they know their relationship has changed. The pacing of "Japanese Story" also changes, gearing down to slower speeds as the inevitable romance between foreigners - and the mutual newfound understanding of each others culture - takes place. Then, tragedy occurs and the film changes gears once again. The multiplicity of stories - cultural conflict, romance and sad calamity - affects the pace of "Japanese Story" and is the film's weakest element. The screenplay, by Alison Tilson, lacks the subtle flow needed to better transition between the drastic changes of mood and tone placed upon the characters. A strongpoint for the film is the outstanding cinematography by veteran lenser Ian Baker. His shot compositions, using the vast and varied Australian landscapes as backdrop, are breathtaking. The production does an effective job in showing Australia in a sometimes lush, sometime bleak and desolate way. Toni Collette, once again, proves that she is one of the world's most versatile actresses. She plays Sandy Edwards as a tough and extremely capable young woman. Her trial by fire in the outback with Hiromitsu is the catalyst for needed change and she develops a new, kinder and more understanding persona. Newcomer Gotaro Tsunashima, unfortunately, is not equal to his costar and Collette overshadows his ineffective docility. The character Hiromitsu is a spoiled young man who basks in his father's power. He simply makes bad decisions, especially his last, and never garners any sympathy. More sympathetic, in a small role, is Yumiko Tanaka as Hiromitsu's loyal wife, Yukiko. "Japanese Story" is an uneven effort with cinematographic excellence that is almost, but not quite, enough to recommend it.