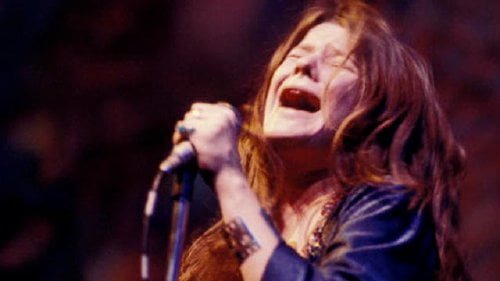 Janis Joplin was a blinding flash in the music world of the 1960s, creating some of the most iconic music of that era, burning out just as quickly. Documentary filmmaker Amy Berg, through the singer’s letters to her family, friends and collaborators, tells the story of Janis’ meteoric rise and tragic fall in “Janis: Little Girl Blue.”

Using the letters Janis wrote to her family back home in Port Arthur, TX, director Amy Berg fashions a portrait of the iconic blues singer that illustrates a woman looking for love. It's heartbreaking. As a young girl, Janis never fit in, bullied by her peers. When she attended college in Austin, she was voted the 'ugliest man,' but she also fell in with the local music scene and, finally, found her place. Eventually moving to San Francisco, Janis's career found its footing but her flirtation with heroin began, too. Eventually her friends became so concerned, they sent her back home. Through her letters to her parents and two siblings, both of whom comment frequently here, we see another side of Janis, not the rock 'n roll chick, but a little girl looking for love and acceptance. There was a far softer side to Janis than most of us knew. Her love life is also surprising, one man she considered a partner dismissing their alliance as 'friendly,' an American she randomly met on Ipanema Beach a potential real love match. But he had charitable work to move onto and couldn't deal with the drugs he'd helped her kick (we see him today, sitting sadly in a bar). Dick Cavett obviously adored her, hinting at a romantic liaison. If "Amy" showed how fame can kill, "Janis: Little Girl Blue" explains that Janis wanted fame for the love it would bring, only to find it fleeting. The DVD from MVD Entertainment Group includes a segment on San Francisco's Avalon and Fillmore venues, the Big Brothers performing acapella and Janis's sister and brother at her induction into the Hollywood Walk of Fame. 'Influences' features Pink, Juliette Lewis, Melissa Etheridge and others discussing Joplin's impact on rock. Grade:

The very first thing you notice while watching “Jane” is the phenomenal quality and clarity of the lost footage shot by wildlife photographer (and Jane’s husband for a time) Hugo van Lawick. There is love in every bit of his footage of his years filming the chimpanzees in their natural environment. Fully one third of the film are the many images of Jane Goodall as she looks through binoculars or at the camera, hikes the rough jungle and interacting with her subjects. The subjects, the chimpanzee community in Gombe, are the reason to give “Jane” your attention. That and the fact that Goodall did something no professional wildlife researcher had ever done before and showed us a world hitherto unseen and unknown. The intent of her research at the Gombe Stream National Park in Tanzania, way back in the early 1960s, was to study chimpanzee behavior to try to find a clue to the behavior of early man. Jane Goodall, with enormous patience and bravery – you try sitting passively while a 300 pound male chimp charges at you – found many similarities not only with early man but with us, the so-called modern man. The chronicle shows us, through Goodall’s eyes and van Lawick’s lens, that her simian subjects exhibited such human traits as affection, fear and jealousy – and extreme brutality and violence. You get to know the individual members of the chimpanzee community that accepted Goodall as a trusted friend: David Gray Beard, Goliath, MacGregor, Flo and her mischievous son Flint. When bad things happen to the community – like a man-caused polio epidemic and actual warfare – you are emotionally compelled to care. While we learn a great deal about chimps in the wild, documentary filmmaker Brett Morgan (“Chicago 10 (2007),” “Kurt Cobain: Montage of Heck (2015)”) also delves into Jane’s family life: her collaboration and marriage (and divorce) to van Lawick, the birth and raising their son, affectionately nicknamed “Grub,” and the celebrity that her research sparked - TV interviews and lectures on her experiences in the wild – are all given good shrift. It is a fascinating story about an amazing woman.