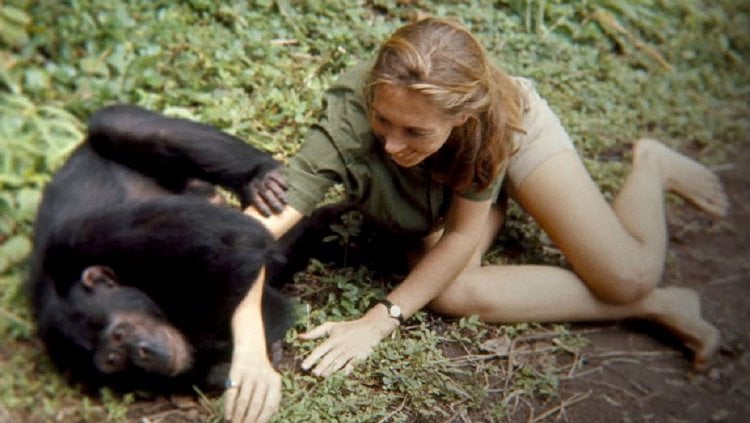 At the tender age of 26, Jane Goodall, with no experience, was chosen by her boss, Dr. Louis Leaky, to journey to Tanzania to collect data on chimpanzees, something never done before. One hundred hours of film from her early days in a career spanning 55 years has come to light in “Jane.”

When writer/director Brett Morgen ("Cobain: Montage of Heck") was approached by National Geographic to make a documentary about Jane Goodall, he initially turned them down. Then he learned about the 100+ hours of never seen footage shot in the early 60's by acclaimed nature cinematographer Hugo van Lawick, footage that had been thought lost. It was not only breathtakingly beautiful, but groundbreaking and extraordinarily well preserved. Morgen set to work cataloging the unmarked reels and writing the definitive work on the first human to study chimpanzees in the wild, "Jane." Most people probably know who Jane Goodall is, but I doubt many now remember just how unusual a choice she was to send to Gombe, a secretary with no degree whose passion for animals and open mind convinced Dr. Leakey she was the one to be the first to do field research with chimps. Leakey believed a study of these animals would lead to revelations about primitive man. What Jane discovered was a lot more than he or she had bargained for. Morgen doesn't use Lawick's film in chronological order, instead finding footage and identifying the apes that would form his narrative, so although Jane was alone for five frustrating, painstaking months trying to win the animals' trust when she could find them, we nonetheless can watch footage that matches earlier experiences. Morgen made the unusual decision to use Goodall’s audio recording of her 1999 book 'Reason for Hope' as narration, and it works beautifully, her clear, patrician voice recounting her solitude, her daily exertions and finally the wonder of being accepted by the apes who'd previously run. 'To stare into the eyes of a chimpanzee is to see a thinking, reasoning being staring back.' Jane describes her incredibly supportive mother, who came to stay with her in her camp, setting up a clinic for the locals (it is unclear if Jane was ever entirely alone - at first she says she was, later saying a companion was considered a necessity for a young woman in that part of the world). Jane wasn't too happy that Lawick was coming to document her research, but understood the necessity. Lawick's footage reveals the romance that blossomed between two like-minded adventurers. During his stay, the first of her apes visited her camp, stealing bananas from her tent. Jane began to supply the treat, but soon so many apes arrived, aggressions broke out so fiercely, Jane and Hugo had to take cover. She evolved her approach. When Hugo finally had to leave, Jane missed him. Then a telegram arrived asking her to marry him. Back home she was a media sensation, the blonde beauty who discovered apes behaved much like humans. Returning to Gombe, Jane was thrilled to learn Flo, the older female she and Hugo had documented mating, had given birth. Jane named Flo's baby Flint and set about observing the mother and child bond. Later, when she and Hugo had their son, Grub, she claimed Flo was her best teaching resource. But Jane's Gombe paradise was headed for tragedy. First polio struck the ape colony. Its aftermath was even worse, the colony splitting in two, treating each other as strangers. One half murdered the other, disillusioning the woman who thought her apes were better than us. She concluded that man's evil is of a deeply genetic nature. This part of the film is harrowing and Jane's life took a bumpy path, Lawick's work taking him away while Jane refused to leave hers in Gombe (they later divorced, although remained friendly). Students arrived who continued much of her field work as she raised Grub. Morgen weaves recent interviews with Jane into his decades-spanning work. We can appreciate the enormity of Jane's research by his occasional animations of her copious graphs, charts and movement maps. Philip Glass's score adds grandeur. "Jane" is a one-of-a-kind biographical nature documentary, the story of a young woman who dared to get close to the powerful creatures who would mold her entire life as she studied and came to love them. Jane Goodall is a treasure and so is Morgen's documentary. Grade:

The very first thing you notice while watching “Jane” is the phenomenal quality and clarity of the lost footage shot by wildlife photographer (and Jane’s husband for a time) Hugo van Lawick. There is love in every bit of his footage of his years filming the chimpanzees in their natural environment. Fully one third of the film are the many images of Jane Goodall as she looks through binoculars or at the camera, hikes the rough jungle and interacting with her subjects. The subjects, the chimpanzee community in Gombe, are the reason to give “Jane” your attention. That and the fact that Goodall did something no professional wildlife researcher had ever done before and showed us a world hitherto unseen and unknown. The intent of her research at the Gombe Stream National Park in Tanzania, way back in the early 1960s, was to study chimpanzee behavior to try to find a clue to the behavior of early man. Jane Goodall, with enormous patience and bravery – you try sitting passively while a 300 pound male chimp charges at you – found many similarities not only with early man but with us, the so-called modern man. The chronicle shows us, through Goodall’s eyes and van Lawick’s lens, that her simian subjects exhibited such human traits as affection, fear and jealousy – and extreme brutality and violence. You get to know the individual members of the chimpanzee community that accepted Goodall as a trusted friend: David Gray Beard, Goliath, MacGregor, Flo and her mischievous son Flint. When bad things happen to the community – like a man-caused polio epidemic and actual warfare – you are emotionally compelled to care. While we learn a great deal about chimps in the wild, documentary filmmaker Brett Morgan (“Chicago 10 (2007),” “Kurt Cobain: Montage of Heck (2015)”) also delves into Jane’s family life: her collaboration and marriage (and divorce) to van Lawick, the birth and raising their son, affectionately nicknamed “Grub,” and the celebrity that her research sparked - TV interviews and lectures on her experiences in the wild – are all given good shrift. It is a fascinating story about an amazing woman.