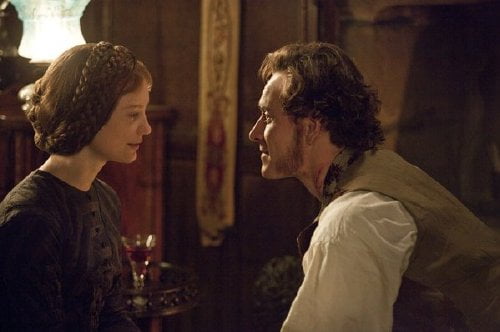 An orphaned English girl is tormented by her cousin and unfairly banished to Lowood, a charity school of harsh discipline. Her education, though, merits her a position of Governess to Adele Varens (Romy Settbon Moore), a young French girl living in the grand, remote Thornfield Hall, whose brooding master Rochester (Michael Fassbender, "Hunger," Inglourious Basterds") becomes intrigued by the unique character and comportment of "Jane Eyre."

Following up his illegal immigrant/gang war saga "Sin Nombre" with yet another version of "Jane Eyre" would seem an odd choice for director Cary Fukunaga, but in so doing the filmmaker proves his versatility and a talent for using time and place to establish characters. The contrast of monied society against harsh rural landscapes informs the passions which arise beneath bred restraint in both Jane and Rochester. Fukunaga, working with Moira Buffini's adaptation of the charlotte Brontë novel, has made a period film lush in its details but stark in its lead characters' outlooks. He only stumbles adding a note of mysticism to his climax which is awkward and entirely unnecessary. The story is well known, but here the bulk of the action is framed as a flash back. The film opens with Jane (Mia Wasikowska, "Alice in Wonderland," "The Kids Are Alright") frantically departing Thornfield Hall, the landscape highlighting her isolation, finally finding shelter at the home of a cleric, St. John Rivers (Jamie Bell, "Billy Elliot," "The Eagle"), and his sisters Diana (Holliday Grainger) and Mary (Tamzin Merchant, 2005's "Pride & Prejudice") who look upon her company as entertainment. Jane introduces herself as Jane Elliot and remains as much a mystery to the Rivers as she and Rochester were to each other, but once the serious cleric finds a humble school teaching position for Jane, it is clear he hopes to weave her into the fabric of his future. But Jane cannot forget Rochester. When she startles his horse he is glowering and fails to introduce himself. He has an odd relationship with his charge, Adele (quite obviously the spawn of a paid assignation) and little patience for his housekeeper, Mrs. Fairfax (Judi Dench), the first adult to have ever shown Jane kindness. But Jane's talents, intellect and backbone have clearly engaged him and it doesn't take long before the young girl is lost in romantic reverie. But everything about life in Rochester's estate is a mystery - he seems to be wooing Blanche Ingram (Imogen Poots, "28 Weeks Later," "Solitary Man"), a woman more his equal; strange things, including a fire in his bedroom, happen at night and Jane is called to tend the serious wounds of an uninvited guest who is dispatched hastily the next morning. The material is ripe for delirious melodrama but Fukunaga uses a restraint that allows the characters and their reactions to extreme situations to shine through. Wasikowska is quiet, keeping to her station, but her reactions to Rochester's wooing when alone show the bloom of first love and she is never cowed in coversation. Fassbender is incredibly sexy as the man raging against a fate he cannot unburden himself of yet shows an ironic decorum in polite society. They make their unlikely romance believable. Judi Dench resists overdoing Fairfax, making her gossiping feel like the natural need for conversation with the younger woman. As young Jane, Amelia Clarkson establishes the resolve and willingness for forgiveness that will be part and parcel of the adult. "Creation's" Freya Parks is an angelic Helen Burns without being cloying. Sally Hawkins ("Made in Dagenham") and Craig Roberts are hissable as Jane's aunt and her odious son (Fukunaga turns up the volume in their home which has the result of making Lowood almost tolerable in comparison, a good choice). When finally revealed, Rosie Cavaliero's ("Vera Drake") Grace Poole is more human, less cliched Victorian lunatic, than has been seen in prior versions. The production team has done a beautiful job creating a beautiful film that is true to its time. Dario Marianelli's (2005's "Pride & Prejudice," "Atonement") score is just unusual enough to distinguish itself while still being true to the genre. I loved the last theatrical adaptation of this classic back in 1996, but Fukunaga's version had me falling in love all over again.