Jane B. for Agnès V. 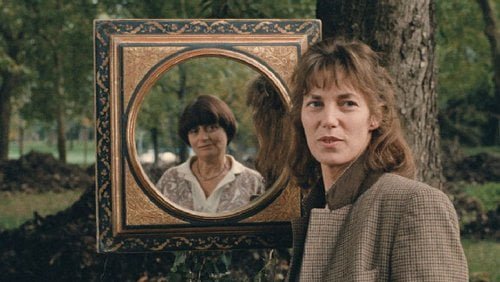 She was a British model who whose first foray into films were "The Knack" and Antonioni's "Blow-Up." When she traveled to France, she became the long time lover of Serge Gainsbourg who made her a pop star with their duet on “Je t’aime … Moi non plus." Hermes created the Birkin bag for her that now commands prices up to $150,000. Back in the 80's, she fascinated French New Wave director Agnès Varda, whose collaboratory and most unconventional documentary on her would immediately lead to a second film, a family project involving both their children. Released for the first time in the U.S. in a 2K restoration blu ray from Cinelicious Pics is "Jane B. for Agnès V."

The first part of an intertwined double bill is a most imaginative biographical documentary, one in which the director pursues a subject who is initially reluctant to face the camera lens, a paradox who takes on multiple personas to reveal herself. Varda's whimsical pas de deux (the director is a frequent presence in the film) begins with a tableau in which Birkin takes the place of the subject of a 16th century classical Titian painting, yet she talks about an experience of vomiting after drinking too much sweet sherry. In a cafe, Varda asks Birkin why she never looks directly at the camera, Birkin replying that it is too personal. Varda suggests she instead think of the lens as a mirror and the icon relents as Varda places a mirror in a forest, subject and artist both appearing within its frame (the theme of artist and muse is a constant - a skit with Philippe Léotard ("La Balance") casts him as a painter, Birkin as his dealer, a squabble over money fatally revisited). Varda gift wraps Birkin's house so that she may unwrap it for us, giving us a tour, fantasizing about how she often wonders if the bank who still owns 1/3 will show up to cohabitate (Birkin is then transformed into a poverty stricken mother - in reality she is the mother of three daughters by three different men, the two youngest, Charlotte Gainsbourg and Lou Doillan appearing in the film with her). Birkin declares she'd rather be seen as a 'woman on the street' with her messy hair, old sweaters and jeans, yet she also loves fame, money and glamour. There is also always the shadow of Gainsbourg, who is seen here coaching her through a recording session juxtaposed with her live performance of the same song. 'I'm immortal, but dumped,' she tells Varda, Gainsbourg's death having left a huge hole. Varda's film has the playful falling-down-the-rabbit-hole inventiveness of Rivette's "Celine and Julie Go Boating" as we see Birkin as Laurel to Laura Betti's ("Fat Girl") Hardy, playing at magical picnicking with Jean-Pierre Léaud ("The 400 Blows"), trying her hand at flamenco or suffering as Joan d'Arc. Varda's production is astounding, a repeated mirror image of her subject in a circular take as mesmerizing as Orson Welles's climax of "The Lady from Shanghai." There is a break as Varda discusses the state of the film and where it should go. Birkin lays out her ideas for what will become "Kung-Fu Master," the accompanying film on Cinelicious's disk which is alluded to frequently with a Paul Delvaux painting of a nude woman and young boy. The English model who became a French icon, who loves Christmas because it brings back childhood, celebrates her 40th birthday at film's end, the milestone which inspired the film. Birkin proves a magnificent muse for Varda's artistry in this introspective and enchanting film. Grade: