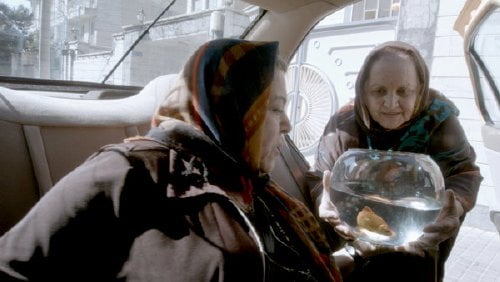 On the streets of Teheran, an affable taxi driver wearing a cap picks up passengers from all walks of society. He is recognized by the passenger who stays with him the longest, a bootleg DVD seller thrilled to be riding in "Jafar Panahi's Taxi."

Writer/cinematographer/editor/sound mixer/director Jafar Panahi ("The Circle," "Closed Curtain") won the 2015 Berlin Golden Bear for his third film made under an Iranian sentence banning him from filmmaking for twenty years. Like Abbas Kiarostami before him, whose "Ten" also took place within a vehicle, Panahi's made his first 'found footage' film. Utilizing a dashcam, cell phone footage and his niece's camera, the director presents a picture of Iranian society while also commenting upon the act of filmmaking itself. Are Panahi's passengers real people or actors playing parts? That third passenger, the guy who has delivered DVDs to his driver's door, asks this very question and while he and a woman later introduced as a friend are likely playing themselves, Panahi's actual niece Hana Saeidi is such a scene stealer and Panahi's themes so constant, it is safe to assume they're playing roles. If so, they've certainly been well directed, the question itself an indicator of the film's artlessness. The yellow cab is first seen ride sharing, a boisterous man in the front stating that the people who've stolen the tires off a poor man's car should be executed, the female passenger in the back objecting that he's quick to condemn. He'll only agree to tell her what he does for a living after he's exited the vehicle and his answer presents a political analogy. And then there is that bootlegger, as sure a statement on the director's own calling and their Iranian status as could be made, offering Panahi yet another platform to remind us of his own filmography. Tone changes dramatically as Panahi and the bootlegger come across the scene of an accident. A bloody, injured man is piled into the back seat along with his wailing, younger wife, Panahi panicked over directions. But as the woman's hysteria grows, her husband begins to give his last will and testament, one which the driver documents on his phone, ensuring that the young wife will receive the man's property and not be claimed by either of his brothers. The film's prior, more humorous air returns as Panahi's repeatedly called by the wife, desperate to retrieve his video even though her husband's survival is assured because 'you never know.' (While the situation is amusing, it has also been Panahi's agenda to call attention to women's rights.) The director's inexperience in his cinematic occupation is once again in the foreground as two old women carrying a goldfish in a bowl beg him to take them to a park by noon. Unfamiliar with the route and unable to guarantee their arrival (their reason reveals Iranian superstition), he transfers them to another cab when he realizes he is late picking up his niece at school. Panahi most obviously rails against his country's censorship via Hana. The precocious young girl is first bitterly disappointed that she cannot show off her famous uncle to her friends in his guise as a lowly cab driver, then rattles off the 'rules' her teacher has given the class on filmmaking (Panahi takes pains to break all of them). Intent on making a 'distributable' film for class, Hana pleads with a thief to return money her camera caught him stealing as crime cannot be portrayed in Iranian cinema. Panahi's Mona Lisa smile that is present throughout mostly disappears during his discussions with his niece, although her forthright manner charms it back. After finding his female lawyer on the street and offering her a ride, a final act of charity finds no good deed remaining unpunished. "Taxi" is certainly the most entertaining of Panahi's forbidden works, but it is also a rich experience full of human drama, comedy and ideas. The filmmaker has turned civil disobedience into its own genre. Grade: