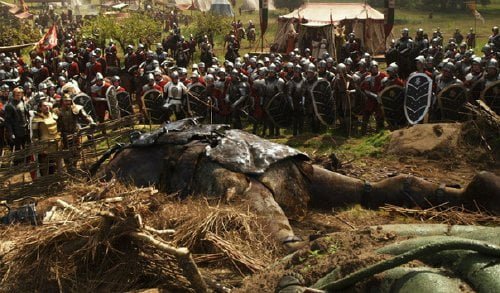 Jack (Nicholas Hoult, "Warm Bodies") is a farmhand who finds himself communing with kings and princesses after he mistakenly opens a gateway that allows a race of giants to once again roam the earth and claim it for their own. The young lad, astonished to discover the old legends are true, also surprises himself with the fortitude he finds as he becomes known as "Jack the Giant Slayer."

Fee Fie Ho-Hum. It's really dispiriting to see all the talent in front of and behind the camera expending so much energy on this by-the-numbers product about which all I can say is that there's a lot of CGI, it's in 3D and the kiddies might like it if they're not too scared. Writers Darren Lemke ("Shrek Forever After"), Christopher McQuarrie ("The Usual Suspects") and Dan Studney (TV's 'Phantom Investigators') expand upon the English folk tale 'Jack and the Beanstalk' by throwing in a princess to be rescued and turning the giant into an entire tribe who were previously defeated by a King whose sacred crown can now control them, but you'll find no surprises here. Director Bryan Singer ("The Usual Suspects," "X-Men") lets the whole affair ramble on too long with its puffed up mythology to its inevitable conclusion. Hoult, so charming in "Warm Bodies," is a stock figure, the not-all-that-incompetent farm boy who ends up falling in love with Isabelle (Eleanor Tomlinson, "Alice in Wonderland"), an adventurous princess. When she's swept away on a beanstalk, he insists on accompanying King Brahmwell's (Ian McShane, "Pirates of the Caribbean: On Stranger Tides") knights Elmont (Ewan McGregor, "The Impossible") and Crawe (Eddie Marsan, "Sherlock Holmes: A Game of Shadows") and the princess's scheming fiance Roderick (Stanley Tucci, "The Hunger Games") and his right hand man Wicke (Ewen Bremner, " Fool's Gold") to save her. These giants have long, lean legs and disgusting habits which include biting the heads off people. The film's rating demands that the camera cuts away or obscures the killings, but not the retrieval and eating of snot. Some effort has been made to give the giants distinct visual character, but their personalities are interchangeable. The only nice bit of invention involves a propped up ermine cloak which the king climbs into and out of for his portrait, which is being painted with the aid of a camera obscura. Tucci adds as much flavor as he can and McGregor is almost comically earnest, but there is little they can do to pull this bloated production out of the mire.