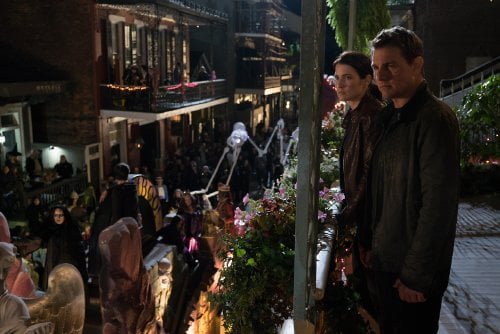 When Jack Reacher (Tom Cruise) returns to his old military unit's headquarters, he finds out colleague Major Susan Turner (Cobie Smulders, "Avengers: Age of Ultron") is being held for espionage so he helps her escape then sets out to figure out why she was unjustly accused in "Jack Reacher: Never Go Back."

Chilean director Pablo Larraín ("No," "The Club") and star Natalie Portman dig deep to give us a complex portrait of Jackie Kennedy, a woman who clearly felt like an outsider, a private person playing a very public role during a time of national mourning. Larraín and "Allegiant" (!) screenwriter Noah Oppenheim have come up with a very effective structure, using Jackie's televised White House Tour as a touchstone to comment upon statements she makes to Crudup's unnamed journalist (many of which she retracts immediately upon stating). Other flashbacks reveal the assassination and its aftermath, a state dinner and Jackie's conversation with a priest (John Hurt), held at RFK's (Peter Saarsgard) urging. Portman eerily reconstructs Jackie, although her breathy delivery frequently recalls Marilyn Monroe more than the widowed First Lady. This no hagiography, instead a portrayal which shows a woman conflicted in her feelings for her dead spouse yet fierce in establishing his place in history. She shows disdain for the Johnsons (John Carroll Lynch and Beth Grant) and shames Jack Valenti (Max Casella, "Blue Jasmine") into insuring she and leaders of state would walk with Kennedy's coffin, a move the White House thought too dangerous. We witness her resentment of criticism of her White House redecoration, something she accomplished with her own funds (she's determined, too, to not allow items she paid for to be swept into archival storage, the very place she'd brought several historical pieces back from with curatorial flare). For a woman admired for her decorum, Jackie was also determined to push the tragedy of what happened in Dallas into public view, refusing to change her blood stained suit, insisting Carolyn and John Jr. be at her side during the funeral to emphasize the loss. Cinematographer Stéphane Fontaine ("Captain Fantastic," "Elle"), who shot the movie on film, uses rigidly composed frames for the interview which anchors the film while operating more fluidly in flashbacks, a device which mirrors Jackie's carefully composed legend building against real life. The actual assassination, as seen from her perspective, is shattering and gory. Mica Levi's ("Under the Skin") score seems to melt under the weight of itself, adding a vaguely sinister undertone. With "Jackie," the politically minded Lorrain has found chilling clarity in a White House transition during a national tragedy and the complicated and defiant reaction of the woman left in its wake. Grade: