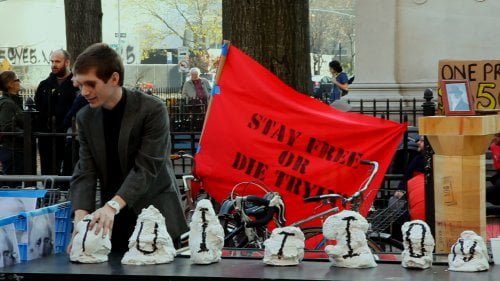 With student debt in the United States having gone beyond the $1 trillion mark, many are beginning to question whether the cost of a college education, which has increased 1120% from 1980 to 2010, is worth it. Writer/director Andrew Rossi ("Page One: Inside the New York Times") investigates alternative methods and schools while establishing that those seeking public and especially private traditional higher education are increasingly sitting in an "Ivory Tower."

Here's a documentary that should be of interest to any kid thinking about his future or the parents socking away money for their children's college fund. Rossi's work can stand beside many which have focused on the corporatization of the United States, from health care to the food industry, and how increasingly it is only the wealthy with access to basic human rights. (...and ding, ding, ding - doesn't Rossi serve up that politician who once again appears to lie at the root of this country's erosion of the middle class, Ronald Reagan, who essentially created student loan debt after deeply cutting assistance programs, stating that students should be paying for their own educations. Later, Senator Elizabeth Warren's on hand to note that the government has made $158 billion on student loans and that 'the whole system stinks.') Rossi begins with Harvard University which he deems the very DNA of America's higher education system. He also asserts they began a 'race' among Ivy League colleges who now spend hundreds of millions building new facilities (at $300 million, MIT's Strata Center is deemed the most extravagant by far). He then uses Arizona State as an example of what has happened to public universities, which now cater to such things as luxury condo living with pools while dismissing their reputation as a premier 'party school.' Yet it is that very moniker that is largely responsible for a huge uptick in out of state students, customers who pay a higher premium to attend. The documentary then moves onto alternative forms of education. Extensive travel and self education are briefly touched upon, but there is a free alternative two year all male college called Deep Springs whose students attest to the benefits of constant challenge and the learned concepts of 'putting yourself in someone else's shoes.' Then there's NYC's Cooper Union, a college founded to aid the disenfranchised which has funded itself for 150 years with real estate holdings until its current president Jamshed Bharucha decreed that the only solution to balancing the budget was to start charging tuition, a move which initiated a series of protests and vote of no faith. More radical ideas include free, online education, a concept still in its infancy that hasn't yet proven itself. Udacity's failure indicates face to face instruction is a vital component - and Boston's Bunker Hill Community College's hybrid approach (using MIT's EdX) appears to be headed in the right direction. A bevy of self-made billionaires like Bill Gates, Steve Jobs and Mark Zuckerberg, all college dropouts, are examples used to bolster the Thiel Fellowship, which grants $100K to students willing to drop out and form their own businesses. The documentary does ramble a bit, while also echoing points made more eloquently in Frederick Wiseman's "Berkeley." But Rossi's more traditional statistics and talking heads approach has its merits - his best capper - the securities rating firm Moody's now asses higher education in the negative. Shocking indeed.

The average college graduate faces $30000 or more in student loans, loans that will take years to pay off. And, for those who are in or plan to go to college, costs for education are rising faster than any other sector of our economy. What we consider traditional higher education is in danger, with fewer colleges educating fewer students. Director Andrew Rossi explains how this all came about and what the future may hold for the “Ivory Tower.” Watching Rossi’s interesting documentary, it makes me glad that the struggling for a higher education is only something of my distant past. Right now, the total accumulation of student loans amounts to well over one TRILLION dollars and this sum is only going to increase. Besides the increasing student debt, tuitions are always on the rise making the possibility for most young people to think of getting a college degree a fast receding dream. And, once they get it, they face unemployment and under-employment. What can they do? Get an even higher education at even higher costs. There is a ray of hope in the future, though, with the advent of on-line higher education. Students can access college level services that put the emphasis on the students and teachers, not the high administrative costs accrued by the traditional brick and mortar institutions. But, it may not be enough. “Ivory Tower” is a cautionary film that may be too late to effect much change, for the better, for our college and post-college educational system. One frightening idea is that we are coming full circle where only the wealthy can afford an education, giving the 1% even more clout.