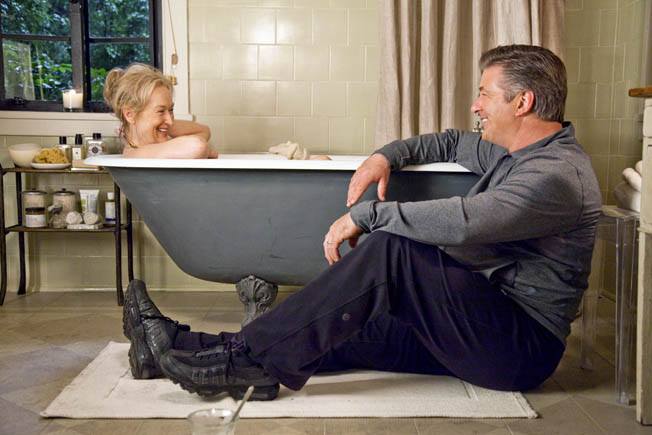 Jane attends her son’s college graduation where she inevitably bumps into her ex of ten years, Jake (Alec Baldwin), who is married to a much younger, va-va-voom hottie. Sparks fly, once again, for the former couple and Jane, formerly the wife, is now the mistress. Things perk up even more for her when she hires architectural engineer Adam (Steve Martin) to renovate her vast kitchen and sparks, again, fly in “It’s Complicated.”

Ten years after their divorce, Jane (Meryl Streep) is surprised by her ex Jake's (Alec Baldwin, TV's "30 Rock") nostalgia when they meet at a 30th anniversary party for mutual friends, but the spell is broken when his much younger wife, Agness (Lake Bell, "What Happens in Vegas") arrives, midriff and fangs bared. But she's not around when the family gathers in New York City for son Luke's (Hunter Parrish, SHOTime's "Weeds") graduation and Jane and Jake's chance meeting at the Regency's bar leads to bed. Jane is further confused by the attentions of a new man in her life, Adam (Steve Martin, "The Pink Panther 2"), the architect who is building her long-dreamed of kitchen addition. All in all, "It's Complicated." Writer/director Nancy Meyers ("Something's Gotta Give") dishes out another serving of middle-aged female fantasy where a divorced woman in her fifties looks fabulous, is fought over by two men, loved by her three handsome children, supported by her three squealing girlfriends, lives in a multi-million dollar hacienda with a garden that looks designed by Martha Stewart and owns a booming bakery cafe business. It's as if Meyers has given Streep an outlet to indulge any vanity her late career surge has instilled in her. The film's three stars do manage to make much of this material work, but there is plenty going on around them to drag one out of the experience. Finally settled as a single, Jane is now facing empty nest syndrome as her youngest, Gabby (Zoe Kazan, "Me and Orson Welles"), heads to college. She warily visits a plastic surgeon regarding the drooping skin over her eyelids (skin which is otherwise taut throughout the rest of the film), but runs in horror when she hears what the procedure entails. When the elevator opens on a lower floor, she's astonished when Pedro (Emjay Anthony), the wild child Agness bore before cheating on Jake, enters, followed by mom and Jane's ex, all headed from a fertility clinic! Satisfied that she is above the cliches that now envelop her husband, Jane returns to her fabulous life in her chic cafe clogged with customers and her plans for her new addition (because her current Better Homes and Gardens kitchen, complete with window herb garden, is just not ostentatious enough). These plans come along with Adam, a kind, handsome and cultured man still in the throes of divorce recovery, but while Jane is attracted to him, she cannot ignore the wicked deliciousness of having an affair with her own ex-husband. (When together with her three friends - Trisha (Rita Wilson, "Auto Focus," "Old Dogs"), Joanne (Mary Kay Place, HBO's "Big Love") and Diane (Alexandra Wentworth, "Office Space," TV's "Head Case") - Jane bubbles over with the news that 'I'm having an affair with Agness Adler's husband!,' greeted with enthusiasm just short of a pillow fight.) There are also several foodie scenes (Jane learned to cook in Paris, just like Julia), notable in that Jake eats her food while Adam gets a shot at cooking alongside her. Streep, outfitted in elegant flowing outfits, spends a good amount of the film giggling, but her humor is infectious. Baldwin, who is getting some Oscar buzz for this role, is playing a gentler spin on his '30 Rock' role, but admittedly socks over some really good lines, bravely bares a not terrifically toned bod and also shows a good, slow burn of jealousy and regret. Martin is extremely likable here, the suitor to root for, although Meyers plays both ways so evenly her conclusion is merely a declaration lacking in foundation. Support is bland, from Jane's interchangeable three children to her three shrieking friends. As the eldest's fiance, Harley, John Krasinski plays the audience's point of view but he's merely doing his reactive "Office" schtick, barely able to keep from looking directly at the camera. Lake Bell is given a bad lot as the younger wife who has nothing to recommend her but her toned bod - she is at least given Jake's excuse of being shot full of hormones, which is the new marital sticking point du jour as also evidenced in "Did You Hear About the Morgans?". The film's highlight is a second graduation party which Jane attends stoned on a hit of a joint left for her by Jake. She proceeds to smoke behind the bushes with her date Adam, then is joined by Jake in the bathroom where Harley barges in. It's the joint that keeps on giving, but the actors have fun with it. Nonsensical behavior abounds, though, as when young Pedro cross examines Jake about his having taken a shower in his clothes from outside the bathroom door or when Jane's three children, who look on misty-eyed whenever mom and dad act civilized together, are traumatized by learning of their affair ('we're still getting over the divorce!' - really?). In "Something's Gotta Give," an older, attractive woman with a dream career living in a dream house who hasn't had sex in too long is desired by two men, the second of which is introduced in a professional capacity (Reeves' doctor to Martin's architect). The older male can be shown partially nude while the female is cocooned in sheets, and he's also the one laid bare to physical aging distress. There is cutesy 'daring' dishing among the girls, hysterical second guessing by the principal, and romantic candlelit dinners paired with more offbeat dining engagements. Meyers has a template and she's sticking to it.