It Stains the Sands Red 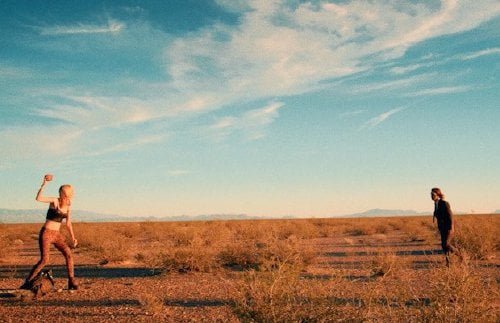 Nick (Merwin Mondesir) and Molly (Brittany Allen) are stranded in the desolate Nevada desert, their Porsche stuck in the sand. A lone figure in the distance staggers toward them and, as it gets closer, we know something is not right. The zombie traps them in the car and, when Nick tries to retrieve his dropped cell phone…. Molly is left to her own wiles to elude the relentless creature in “It Stains the Sands Red.”

As Las Vegas is overtaken by a zombie apocalypse, stripper Molly (Brittany Allen, "Extraterrestrial") races into Nevada's Valley of Fire with her boyfriend Nick (Merwin Mondesir, "Grave Encounters"), planning to meet up with his friend Jimmy (Michael Filipowich) at a remote air strip. Molly, feeling the worse for wear from the night before, asks Nick to pull over, but when they try to rehit the road, his rear wheels spin in the sand. On the horizon appears a shuffling man in a business suit (Juan Riedinger, TV's 'Narcos') who will be Molly's almost constant companion to her destination in "It Stains the Sands Red." Winner of the 2016 Midnight Extreme at the Sitges International Fantastic Film Festival, the latest from cowriter (with his 'Vicious Brother' Stuart Ortiz)/editor/director Colin Minihan ("Extraterrestrial") rarely goes where one expects, switching tone several times throughout. What begins as typical zombie gore takes a comedic turn, albeit one in which flesh-eating threats still loom, before becoming downright moving. By the time it's over, we realize that we've not only just seen one of the more unusual zombie films to come down the pike, but a redemptive character study. And just after Casey Affleck managed to create a sympathetic character while acting beneath a sheet in "A Ghost Story," we now have Riedinger developing a soul without ever shedding his zombie characteristics. The heavily made up, bleached blonde, fur jacket and leopard skin leggings wearing, coke sniffing, vodka swilling Molly does not immediately impress us as the finest of upstanding citizens and we do not yet even know that which would trouble us most. But Allen instills her character with an irreverent pluck we come to admire as she sets off on foot across the desert. Settling in for the night, her strike of a match reveals that the business suit attired walking dead who tackled down Nick back on the highway has followed her (Clayton Moore's cinematography delineates light and shadow, as well as wide open versus cramped space, to great effect). Daylight finds Molly struggling, but she attempts to solve her problem, first by attempting to distract the zombie with a game of fetch. She tries ridicule, her insults leading her to name the dead man Smalls, then pleading, then hiding, the latter allowing Minihan an opportunity to build tension. They will both face a sandstorm and a couple of vicious ex cons and something kind of miraculous happens. Molly gets to that airstrip and it is due to Smalls in more way than one, but she doesn't board Jimmy's plane. Her physical journey has sent her on one of a different kind, one which brings her right back to the city she had fled. There are a few negatives. Characters follow the horror genre copout of making stupid decisions in order to move the plot forward and there are some spatial assumptions made between Molly and Smalls that don't stand up to scrutiny. The movie often feels stupid and ingenious at the same time. Thankfully, the latter wins out overall, Minihan's flawed heroine becoming a real one, Smalls at turns terrifying, funny and sad. "It Stains the Sands Red" is destined to appear on best zombie movie lists for years to come. Grade:

Let me make something clear, I am not the horror movie fan in our family. That job goes to Laura. So, when I found out that I, too, had to watch “It Stains the Sands Red,” it was without a great deal of enthusiasm. That said, despite its story faults, this is a horror tale (who does not like zombies these days?), survival cautionary, road trip saga and very dark comedy. Brittany Allen gives a one-human performance whose costar (Juan Riedinger) staggers, growls and relentlessly pursues his next lunch – Molly. When the chase begins, Molly, stocked up on water, booze, cigarettes and drugs, easily evades the zombie, who she dubs “Small Dick” or “Smalls” for short. But, humans need to rest and zombies do not, and the chase begins, with her supplies steadily dwindling. I will leave the story’s details aside to let the horror fans enjoy it unsullied by my comments. A horror movie fan/critic is more qualified to analyze this post-apocalyptic world of zombies. I just had a great deal of fun and “It Stains the Sands Red” joins the pantheon of zombie movies with a heart.