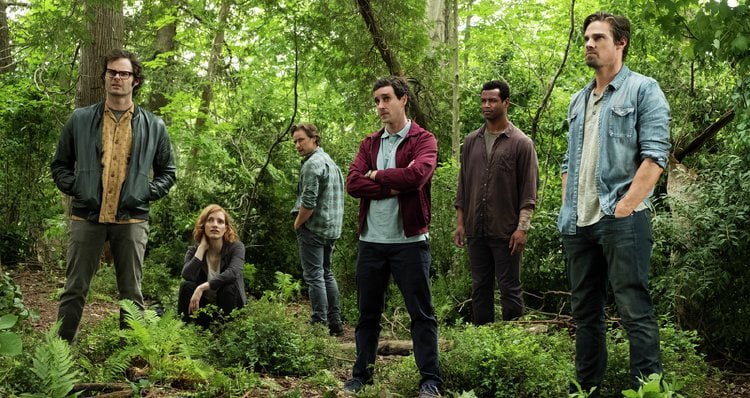 In Derry, Maine, a group of six boys and a girl dubbing themselves the Losers Club overcame the horror that arises every twenty-seven years to steal its children, Pennywise the clown (Bill Skarsgård). They all left but Mike (Isaiah Mustafa, Chosen Jacobs). Now an adult, Mike witnesses the cycle beginning again and calls his old friends home to face their fears and wipe out Pennywise for once and for all in "It: Chapter Two."

At almost three hours running time, one would hope that "Chapter Two" didn't spend a lot of time repeating itself. Unfortunately, the film is not only almost beat for beat repeat of the first but features so many flashbacks one would think it expects to draw a whole new audience who hadn't seen the first movie. It also has double the cast, with such A listers as Jessica Chastain, James McAvoy and Bill Hader picking up from the teenaged Bill (Jaeden Martell), Beverly (Sophia Lillis) and Richie (Finn Wolfhard). Yet we also get an adult version of bully Henry Bowers (Teach Grant) for little other reason than to stand in for the far more effective Pennywise. "Chapter Two" is marginally better than the first film mainly due to a couple of genuinely creepy set pieces, the horrific gay bashing episode which signals the clown's return and the comically icky hallucinations suffered by the reunited Losers at a Chinese restaurant, but the film suffers from serious bloat, most notably during its over extended climactic finale. At least returning screenwriter Gary Dauberman sets up a running gag about Bill's inability to end any of his books well, a charge that could be leveled at King once he passed his late 70's golden age which ended with 'The Stand,' and whose source material is, frankly, one of these films' biggest problems.

Returning director Andy Muschietti cycles through two long set pieces which touch on each of the Losers separately. First, he reestablishes them as adults, all, with the exception of Mike, unusually successful (Bill's a famous author and screenwriter, Richie a popular standup comic, Eddie an insurance risk analyst, etc.) and all still dealing with their childhood traumas. Beverly, for example, has traded her abusive dad for a violent and controlling husband while Bill's actress wife (Jess Weixler) looks a lot like her. None of them really remember what happened 27 years ago, each having to be prodded to remember just who 'Mike' is when he calls despite some pretty visceral reactions to hearing his voice - Richie vomits, Eddie (James Ransone, Jack Dylan Grazer) crashes his car and poor Stanley (Andy Bean, Wyatt Oleff) is so terrified he commits suicide rather than honor the childhood pact he alone seems to remember.

The group falls right back into their old camaraderie when they meet up in Derry, at least until an odd series of one word paper fortunes relays Stanley's fate. An assemblage of random horrific creatures crawl from their cookies, giving their waitress an eyeful when she arrives to see them reacting violently to things which are not there. Then they split up again, each tasked with finding their childhood talisman as part of the ridiculous ritual to rid themselves of 'It' Mike claims to have found in Native American lore of the 18th century. Particularly noteworthy is Bev's retrieval of the love letter from Ben (Jay Ryan, Jeremy Ray Taylor) which she still believes was written by Bill. The film's most effective scene is masterfully edited, Joan Gregson's extraordinary timing making for a very unsettling Mrs. Kersh. Richie faces off against the town's Paul Bunyan statue while Eddie faces the horrors inflicted by his mother.

Chapter Two is darker than the first, Bill's attempt to deal with the guilt of losing his little brother by saving another ending in a brutal bit of bloodshed. Yet there are really only a couple of scary jolts, too many scary CGI puppets repeating themselves, too many effects beholden to Carpenter's "The Thing." McAvoy feels miscast here, perhaps a first for the actor. Chastain, Ransone and Hader do a great job updating their childhood counterparts, but Mustafa's Mike is too much the outsider, a tour guide evoking none of the sympathy Jacobs brought to the role. Skarsgård is creepier the second time around, relying less on vocal tics. There is a trio of interesting cameos, French Canadian director Xavier Dolan playing Pennywise's gay victim, Peter Bogdanovich playing himself and Stephen King popping up as an exploitative antique shop owner.