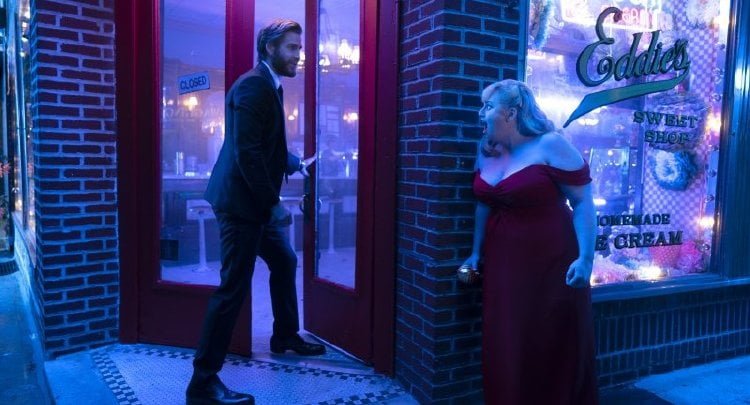 While thoroughly transported watching “Pretty Woman,” young Natalie (Rebel Wilson) was hauled back to earth by her mother (‘AbFab’s’ Jennifer Saunders), telling her it is a fantasy and that ‘they never make movies about girls like us.’ As an adult, Natalie is an overlooked architect who tries to do the same with her assistant Whitney (Betty Gilpin), listing all the reasons she hates romantic comedies. As if to support her claims, a subway come-on turns into a mugging, but the bonk on the head Natalie endures jolts her into a parallel existence where the American client (Liam Hemsworth) who’d barely noticed her is now a madly in love Australian in “Isn’t It Romantic.”

No, the title doesn’t have a question mark at its end, a minor annoyance for such a charming film. Writers Erin Cardillo and “How To Be Single’s” Dana Fox and Katie Silberman have fashioned a high concept romantic comedy that replaces the naive optimist of “Enchanted” in real world New York City with a cynic plunked into its glossiest Hollywood version. The film also mirrors Amy Schumer’s “I Feel Pretty,” another ‘hit on the head’ fantasy that gives its protagonist a delusional boost of self confidence which ends up becoming the real thing, just like Natalie’s eyes are opened to the romantic cliche that has been staring her in the face all along. Under the direction of “The Final Girls’” Todd Strauss-Schulson, Wilson bonds with her most appealing role to date, positively shining in witty song and dance routines. Natalie begins her day clambering out of the cramped sleeping loft of a realistically small New York City apartment. Her neighbor Donny (Brandon Scott Jones) slams the door in her face, her coworkers take advantage of her and she lacks the confidence to make her presentation in ‘the big meeting’ where client Blake (Hemsworth) asks her for coffee. Whitney’s a friend, but even she takes advantage of her boss by watching romcoms at work. Only Natalie’s coworker Josh (Adam Devine) is truly supportive and it is clear to us if not to her that he has feelings for her. When she comes to from that mugging, everything has changed. The hospital had to toss her clothing, so give her new ones that make her look like she’s just stepped out of “Breakfast at Tiffany’s.” Flowers abound on the streets of New York which now smells like lavender. And when Natalie steps into the street she’s plowed into by Blake’s stretch limo. He’s overcome, finding her ‘beguiling’ insisting on taking her home and leaving her with his phone number written on rose petals. Old grungy neighborhood shops are now all bakeries, flower and bridal shops, birds fly in heart-shaped formations in the sky, Natalie’s apartment is bigger and more beautiful and Donny is now her gay best friend. She’s respected in the office except for Whitney, who has morphed into the classic evil female coworker. After Natalie’s swept off her feet by Blake, while she walks in the park with Josh he rushes to perform the Heimlich on a choking woman who turns out to be stunning ‘yoga ambassador’ Isabella (Priyanka Chopra, TV’s ‘Quantico’). Isabella becomes as infatuated with Josh as Blake is with Natalie, causing her to reconsider everything. “Isn’t It Romantic” deliciously twists romcom cliches into self-referential laughs, from every swear coming out of Natalie’s mouth ‘bleeped’ by some natural onscreen noise to her frustration at her sex ‘scenes’ allows resetting just before the actual sex. There’s a full scale song and dance number with Natalie supported by bystanders in Central Park and when she finally succumbs to Josh’s beloved karaoke performing Whitney Houston’s ‘I Wanna Dance With Somebody’, she’s hip enough to what’s going on to embrace the accompanying backup dancers and professional choreography. Wilson is lovely, funny and real and her pairing with Devine is pitch perfect. Chopra exhibits fine comedic chops. Hunky Hemsworth is distracted in the real world, charmingly vacant (until he isn’t) in fantasyland. Strauss-Schulson keeps things zipping along at a lively pace, his film coming in at a just right 88 minutes. Grade: