I’ll See You in My Dreams 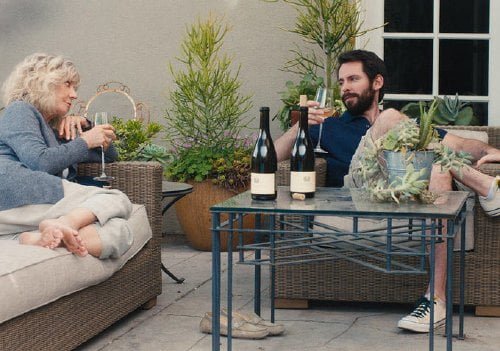 Carol Peterson (Blythe Danner) lost her husband, Bill, in a plane crash 20 years ago. Since then, her companions are her aging dog, Hazel, and friends – Sally (Rhea Perlman), Georgina (June Squibb) and Rona (Mary Kay Place). When she loses Hazel, she makes the decision to get back into the dating game in “I’ll See You in My Dreams.”

Widowed for twenty years, Carol Petersen (Blythe Danner, "Meet the Parents") is content with her routine. Each morning she reads the paper with her dog Hazel at her feet. She has a weekly bridge game with three friends at the Royal Oaks senior home, yet resists their entreaties to move in. Then two events shake up everything and Carol finds herself opening to new experiences in "I'll See You in My Dreams." Cowriter (with Marc Basch)/director Brett Haley had only made a micro-budgeted movie in his home state of Florida before embarking on this Kickstarter seeded, L.A. shoot with name actors. Here's a filmmaker with a real talent for creating organic characters in natural surroundings. The Royal Oaks community (Haley shot in the real senior housing complex, using its denizens as extras), Carol's airy Studio City home, a local marina and neighborhood businesses are corralled by Haley as Carol's world. It is a delight to see Danner in a lead role, and her character study bubbles with a relatable, melancholy feistiness bolstered by strong support from Mary Kay Place (HBO's 'Big Love'), Rhea Perlman (TV's 'Cheers') and June Squibb ("Nebraska") as her thoroughly different group of friends, all of whom make more of their characters than each's individual defining trait. And while Sam Elliot ("Mask," "Hulk") proves perfect casting as Carol's love interest, the film's real secret weapon is Martin Starr (HBO's 'Silicon Valley') as the pool cleaner who strikes up an unexpectedly empathetic friendship with his client. After returning home from the heart breaking task of having to put her old dog, Hazel, down, Carol is shocked to see a large black rat in her living room. When an exterminator is unable to locate it, Carol decides to sleep outside on her patio and it is here that Lloyd (Starr) finds her. After making an unsuccessful rodent sweep, he's convinced to indulge in Carol's customary Chardonnay and the two find themselves falling into easy conversation. Carol then gets a preview of Royal Oaks newest single at the drug store when Bill (Elliott) hits and runs with a flirtatious compliment. Her friends Sally (Perlman), Ro (Place) and Georgie (Squibb) are all aflutter when they hear, but Carol declares herself past all that. Nonetheless after Sally convinces her to try some dispiriting speed dating ('Barney Miller's Max Gail is one of her match-ups), Carol quickly accepts Bill's offer of lunch when she runs into him in the parking lot. I hate the type of film that mistakes elders acting 'inappropriately' young for comedy and Haley proves he has what it takes by making a scene in which the four friends indulge in Sally's medical marijuana vapor quite genuine, with an amusing munchies 'crime spree' followup that the filmmaker reins in from veering over that twee line. His actresses create such a believable group of friends in the attractive independent, the baudy cheerleader, the nosey gossip and the naive traditionalist that of course they'd be in all for one and one for all in their daring adventure. His writing imparts information off handedly, repeated answering machine messages from Carol's daughter Kath (Malin Akerman, "Watchmen") wanting to confirm a visit, denoting just how upended Carol's life's become since Bill entered the picture. And when Carol and Lloyd discover a shared musical past it leads to the film's central, anchoring scene when Carol wows a karaoke crowd with 'Cry Me a River' at one of Lloyd's hangouts. Haley's film doesn't follow the obvious rom-com route, instead reaching for something deeper. Through his character of Carol, the filmmaker illustrates how inviting change into our lives may be scary and even hurtful, but also enriching. That may sound cliched but Haley and his wonderful ensemble's approach is anything but. "I'll See You in My Dreams" is a small scale marvel. Grade:

I had a ho-hum attitude going in to “I’ll See You in My Dreams” and was not prepared for this little gem of a film. Blythe Danner is outstanding as Carol Peterson, a woman whose longtime routines take a new turn following her latest loss. Sally convinces her to go speed dating and Carol meets all manner of guys, none of whom she finds attractive. But, a chance encounter with a handsome man, coincidentally named Bill (Sam Elliott), does end up in a date - then another - and sparks fly. Meanwhile, when a rat walks through her home, Carol freaks out and sleeps on the terrace by her pool. Pool guy, Lloyd (Martin Starr), wakes her up and she enlists him to find the rodent. A friendship develops and they begin to hang out together. “You’re a good drinking buddy” he tells her and invites Carol to karaoke night at a local bar, where she proves to have a great set is pipes singing “Cry Me a River.”. Theirs is a sweet, platonic friendship and, like her romance with Bill, is grounded and believable. As is her friendship with the girls – in one scene, they decide to hit the medicinal marijuana and get a bad case of the munchies, to hilarious end. This may be an ensemble film, but Blythe Danner is first among equals. Carol is a very complex and sympathetic character and Danner imbues a full range of emotions and commands the screen. (When she loses her beloved Hazel, it a true tear jerk moment.) There is not a single miss with the sizable supporting cast either. Sam Elliott, with his craggy handsomeness and basso voice, is perfect as the suitor for Carol’s affection. The rest of the cast create believable characters and are given marvelous and funny dialog. Director Brett Haley, with co-scripter Marc Basch, creates a thoughtful, moving story of life after 60. Carol thought her 20 year routine would go on until the end but life can be full of surprises, she learns. It is nice to see films about older people that do not cut cute, though “I’ll See You in My Dreams” does have some of those moments. Here, the cute works as a part of the overall story but does not, by any means, dominate it.