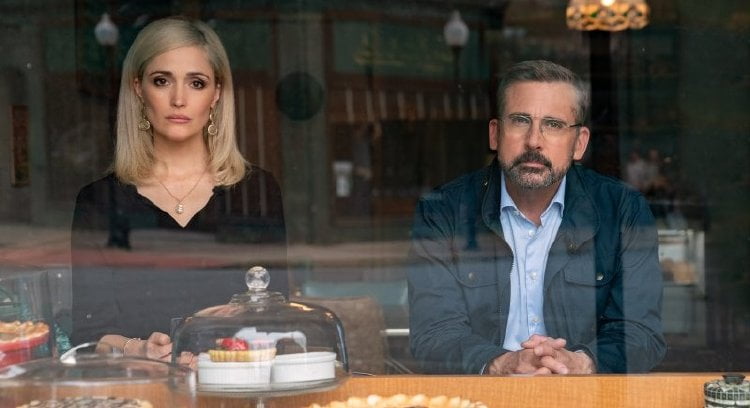 Mixing the high stakes, small town politics of “Welcome to Mooseport” with the farmland morals (and sucker punch twist) of Gus van Sant’s 2012 “Promised Land,” writer/director Jon Stewart’s ("Rosewater") second film proves an enjoyable if clichéd comedy whose strengths lie with its pro cast and convincing locations (Atlanta stands in admirably for the more northern state).  But one expects a sharper bite from the late night talk show host whose aim here is focused on the liberal establishment.  “Irresistible” is just too been-there-done-that to have much relevance.

If at first Gary’s bugaboo is too much technology, he’s spooked by the corded princess phone automatically answered by the bartender at Deerloken’s Hoffbrau.   His liberal passive aggressiveness is demonstrated by his outward protestations against the services he so obviously expects, griping as he hauls his luggage to his upstairs lodgings.  His elite condescension is evident in his pandering order of a burger and Budweiser in an establishment he will learn is known for its German food and beers.

Gary’s out of his depths, too, at Hastings’ farm, where he tries to direct cows as a backdrop for Jack’s campaign ad.  When he sees a billboard advertisement for Braun that features a semicolon, he knows Faith is in town.  She bets him $20 that her fear mongering will work better than his attempts to shame.  His real education, though, will come when he flies Jack to an East Coast fundraiser where the Deerloken candidate will point out the absurdity of being unable to get a response to his town’s problems until he rubs shoulders with rich New Yorkers.  Zimmer’s embrace of the sentiment will come back to haunt him.

Steward’s old Daily Show correspondent Carell gives us the uptight flappability we’d expect while Byrne continues to prove herself one of the best comedic actresses out there with her uninterested disdain.  Cooper is the picture of down home decency.  Mackenzie Davis plays Jack’s fresh-faced daughter Diana, who tries to guide Gary away from embarrassment.  Supporting character flavor is provided by Will Sasso, Topher Grace and Natasha Lyonne, Debra Messing memorable with an early bit of idiocy.

Stewart’s representation of the right is a taken-for-granted compendium of outright lies and chicanery while his portrait of the liberal strategist as a naïvely arrogant bumbler is a little too soft.  But every once in a while, he lands a real zinger (‘Paid for by Citizens for Religiously Based Compassionate Empathy’).  Still, this one’s past its expiration date, a disappointing distraction.

8 November 2016, the day after the election and DNC campaign strategist Gary Zimmer has to find a new candidate to back. He comes across a video of a town hall meeting in the tiny town of Deerlaken, Wisconsin and one man stands out: Col Jack Hastings (Chris Cooper). Gary sees the retired military man as his ticket back into the politics game in “Irresistible.”

As I watched this second work written and directed by comedian Jon Stewart (his first was “Rosewater (2014)”), what came to mind is a cross between “The Candidate (1972)” and “Doc Hollywood (1991).” And, the filmmaker maintains this combo until almost the end of “Irresistible” when he throws a curve ball I simply did not expect. And, I will leave it at that.

The story opens with Gary and his ruthless Republican opponent, Faith Brewster (Rose Byrne), parting ways, him the loser and her the big winner. When Gary sees the colonel’s video, he is impressed with his straight talking, no nonsense way of thinking and makes a beeline to Deerlaken and his new candidate for mayor of the town.

It takes some persuasion, but Col. Jack, with the advice of his daughter, Diana (McKenzie Davis), decides to throw his hat into the ring, with one condition. Farm-owner Jack does not want to deal with the day-to-day campaign. That, he says, is under Gary’s total control. Of course, the consummate campaigner gladly jumps to the task. He also succumbs to the small town charm – and Diana.

Everything goes well until his nemesis Faith Brewster rides into town and brings with her the power and money of the RNC to bolster the chances for the incumbent, Mayor Billy Braun (Brent Sexton). Gloves come off and the two strategists go toe-to-toe. That is about it as this timely comedy tells its story of political life in small-town Midwestern America.

Steve Carrell is the focal point for “Irresistible” and fills the bill with his oft-clueless charm. But the rest of the talented cast all give depth to their varied characters making Carrell first among equals. Rose Byrne’s Faith Brewster is mainly a cameo role but one that she gives a distinctive edge to her killer shark strategist.

The filmmakers in front of and behind the camera create a solid, funny, topical story that embraces the sense and sensibility of the Midwesterner and pokes fun at the political machines – both Republican and Democrat – that strives to control the hearts and minds of the American people. And, it makes you both laugh and think.