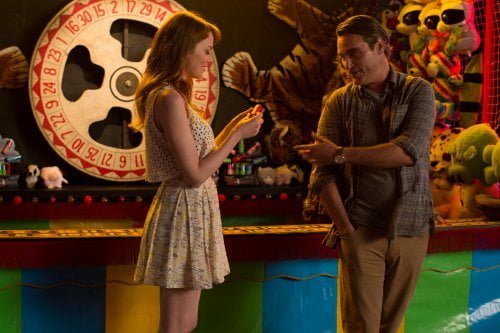 The staff and student body of Newport, R.I.'s Braylin College are all abuzz over the arrival of notorious philosopher Abe Lucas (Joaquin Phoenix) for their summer session, but Abe's finding it difficult to care about anything at all. Married Science professor Rita Richards (Parker Posey) makes no bones about her romantic designs on him while student Jill Pollard (Emma Stone) assures her boyfriend Roy (Jamie Blackley, "If I Stay") she's only aroused by Abe's ideas. Jill will be with Abe when he gets the big idea that rejuvenates him, and, unsuspecting, believes he is reacting to her influence. When she uncovers the truth, Jill's horrified to learn her philosophy professor is actually an "Irrational Man."

From 1969 up through the late '80's writer/director Woody Allen could do no wrong, one great film following another. The 90's were still good years, if not as consistently strong, until 1998 saw his first big misstep with "Celebrity." Things have been up and down ever since, lesser films outweighing the stronger ones. Maybe it's the lack of long term muses like Diane Keaton and Mia Farrow. Now Allen seems to flirt with short term flings like Scarlett Johannson in "Match Point" and "Scoop." Emma Stone has the misfortune of garnering Woody's gaze during a very low ebb in the auteur's inspiration. Last year's "Magic in the Moonlight" was pleasant enough piffle, but his latest, repetitive in and of itself, finds the director spinning his wheels, rehashing themes in a stilted screenplay which the director fails to enliven via his actors. Parker Posey is the only member of the cast who gives us anything like a good time in her unabashed quest to be rescued from a dreary marriage. Lucas thrills his students with his takes on Kant before proclaiming that much of philosophy is verbal masturbation. After he praises the reasoning in one of Jill's papers, she's floating on air, talking about Lucas non-stop when she's not spending time with him. At home, her professor parents (Betsy Aidem, "Margaret" and Ethan Phillips, "Inside Llewyn Davis") note that he writes stylishly but his substance doesn't stand up to scrutiny. Meanwhile Rita's finding the way to Abe's heart is through a bottle of single malt. Roy's not happy when Jill invites Abe along to a student party to shake him out of his brooding. When a friend of the host, April (Sophie von Haselberg), finds her father's revolver and another student claims ignorance of the term Russian Roulette, Abe shakes things up indeed with an instantaneous demonstration. Jill's both terrified and thrilled. But it is an innocent outing to a local diner that really quakes Abe's soul when they overhear the woman in the next booth (Susan Pourfar, "King of the Corner") describing her ill-fated custody battle in the hands of a corrupt judge, Thomas Spangler (Tom Kemp, "Shutter Island," "Blue Jasmine"). Allen has a penchant for threading philosophical themes through many of his films and he's looked at fate and chance in films like "Cassandra's Dream" and "Match Point." Here he gets literal with an amusement park's game of chance which reverberates in his climax. The film's so heavy handed it has no room to breath, his actors verbalizing lines from his script (in incessant voice over as well) that never come to life (a dinner scene where Jill and Abe discuss a local case with her parents is painful). Allen scores most of his film to the Ramsey Lewis Trio's 'The 'In' Crowd,' which is about the only sign that his intent is comedic. The production at least looks nice, Salve Regina University standing in for the fictional Braylin College among other Rhode Island locations. Grade: