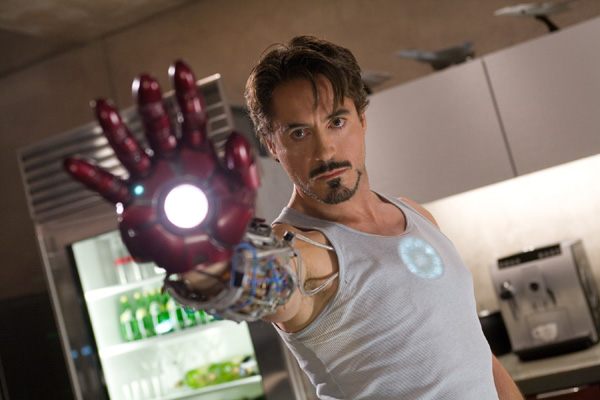 Genius billionaire inventor Tony Stark (Robert Downey Jr., "Zodiac," "Charlie Bartlett"), whose company is America's top weapons contractor, is badly injured when he's kidnapped by insurgents who order him to build a super-weapon for their leader Raza (Faran Tahir, TV's '24,' "Charlie Wilson's War"). Instead, Stark fools them, using the opportunity to build a suit of armor that will preserve his life, allow him to escape and use technology for the global good as a new super hero, "Iron Man."

Advance buzz on "Iron Man" has been so enthusiastic I was expecting to have my socks knocked off, but unlike, say, "Spider-Man's" eye-popping effects or the dark artistry of Christopher Nolan's "Batman Begins," "Iron Man" offers nothing new, slavishly conforming to the standard super hero outline (rich guy with dead parents has dad's former partner as mentor exec, undergoes crisis of conscience and forms new persona, doesn't recognize love of his life right in front of him, gets help from sidekick when the going gets tough, discovers close insider has evil intent). What it does have is the uniquely delicious casting of Robert Downey Jr., as unlikely a candidate for super hero as I could imagine, putting the movie over by sheer force of self mocking charisma. We're introduced to Stark drinking a scotch in an armored vehicle in Afghanistan surrounded by awe-struck soldiers. 'Is it true you went 12 for 12 with a year's worth of Maxim cover models?' one asks. Seconds later the vehicle in front of them explodes and Stark is suddenly on his own, then injured and out cold. Director Jon Favreau ("Elf," "Zathura: A Space Adventure"), who cameos as one of Stark's bodyguards, then rewinds his story to give us a little more of the pre-crisis Stark, an inventive genius and womanizer who lives in a state of the art estate jutting out from a Malibu cliff. Ever loyal assistant Pepper Potts (Gwyneth Paltrow, "Shallow Hal," "Proof") shoos Stark's most recent bedmate, Vanity Fair writer Christine Everhart (Leslie Bibb, "Talladega Nights: The Ballad of Ricky Bobby"), out with the trash, then makes her boss anxious with personal plans, her birthday, for which she's efficiently already gifted herself. Tony's then off to his fate, a demonstration of the Jericho missile he pulls off like a war-mongering symphony conductor. Once captured, though, he finds himself being kept alive by a device plugged into his chest by Yinsen (Shaun Toub, "The Kite Runner"), a scientist who will help Tony with his deception. It is in this section that the script by "Children of Men" scribes Mark Fergus and Hawk Ostby, is particularly weak as the men, who are being constantly monitored via vidcamera (Why not just guarded? Why by non-English speakers?), are clearly not recreating a Jericho missile. Iron Man the beta version escapes with all due gunfire and explosions to land, as the first of the film's continuing punchline, in a heap. Tony returns to the States, demands a cheeseburger and immediately calls a press conference to announce Stark Industry is getting out of the weapons business. The film is most enjoyable as Tony goes through production tests of his new, upgraded Iron Man, all hot rod red with a heart like a whitewall. The surprising chemistry between Downey Jr. and Paltrow sizzles as she performs something like a heart transplant on her boss before going off to download the data that reveals the not surprising truth behind Tony's abduction. The film's climatic battle is like a mashup between "Robocop" and "The Transformers" with a cheeky side wink to Jim Rhodes's (Terrence Howard, "Hustle & Flow") potential as a sidekick suitup in the sequel. Favreau goes out on a really high note, though, with a final line of dialogue that entirely bucks super hero convention, opening the door for a far more interesting followup. Downey Jr. is such a kick in this movie it is not implausible to note him as a potential Oscar nominee in the Johnny Depp, "Pirates of the Caribbean" slot and after a series of depressing roles from "Sylvia" to "Running with Scissors," Paltrow has a refreshing makeover as the loyal and impeccably groomed Potts. In keeping with the quirky casting is Terrence Howard of the soft and sultry voice as a military man in the know and "The New Adventures of Old Christine's" Clark Gregg wringing laughs out of respectful distance as SHIELD agent Coulson. Listen also for the voice of Paul Bettany ("A Beautiful Mind," "The Da Vinci Code") as Jarvis, Tony's computer's simulated voice and pseudo butler. Jeff Bridges, looking like a cross between Daddy Warbucks and Kris Kristofferson, is depressingly routine, however, as Tony's top exec Obadiah Stane. The film has the requisite look and effects, from flying sequences to robo-battle, all well executed with solid sound design. Tony's toys include several high priced sports cars (which he endangers in another bit of not quite disbelief suspending screenwriting) and a fire-extinguishing 'bot with loads of personality. Like the "Wizard of Oz's" metal man, "Iron Man" is on a quest to find his heart. With the character established and supporting players (Paltrow, Howard, Gregg) ready for their closeups, the sequel needs to be as inventively written as the first film was cast.