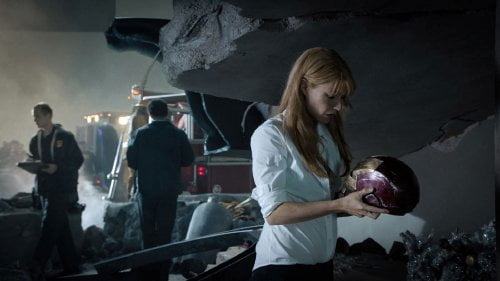 In 1999, Tony Stark (Robert Downey Jr.) attended a conference and had a one night stand with brilliant biologist Maya Hansen (Rebecca Hall, "The Town"), who was about to crack the code to reprogramming human DNA. He also met Aldrich Killian (Guy Pearce, "Lawless"), a strange, disabled man who pitched a business deal in an elevator. Stark agreed to meet him on the building's rooftop but didn't show. Now years later, dealing with the psychological aftermath of events in NYC, Tony spends his time tinkering with new prototypes while Pepper Potts (Gwyneth Paltrow) turns down a much changed Aldrich Killian a second time and the rejections will haunt them with a vengeance in "Iron Man 3."

Taking over the reins from Jon Favreau (who still appears here as Happy Hogan, newly promoted to Stark Enterprise's Security Chief), cowriter (with Drew Pearce)/director Shane Black ("Kiss Kiss Bang Bang) delivers the best of the series so far. In fact, "Iron Man 3" is the best of the Marvel films with its complex story, exciting action, great cast and special effects. Gwyneth Paltrow just owns the role of Pepper Potts, who graduates here to Iron Woman status. Happy is very suspicious of Aldrich's intentions and the aggressive behavior of his employee Savin (James Badge Dale, TV's 'Rubicon,' "The Grey"), so he tails the latter to Graumann's Chinese Theater and witnesses an glowing man who explodes with such great force, Happy is left in a coma. Stark begins to work with his computer, Jarvis (voice of Paul Bettany), to investigate the crime scene but before he's able to follow his lead, The Mandarin (Ben Kingsley, "Sexy Beast," "Hugo") hijacks U.S. broadcasting and claims the crime is just the beginning. Stark publicly threatens the terrorist only to see his entire compound wiped out and himself transported to Tennessee per Jarvis's preprogrammed flight plan. Meanwhile Pepper, not knowing Tony's status amidst all the destruction, goes on the road with Maya, who had arrived only moments before with a warning. The complex issue of scientific research vs. the military industrial complex has always been a theme in "Iron Man," but Black brings it to a whole new level of possibilities and moral choices which fuel multi-layered betrayals and deceptions. Stark is also put at a technological disadvantage, which, along with his current anxiety, allows the character to grow. He's now reliant on some ordinary Joes, including a young boy, Harley (Ty Simpkins, "Insidious"), who finds Stark and his powerless Iron Man in his garage (and who later suggests a possible connection to action from "The Avengers"). The story has also been set in the days leading up to Christmas, and Black continually utilizes the holiday in imaginative ways, not unlike "Die Hard." Special effects set pieces couldn't be better, from that horrifying Graumann's explosion to three dimensional computer imagery to the destruction of the Stark Compound and its underwater aftermath. The highlight involves a breach of Air Force One and a mid-air Iron Man rescue that trumps anything Superman's ever done. During the film's fiery climax set aboard a docked oil tanker, there is an image involving President Ellis (William Sadler, "Being Flynn") ripped right out of "The Silence of the Lambs," which I could swear the score briefly acknowledges. This whole thing wouldn't work nearly as well if not for the interplay between Downey Jr. and Paltrow and Downey Jr. and Bettany, whose vocal work as Jarvis tweaks every scene he's in. Kingsley hasn't been this entertaining since "Sexy Beast" in a role which, like that one, allows him to portray two very different sides of the same character. Pearce does much the same, first a desperate nerd in crazy wig and dental prosthetic, later slick and sexy business man. And, of course keep your eye out for the obligatory cameo from Marvel comic creator Stan Lee, this time as a Tennessee beauty pageant judge. With rare exceptions, movies adapted from comic books usually don't require a lot of thought. Shane Black's "Iron Man 3" is entertaining as hell on the surface, but leaves its audience with plenty to ponder after the fact. Stick around through the end credits - not only do the credits themselves offer homage to 1960's comic book adaptations, but the standard Marvel stinger, while not setting up future Avengers' story, is an amusing capper.