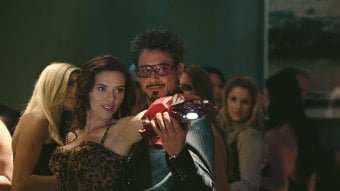 After outing himself as Iron Man, Tony Stark (Robert Downey Jr.) begins to proclaim himself the engineer of world peace to an adoring public. A Senate Armed Services Committee led by Senator Stern (Garry Shandling), however, feels Stark's alter ego could present a threat and demands he turn over the suit they say is a weapon. Stark refuses, embarrassing corporate rival Justin Hammer (Sam Rockwell, "Moon") by disproving his claims unfriendly countries are on the verge of their own versions with amusing video footage. But Stark's being watched in Moscow by Ivan Vanko (Mickey Rourke, "The Wrestler"), the son of the man who codesigned the suit's core with Stark's dad, and Stark's huge ego is about to be dealt a crushing blow in "Iron Man 2."

Director Jon Favreau and star Downey Jr. come back with a second helping that is surprisingly as satisfying as the first, if also boasting some of the same flaws and the 'more is better' approach of most super hero sequels. The surprisingly funny script from actor Justin Theroux gives Stark a new reason to reassess himself while also providing some terrific banter for Stark and Pepper's simmering sublimation. If Mickey Rourke's Russian prison tattoo covered villain isn't particularly charismatic, his enabler, Rockwell's Hammer, is worth rooting against and Scarlett Johansson gets to trot out some pretty hot moves as an undercover girl posing as Stark's new assistant Natalie Rushman. Theroux does stuff a little too much plot into the sequel, which begins to bog down at the one hour mark when the film has to busy itself with tying all its threads together, but it roars back to life in the final big showdown which is, arguably, more exciting than the first. Things kick into high gear with a live 'show' for Stark Expo that recalls the boxing ring theatricality of "Rocky IV" but we soon learn that Tony is keeping a secret - the core which is keeping him alive is poisoning his blood. When Pepper demands his time as he tries to update his design (the answer comes in a novel way as both a connection to father Howard, played by "Mad Men's" John Slattery, and as a puzzle), Tony promotes her to CEO of Stark, telling her 'she was always the one.' He meets his nemesis when he surprises all by taking the wheel of his Monaco Grand Prix entry. Vanko comes striding down the raceway like a gladiator cracking two charged whips and almost bests Iron Man. As Stark wrestles with his own confidence, best friend Lt. Col. James 'Rhodey' Rhodes (Don Cheadle replacing Terrance Howard, missed) wrestles with duty vs. friendship. Nick Fury (Samuel L. Jackson) shows up placing more pressure on Tony to join S.H.I.E.L.D. while Pepper, desperately trying to hold things together, is astonished when Hammer presents his new droid military at a military trade show. Favreau spares no attention to detail. Stark tosses virtual basketballs in his lab, worries in his vintage car, does spectacular damage to his high tech manse in a drunken birthday bash, one which ends with Iron Man evoking fear instead of pride. Johansson's action set pieces are so beautifully orchestrated you'll swear she's actually taking down men twice her size and the contrast between her permed auburn locks and the white tiles of a corporate lab give her the look of an animated comic Medusa. All returning cast members are top notch, Downey's brand of cool irony fitting this role to a tee. Paltrow's never been better than she is here either and Favreau himself provides comic support. Rourke has a good look down, but depends on a white cockatoo for personality (hey, been done before), but Rockwell's slick and superficial CEO shores him up - Rourke's more of a weapon himself than the actual villain. Cheadle seems to be having no fun at all filling Howard's shoes, at least until the big climax rolls around. "Iron Man 2" boasts a cast of characters that are fun to be around and that bodes well for the next one. Stay through the end credits for a hint of what's to come.