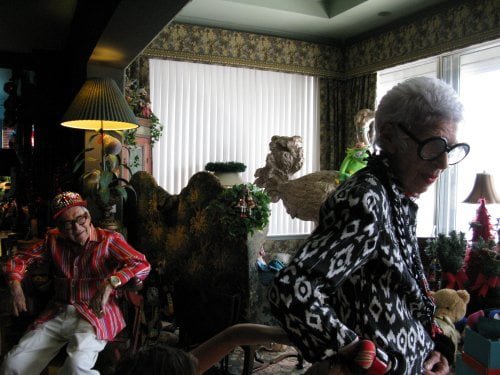 93-year old Iris Apfel has been an icon of fashion for decades. Her collection of couture costume jewelry has been on exhibition many times and her influence on young designer hopefuls continues to this day. The late Albert Maysles brings us the story of this remarkable, flamboyant lady known as “Iris.”

The eighty-eight year-old documentarian Albert Maysles ("Gimme Shelter," "Grey Gardens"), who died in March, takes on the ninety-three year old fashionista Iris Apfel, who shows no sign of slowing down in "Iris." Much like Elaine Stritch, who also wore the same signature owl eyeglasses, Iris Apfel is a New York City character, a grande dame of society, fashion and flea markets. Over a black screen, we hear clicking sounds like those made by insects only to have them revealed as the clacking of Iris's bracelets as she models a few ensembles for the camera. She'll pair an Ungaro jacket with 'Johnny Versace's pants and slip on canvas shoes of her own design for HSN or perhaps an Asian monk's robe, its hood remodeled into a collar with clunky bracelets picked up in Harlem. We hear of her beginnings, given a leg up on what would become her passion by her mother, a NYC boutique owner. Mrs. Loehmann of the famous discount chain (whom Iris describes as looking like Toulouse Lautrec) told her she had style and she ended up at Women's Wear Daily. After marrying her husband Carl, who celebrates his 100th birthday during filming, the couple formed a company doing restorations at museums and the White House. But it wasn't until 2005, when the Metropolitan Museum of Art asked to put a show together based on her collection, that Iris became a superstar at the age of eighty-seven. 'Iris Patel, Rare Bird of Fashion' would travel across the country. Maysles clearly enjoyed an intimate relationship with his subject, hanging out in her apartment, traveling along on a shopping expedition and witnessing her department store fashion makeovers. But the 80 minute film runs out of gas just as it hits the hour mark and ends on an odd note, Iris snippily stating she 'doesn't happen to like pretty.' She and her husband's business is ill defined within the film (were they interior designers?) and one could get the uncomfortable feeling Carl is exploited for some easy laughs, wearing whatever outlandish piece, like a bright red spike studded cap, catches his wife's fancy (does it speak to their devotion that she still has the pink satin wedge heels she wore at their wedding 66 1/2 years prior?) "Iris" is colorful and Apfel is clearly a natural born stylist, but Maysles seems content just capturing the surfaces here. No one challenges the woman who sets such a high standard for individuality of style as to why she hawks accessories to be sold in vast quantities on the Home Shopping Network. We only get an inkling of her interior thoughts as we see her choosing pieces for the Peabody Essex Museum in Salem, Massachusetts, the museum which offered to house her collection. Grade:

This is Albert Maysles second to last documentary (his last is the completed, though not released yet, “In Transit”). The man has been making documentaries (many with his long time collaborator and brother, David) since 1955 and created such docu classics as “Gimme Shelter (1970)” and “Grey Gardens (1975).” Maysles’s subject of observation, Iris, is, even in her 90s, a bundle of creative energy. She is not, she insists, a fashion designer but her life is “a combination of fashion, interior design and art.” Per the flashy though tastefully dressed maven, there are “no rules in fashion. If there were, I’d break them.” To say that Iris is a colorful character is an understatement. She treats each outfit she wears as unique, demanding that each have colors, sometimes lots of it, including her trademark over-sized costume jewelry. Some might think that Iris and husband Carl are hoarders, and they would be right. The couple does not just have rooms full of stuff they have collected for 75 years. They have three homes full of their collections. Maysles has a rich subject matter and tells the story of Iris Apfel’s remarkable career, her marriage to husband Carl, who celebrated his 100th birthday during the making of “Iris,” and her lasting influence on the fashion business.