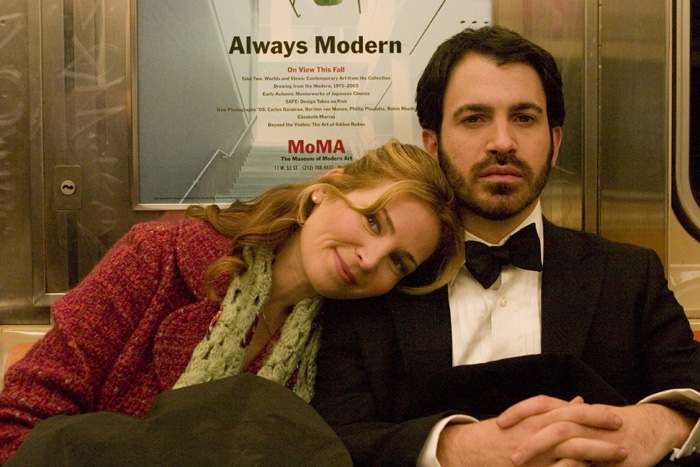 Ira Black (Chris Messina), after 12 years in therapy for his obsessing way, is fired by his shrink because he has made absolutely no progress. He decides to turn his life around by joining a local fitness center where he meets vivacious and carefree Abby (Jennifer Westfeldt), a young woman as sure of herself as he is not. After a very brief romance, they decide to get married, a decision that does not proceed as planned in “Ira & Abby.”

Sophomore director Robert Cary starts off well enough as the titular characters meet, fall in love and marry. Ira and Abby are the perfect example of how opposites attract. For Ira, there is the obstacle of his parents, Seymour (Robert Klein) and Arlene (Judith Light), both analysts (not therapists – analysts listen and therapists talk) who are responsible for their son’s life of angst and obsession. Abby has it a little easier with her own parents, Lynne (Frances Conroy) and Michael (Fred Willard), whose carefree demeanor has marked their daughter with a love for life. Things turn sour for the newly married couple when Ira learns Abby’s secret – she was married not once, but twice, before and he cannot cope with it. He soon files for the annulment of their marriage. It becomes a love found, love lost then found again story that wanders away from its focus on Ira and Abby and the baggage of their parents’ lives, Ira’s ex, Lea (Maddie Corman), and an ever-increasing cadre of psychiatrists intrudes into the film. I started out really liking “Ira & Abby” with his New York Jewish angst (smacking with the influence of Woody Allen) and her cheery lightheartedness. The latter is beautifully played out early in the film when, while riding the subway, the couple confronted with a gun-toting robber. Ira quakes with fear at the dangerous situation but Abby takes the bull by the horns and defuses the crisis, even getting the criminal to give back some of the money he takes. I laughed out loud at the clever, absurdist scene and I hoped for more such quirkiness. Alas, it was not to be. As Ira and Abby’s life goes through its ups and downs, their story is diluted as other characters enter the picture and shift the focus away from the couple. An illicit affair between Arlene and Michael takes up too much screen time and serves only to defuse the romantic comedy of “I&A.” Other subplots, like Ira going back to his ex-fiancée Lea, only serve to distract from what began as an amusing romance gone bad. In the end, there were too many characters vying for the viewers attention when it should have stayed centered on the title couple. The problem with “Ira & Abby” is Jennifer Westfeldt’s screenplay. The steady addition of more and more characters served to fragment what could have been a charming romantic comedy. Chris Messina plays only one note as the angst-riddled, unambitious Ira, a role that could have played more fully in another actor’s hands. Westfeldt is likable as the self-confident Abby but she is buried under the burden of so many other characters. The rest of the cast is filled with veteran thesps, like Klein and Willard, but they are relegated to caricature performances and lack any depth. Woody Allen made Manhattan Jewish anguish a thing of amusing delight and I wonder how “I&A” would have fared if a young Allen could have been cast in the role of Ira. Oh well, that is something I can only speculate and ponder.