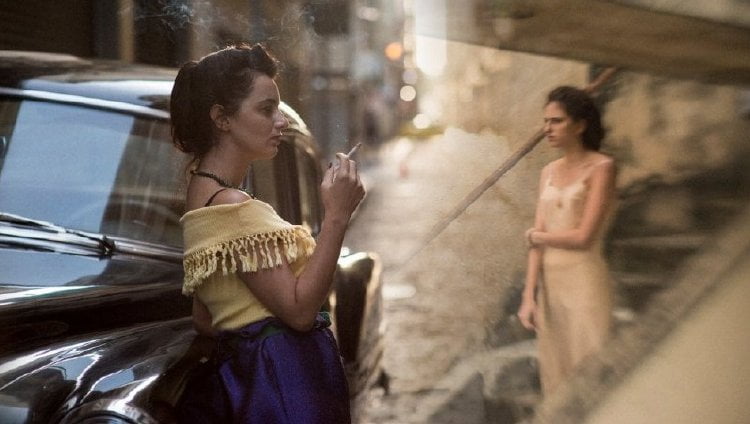 In 1950's Rio de Janeiro, 20 year old Guida (Julia Stockler) encourages her 18 year old sister Eurídice’s (Carol Duarte) dream of studying piano in Vienna while Euridice helps Guida sneak out of the house to be with her Greek sailor Iorgos (Nikolas Antunes), both pursuits dismissed or forbidden by their conservative working class father Manoel (António Fonseca). When Guida elopes to Greece, then returns single and pregnant, Manoel lies about Euridice’s whereabouts and banishes her from his house, condemning each to an “Invisible Life.”

Cowriter (with Murilo Hauser, Inés Bortagaray)/director Karim Aïnouz ("Madame Satã") begins his melodrama, Brazil’s submission for the International Film Oscar, with Guida calling for her sister Euridice, lost in a rainforest near the base of Sugarloaf Mountain. The scene adds nothing to the plot, but establishes the film’s theme, that of two separated sisters who search for each other throughout their adult lives.

You have to stay on your toes for the initial goings of Aïnouz’s film, adapted from the book 'The Invisible Life of Eurídice Gusmão,' as not only are Stockler and Duarte well matched as sisters, but the filmmaker often shuttles between their two stories by finding an event in Euridice’s life that parallels something we’ve just learned about in Guida’s. For example, after Guida leaves for Greece, that woman in a wedding gown being attended to in a bathroom by the raven haired Zélia (Maria Manoella), who could as easily be Greek as Brazilian, isn’t Guida, but Euridice, marrying a man, Antenor (Gregorio Duvivier), we are hearing about for the first time.

We never do find out why Euridice married Antenor, nor even how they met, but their drunken wedding night is less than romantic. The marriage consists of Antenor forcing himself on a wife distraught when he doesn’t pull out in time, pregnancy an obvious obstacle to her musical aspirations. Meanwhile Guida does give birth to a baby boy, but staggers out of the hospital leaving him behind to get back to work in the clubs she frequents.

The film follows these two women, whose letters to each other never arrive in their recipients’ hands, through their trials and tribulations. Euridice raises a daughter, buries her mother (Flávia Gusmão) and takes care of her widowed father, her triumphant eventual acceptance into a local music conservatory overshadowed by Antenor’s outrage. Guida becomes close to older prostitute Filomena (Bárbara Santos), who helps her raise the son, Feliciano (Hugo Cruz), she returns for and loves. A long saved for trip to Vienna to find her sister is derailed when she cannot get a passport for the boy without his father’s authorization. In an excruciating scene, the sisters cross paths in a restaurant during the Christmas season without ever seeing one another, while their children engage in play at a central fish tank.

There are other ironic near misses in this sprawling tale, one which brings us into the widowed Euridice’s old age. But as with Euridice’s inexplicable marriage, there are also gaps a little too wide to fully fill in. The great irony here is that one sister’s life is subsumed by her husband while the other’s is by a lack of one. The two actresses are both engaging, although the vivacious Stockler has the advantage of a more fully developed character. The production is serviceable, creating two distinct worlds within one city.