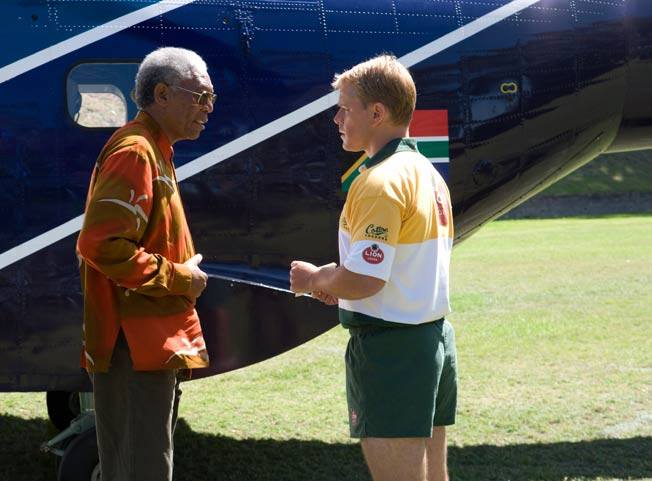 Newly elected president of South Africa Nelson Mandela (Morgan Freeman, "Million Dollar Baby") had a tough task at hand in uniting the white Afrikaners who upheld Apartheid and the Black natives they had suppressed. When black South Africans called for the dissolution of the Springbok rugby team, whose green and gold uniforms represented Apartheid and whose players only included one black man, Mandela surprised them by supporting the team and opened the eyes of its captain, Francois Pienaar (Matt Damon, "The Informant!"), with the inspirational words of a poem which had kept him going for thirty years in Robben Island Prison, "Invictus."

After dealing with racism on a neighborhood level with his last film, "Gran Torino," director Clint Eastwood ("Play Misty for Me," "Mystic River") takes on the subject on a grand, political scale while also offering a partial portrait of Nelson Mandela, a role Eastwood vet Morgan Freeman owns. While "Invictus" may not be Eastward's best film, it is a surprising crowd pleaser that will open U.S. eyes to the brutality of the game of rugby while shining a light on the extraordinary humanity and wisdom of Mandela. With "Invictus," Eastwood takes the 'inspirational sports film' to an entirely new level! Eastwood grounds his audience with a brief historical background that brings us through Mandela's release and a country on the verge of civil war. The film proper begins as Mandela first tackles racial divide in his own offices on his first day. His head of security, Jason Tshabalala (Tony Kgoroge, "Hotel Rwanda," "Skin") is beside himself when Etienne Feyder's (Julian Lewis Jones, "The Bank Job") team reports for duty - white special ops cops who guarded de Klerk and perhaps sent Black people to their deaths, but Mandela has signed their orders. When his Chief of Staff Brenda Mazibuko (Adjoa Andoh) advises that his support of the Springboks will cost him politically, Mandela advises back that forgiveness is liberating. But Mandela has another problem - even the Minister of Sport (Shakes Myeko) believes the Springboks have no chance of winning, let alone competing for, the World Cup. And so the President of South Africa invites the team's captain, Francois Pienaar, whose father (Patrick Lyster, "I Dreamed of Africa," "Slipstream") thinks Mandela's election is the beginning of the end for their country, to tea and discusses leadership and how to inspire people to be better than they think they can be. Pienaar is surprised by the man he meets and begins to respond to his council. When the team objects to a request that they hold coaching sessions for the townships while they're training for the Cup, Pienaar plunges in enthusiastically and lo', the black people begin to respond not only to their own Chester Williams (McNeil Hendricks), but to the white players on the team and television news crews take note. Screenwriter Anthony Peckham ("Don't Say a Word") adapts John Carlin's aptly titled novel "Playing the Enemy" in familiar fashion. There is nothing new about the arc of the story or its evenly timed punctuations of Mandela wisdom, but Eastwood is such a master that one cannot help but be sucked in. There isn't even any real friction to speak of after the initial dissent, just the tale of an underdog team pulling off the impossible. Rarely does it feel like we're being manipulated by Eastwood, and even when it does - two 'fakeout' scenes of imminent danger - it still works (the second one's a corker). Eastwood shows the before and after of Mandela's scheme with scenes of a needy child rejecting a Springboks jersey at a Church charity event and Mandela's biracial security team taking a break by playing rugby together. If films such as "Red Cliff" lay out battle plans for the viewer to see in action, "Invictus" illustrates Mandela's two-pronged approach to unity with words. 'If we take away their rugby, we lose them and are everything they feared we would be; Surprise them with compassion.' The team learns about the Black experience via those coaching trips and a surprise excursion to Robben Island. The action of "Invictus" is on the playing field where we see rugby players in shirts and shorts with no padding using the brute strength of an entire team in a scrum to gain possession of the ball and to tackle monstrous players like Jonah Lomu (Zak Feaunati) of the New Zealand All Blacks. We are told that 'Soccer is a gentleman's game played by hooligans - rugby is a hooligan's game played by gentlemen,' and Eastwood makes the case. With just a little white hair-streaking, Freeman suggests Mandela and he delivers several mini-speeches with varying motivation - frustration, certainty, guidance, warning. As the Springbok captain, Damon sports the musculature of an athlete (he trained with the real Chester Williams) and a passing South African accent. Kgoroge and Lewis Jones are matched in the trenches by Patrick Mofokeng and Matt Stern and the actors supply not only the film's second layer of racial unity but some comic relief as well.

Nelson Mandela (Morgan Freeman) arose from 27 years in prison to become the first black president of modern South Africa. The challenges he must face are many, including the hatred his people feel toward the apartheid-born national rugby team, the Springboks. Mandela, though, sees the team as the catalyst that will unite his country in “Invictus.” Clint Eastwood tells an inspiration political sports film that centers on Morgan Freeman as the iconic Nelson Mandela and his bid to unite his country behind their national rugby team. His work is cut out for him, as he has to convince the black majority of South Africa to stand behind the Springbok team in their contest for the 1995 World Cup. This is old-fashioned storytelling, something we are used to from Eastwood (“Gran Torino”), that briskly moves us through the recent history of Mandela and his country, from his imprisonment for 27 years under the apartheid government, to his joyous release from prison, to his election as president and the challenge he must face to unite South Africa. The story of the Springboks is given shorter shrift and does not have the texture of the Mandela-focused half of the story. However, the sports action is expertly handled. This is a Morgan Freeman vehicle and the rest of the cast, including Matt Damon as team captain Francois Pienaar, perform around the thespian. His solidly portrayed, sympathetic performance as Mandela will appeal to the Academy and other award givers. It is a fine perf in a good film.