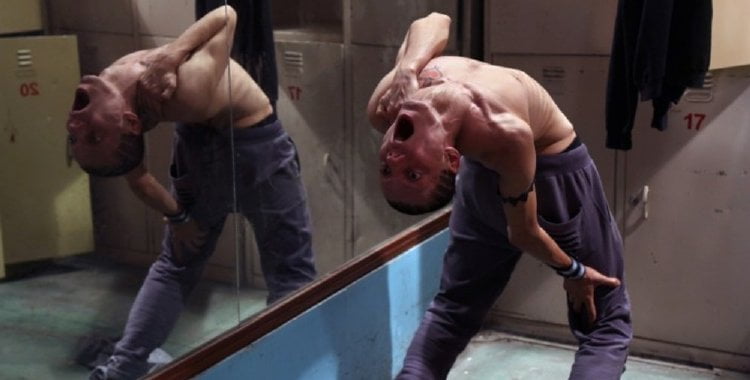 In a dystopian world that has been in darkness for three years, a sports team keeps sheltered in a fog bound stadium behind a barrier fearing disease, among other things, beyond it. Police accuse one of them, Ali (Abed Abest), of murdering his friend Saman and demand a reconstruction of the murder in "Invasion."

Cowriter (with Nasim Ahmadpour)/director Shahram Mokri combines a love of genre films with an experimental approach to time and complex single take action choreography, but his love of experimentation so obscures basic storytelling principles that he leaves us little to latch onto. Initially fascinating and technically impressive, "Invasion" quickly wears out its welcome with ideas too tenuous to cohere into anything meaningful. As this group of men sporting elaborate body tattoos and black mesh uniforms gather, Ali tells us he intends to admit to the murder, claiming he committed it alone. We learn Saman was considered 'weird' because he liked to cook and wore loud colors, but the real truth, apparently, is that he was a vampire whose demand for blood doubled. That would be because of his twin sister Negar (Elaheh Bakhshi), who arrives as the investigation starts up, baring bloody fangs at Ali and informing him that she was always present when Saman was, the two trading places within a large rolling suitcase within which one can project oneself to 'the other side.' The film loops in upon itself over and over, repeating some segments, moving forward and backward, until we are unsure if we are witnessing different points of view or flashbacks or fantastical reality (why, for example, does a live Saman pop up in the film's later goings?). Negar is demanding blood while Ali both plans to kill her and seemingly wishes to protect her. He desire to 'wear sunglasses' and go rock climbing indicate a yearning for the world before darkness, and, apparently, vampires. I'm sure there's political subtext here for anyone wishing to look. Mokri and his cinematographer Alireza Barazandeh follow Ali through circular corridors, locker rooms and stadium seating in an unbroken take and Milad Movahedi has composed a lush, effective score, but when both end on a closeup of that suitcase, "Invasion" evaporates like a vampire in the sun. Grade: