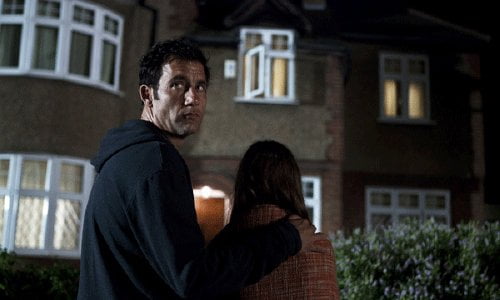 In Spain, young Juan (Izán Corchero) clambers out onto scaffolding to rescue his cat in the rain when a hooded apparition appears and slips into his bedroom window. In a London suburb, twelve year-old Mia (Ella Purnell, "Never Let Me Go") finds a story hidden in a tree and begins to write about, then see in the deep recesses of her bedroom closet, Hollowface. A horrifying validation for both of these children is that each has a parent who also can see these "Intruders."

Juan Carlos Fresnadillo burst onto the scene in 2001 with his inventive "Intacto," then trumped Danny Boyle's vampire tale with his sequel "28 Weeks Later," but if he's proven anything with his latest it's that no matter how much of a personal stamp a director can bring to a film, if the story doesn't work neither will the film. Tellingly, Fresnadillo didn't have a hand in writing this one (screenplay by Nicolás Casariego & Jaime Marques), and although it intrigues initially, its underlying premise, revealed in a third act 'twist,' is so illogical and just plain stupid any good will is thrown out the window. The movie jumps back and forth between Juan and Mia, establishing place with high overhead shots. Juan knows his mother Luisa (Pilar López de Ayala, "Mad Love," "The Strange Case of Angelica") sees Hollowface because when he gets back inside he rescues her from being strangled by the monster. Every night he lies awake, anticipating a visitation. A ceiling stain spreads and drips blood onto his face. Luisa, her own nerves shot, consults their priest, Father Antonio (Daniel Brühl, "Goodbye Lenin!," "Inglourious Basterds"). At her grandparents' country house, Mia climbs a tree and is drawn to a deep, dark knot which holds a hand written tale. She reads to her class about how Hollowface needs to steal the face of a child for his own, but the story isn't finished and her teacher advises her to carry on. But as she does so, the faceless fiend begins to make itself known from the dark recesses of her closet. At first dad (Clive Owen, "Children of Men") dismisses her night fears, digging out an old children's book called Boo, then recreating the monster to burn in effigy (really? a parent would light a virtual bonfire in a suburban back yard?). But he's not gone and when John's next called into his daughter's bedroom, he sees it emerge with his own eyes. Mia is left unable to speak (the intruder 'stole' her mouth) and the family consults psychologist Dr. Rachel (Kerry Fox, "An Angel at My Table," "Bright Star"). Audiences may begin to pick up on the film's own psychology after noticing how heights play into the plot, or note that while the English turn to medical professionals, the Spaniards turn to Catholicism. But once all this begins, the film's already doomed by red herrings and stupidity. "Intruders" isn't the kind of film one can watch a second time to see if the 'twist' works - believe me, it won't unless we're to believe that a principal character had severe memory loss or that the psychological wounds suffered by one family could 'jump over' to another. And while Fresnadillo knows how to create mood and can conjure some creepy effects, most of them are sub par. In Spain, Hollowface looks like a Harry Potter Deatheater but is much more chillingly 'real' in England. John Farrow sitting on a construction beam high above the city screams rear projection the likes of which have not been seen since Hitchcock, fine in his day, but no longer. Those shared ceiling stains dripping blood have no tie in whatsoever to the revealed lore and a pseudo-European 'exorcism' is staged in a location too obviously art-directed to be threatening. The film also leaves us wondering just how a construction worker can afford to live in the pricey neighborhood the Farrows call home plus drive a Range Rover or why the antique teddy bear he presents to his daughter on her twelfth birthday is so commented upon only to be dropped from the story. The most mysterious thing about "Intruders" is how the project drew the talent it has (the cast also includes "Black Book's" Carice van Houten as Susanna Farrow). Seeing as how he's gone from a 2004 Oscar nomination to protecting teenaged girls in his last three films, Clive Owen appears to have a career in freefall. Fresnadillo, hopefully, will go back to writing his own material.