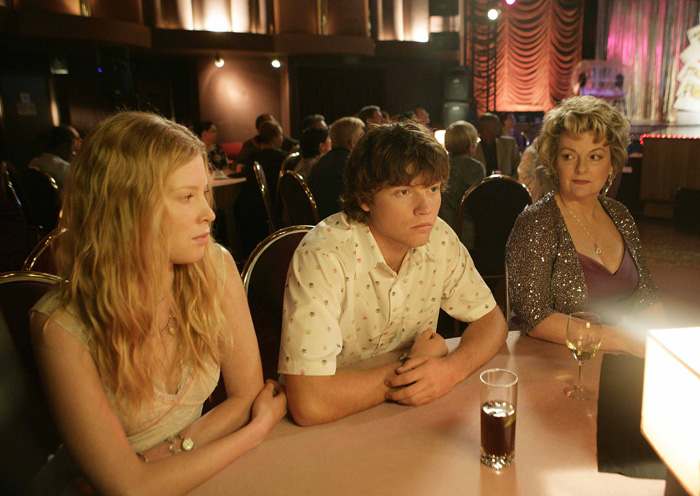 Jean Dwight (Brenda Blethyn) is a stage comedian known for her bawdy, sometimes raunchy routines. She has two sons, 21-year old Tom (Khan Chittenden) and developmentally challenged Mark (Richard Wilson), and she does not want to share their love – with anyone. Thus, she is more than a little upset when Tom informs her about his new girlfriend, Jill (Emma Booth), in Introducing the Dwights.”

This is a one-note film by director Sherie Nolan focusing on Jean’s obsession with keeping her sons love and affection for herself only. She does not intend to give it up, either, when she meets usurper Jill. Tom thinks differently, though, as his feelings for the pretty girl grow stronger and stronger. It becomes a battle of wills as Jean uses every weapon in her mom arsenal to drive a wedge between Tom and Jill. This story about a possessive, even selfish, woman and her loving sons is spiced up a bit with Jean’s bawdy vaudeville act and a sprinkling of quirky characters, including the boys’ father, John (Frankie J. Holden), a has been country-western singer now working as a security guard and Jean’s ditzy best friend Lana (Rebecca Gibney). Brenda Blethyn never elevates Jean above two dimensions and her comedy act is never all that funny. Tim and Jill are a nice couple with Chittenden and Booth developing a nice, youthfully lustful chemistry. The real pleasure in “Introducing the Dwights” is Richard Wilson’s challenged Mark. The young actor imbues warmth, humor and intelligence in his character. It could have been a schmarmy performance but Wilson rises above it. This Aussie import has a certain amount of charm, especially from the younger actors, but it is predictable and a little shrill.