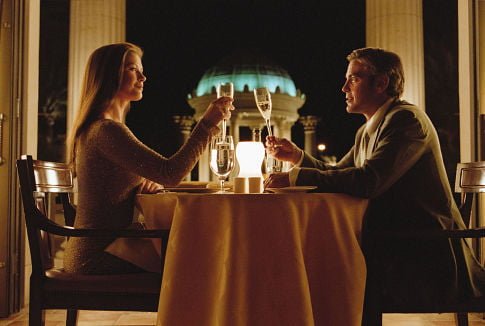 Miles Massey (George Clooney) is LA's most formidable divorce lawyer. Marylin Rexroth (Catherine Zeta-Jones) is a gold digger looking for independence via a rich husband. She's just nailed hers, real estate tycoon Rex Rexroth (Edward Herrmann, "The Emperor's Club"), with a videotape from P.I. Gus Petch (Cedric the Entertainer, "Barbershop"). Miles outfoxes the fox with a surprise witness and she's left bereft, but Marylin comes back for revenge trailing a rich Texas oil tycoon behind her. Miles and Marylin are about to engage in some "Intolerable Cruelty."

The directing/producing/writing team of Joel and Ethan Coen have turned a script polish into their first commercial flick that didn't originate on their own typewriter (story by John Romano and Matthew Stone, screenplay by Robert Ramsey & Matthew Stone and Joel & Ethan Coen). "Intolerable Cruelty" is lighter than the rest of the Coen filmography, but it bears their distinctive offbeat, stylized touch and inspired casting right down to the smallest role. Miles is so good at what he does, he's coasting along, in need of a challenge. When Marylin takes on the impenetrable 'Massey pre-nup' before wedding Howard D. Doyle (Billy Bob Thornton), Miles becomes concerned and a bit besotted ('You fascinate me'). Miles attends the wedding and is floored with jubilation and admiration when Howard calls for some barbecue sauce and proceeds to eat the pre-nup as a gift to his new bride. Marylin coolly accepts Miles's praise, but tells the ardent lawyer she couldn't possibly think of having dinner with him until three months had passed and she'd nailed the oilman. When Miles travels to Las Vegas to give the keynote address to the National Organization of Matrimonial Attorneys Nationwide (as in 'let N.O.M.A.N. put asunder'), who should he run into but the emotionally fragile rich divorcee Marylin Rexroth Doyle. One Scottish wedding chapel later, and Miles's speech has become a paean to love, but he soon discovers that without his famous pre-nup, even one that would have protected Marylin, he's a sitting duck. From the introductory shot of Miles, giving garbled instructions on his cell phone, his teeth surgically shrouded as his whitening treatment cures, we know we're in the movie world of the Coen brothers. The eternal, screwball battle-of-the-sexes, cross double-cross concept may not have been theirs, but all the grace notes that give a film its character surely are. Dialogue repetition (anyone who doesn't have a Massey pre-nup is a sitting duck, spouses are 'nailed' in divorce cases), outrageous character names and traits (hitman Wheezy Joe (Irwin Keyes) constantly sucks on his inhaler, Heinz the Baron Krauss von Espy (Jonathan Hadary) massacres English while cradling a ridiculous pooch) and absurd references (Sir Edmund Hillary's Everest guide, Tenzing Norgay) are all classic Coen. The filmmakers even include a seemingly superfluous scene in which a nervous Miles is called to the office of (very) senior partner Herb Myerson (Tom Aldredge) as an elaborate setup for a brilliant visual sexual metaphor in a return visit. The animated Victorian hearts and flowers title sequence is also one of the most memorable of the year. Clooney, an impossibly handsome man who isn't afraid to make himself look foolish (a case of bed head when he's awoken in the middle of the night is laugh out loud funny), riffs on his "O Brother, Where Art Though?" performance, perfectly tuning his exaggerated reactions to the tone of the film. He's got a simply great sidekick in worshipful associate Wrigley (Paul Adelstein, "Bedazzled"). Adelstein stays in step, yet one step behind Clooney in a performance that is essential to making "Cruelty's" comedy click. Clooney and Zeta-Jones, of course, are the main match, and their sexually loaded banter sparkles. Zeta-Jones so easily could have come across as unlikable playing such a hard-hearted manipulator or men, but the small twinkle she adds to her placid coolness instead intrigues us along with Miles. The supporting cast is an embarrassment of riches. Geoffrey Rush kicks off the film as a ponytailed producer, hilariously singing along to Simon and Garfunkel as he speeds home to discover his wife in bed with the pool man (they have no pool). Cedric the Entertainer's exuberant cries of 'I'm gonna nail you!' while taping Rex with his motel room bimbo are even funnier when the tape is replayed in court. Billy Bob delivers a classically cartoonish dumb rich man's son complete with Texas twang. Julia Duffy is perfect as the preternaturally preserved multiple divorcee who is Marylin's best friend. Hadary, Aldredge and Keyes all stand out in their tiny but extreme roles. The production is glossy, all impossibly clean and expansive L.A., Beverly Hills and Las Vegas. Zeta Jones is costumed in simple but chicly sexy suits and dresses, her simple blunt cut tresses making a statement of their own. Clooney is Cary Grant elegant, from dressing gowns to suits, although he somehow makes an appearance in a kilt quite comical. "Intolerable Cruelty" weds inventive filmmakers with a perfect cast. The audience should be delighted to attend the reception.