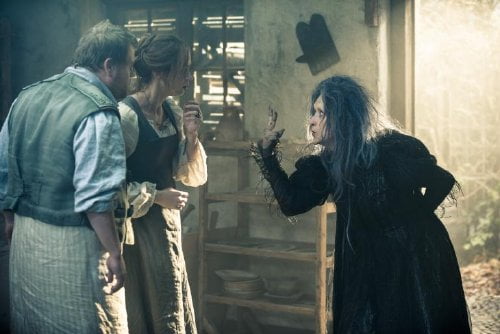 Everyone is familiar with the Brothers Grimm and their oft frightening fairy tales of witches and wolves. Song-meister Stephen Sondheim mashed up their and other fairytales – Red Riding Hood, Rapunzel, Cinderella and Jack and the Beanstalk – for the popular Broadway play which, in turn, spawned the movie version of “Into the Woods.”

An interview with composer/lyricist Stephen Sondheim this past summer apparently misconstrued his words, starting a brush fire over Disney's supposed sanitization of his and screenwriter James Lapine's source material. Fear not as this "Into the Woods" is faithful to the original Grimm stories as well as the Broadway musical's dark themes. Beginning with the magnificently staged 'I Wish,' which introduces the baker (James Corden, "Begin Again") and his barren wife ("Emily Blunt, "Edge of Tomorrow"), Jack (Daniel Huttlestone, "Les Misérables") before his beanstalk, his mother (Tracey Ullman), Red Riding Hood (Lilla Crawford, a Broadway Annie), Cinderella (Anna Kendrick, "Pitch Perfect"), her stepmother (Christine Baranski) and two awful stepsisters (Lucy Punch, "You Will Meet a Tall Dark Stranger" and Tammy Blanchard, "Moneyball"), the film captivates immediately. The witch (Meryl Streep) is the binding force that will make these characters and more all cross paths until they learn they should be careful what they wish for. Unfortunately once her demands have been met, the film loses quite a bit of steam, the film's relatively low budget more apparent when Jack's giants enter the picture. But until that happens, there's a lot to love here. Kendrick displays the most agile vocal talent with the tongue twisting lyrics to 'Steps of the Palace,' but Streep's in fine form as well, her singing ability tested more than ever before. Depp's Big Bad Wolf is far from his best performance, but his song, 'Hello Little Girl, is the film's creepiest, as he plays up the sickening sexual innuendos in the already blunt carnality of his predatory come on (Crawford's a little too Broadway for the movie adaptation). Chris Pine sends up his golden boy image as the Prince who's charming if not sincere, his singing amusingly exaggerated with trills and flourishes, but his shared number with Rapunzel's (Mackenzie Mauzy, TV's 'The Bold and the Beautiful') Prince (Billy Magnussen, "The East") begins the film's bog down. Grade:

I am definitely NOT a fan of musicals with a mere few that I actually enjoyed, like “The Umbrellas of Cherbourg,” “My Fair Lady” and “The King and I,” so I was less than thrilled with the prospect of a Stephen Sondheim musical directed by Rob Marshall. At first, as the individual fairy tales mentioned above follow their own paths, I was intrigued – especially with the very cool number with Red Riding Hood (Lilla Crawford) and the Big Bad Wolf, played with savor by a zoot-suited Johnny Depp. Then, the stories collide when a childless couple (Rob Corden and Emily Blunt) make a deal with the Witch (Meryl Streep) that involves the possessions of the players in the fairy tales. This is where “Into the Woods” splinters (pun intended) into the mash up that the film turns into. Sure, there are decent vocal performances (with Anna Kendrick’s performance my favorite by the film’s stars) and clever lyrics to the many songs but, again, I am the wrong person to judge a musical. For fans of stage and screen musicals, though, “Into the Woods” should be a big hit. With that said,