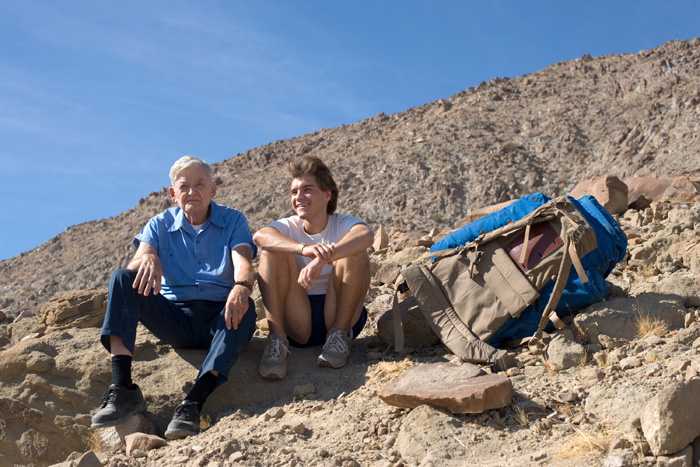 “There is pleasure in the pathless woods, There is rapture on the lonely shore, There is society where none intrudes, By the deep sea and the music in its roar; I love not man the less, but Nature more.” -- Lord Byron

Christopher McCandless (Emile Hirsch, "The Girl Next Door," "Alpha Dog") was a star student and athlete who followed his parental game plan through college graduation before chafing against their materialism and tempestuous home life. Without a word, he gave his $24,000 grad school fund to Oxfam and set off across the country with $500 and a desire to disappear "Into the Wild." Writer/director Sean Penn isn't tinkering around in intellectual indie land anymore. In adapting Jon Krakauer's novel, Penn's maturation as a filmmaker is stunningly complete. "Into the Wild" is a riveting, spiritual revelation - one young man's journey to find himself that ends in folly unmourned. Beginning at the beginning, Penn lays the McCandless family groundwork on Christopher's graduation day. Dad Walt (William Hurt, "A History of Violence," "Mr. Brooks") turns spiteful when his gift is rebuffed, mom Billie (Marcia Gay Harden, "Pollock," "Mystic River") is conciliatory while exhibiting the same behavior her son is condemning. Sister Carine (Jena Malone, "Donnie Darko," "Pride & Prejudice") is quiet observer and thoughtful narrative guide. Christopher covers his tracks as he sets off in his old junker. By the time he's been forced to abandon it in the mud and set off on foot, redubbing himself Alexander Supertramp, his folks are just beginning to realize he may have slipped their sphere of influence. Parental guidance now comes from the more liberally attuned Rainey (the film's marine coordinator Brian Dierker in a knockout debut performance) and Jan (Catherine Keener, "Capote," "Friends with Money"), 'rubber' tramps of free spirit yet wise advise and cautious concern. After a few days, he slips away from them too, and shows their influence when he takes up hard labor with hard drinking wheat farmer Wayne Westerberg (Vince Vaughn, "The Wedding Crashers") in North Dakota. That idyll is cut short by the FBI, who arrest the farmer (one of the film's only failings is that the 'why' of this is unclear at best) as Christopher slips back onto the road where he will break the law himself by white water canoeing down the Colorado River without a permit. A violent dispatch from a train freight car finds him in a downtown LA homeless shelter, but the city has been bred out and so Christopher delights Jan by showing up in Slab City where he has a brief romantic dalliance with underage songstress Tracy (Kristen Stewart, "Panic Room," "Zathura," "The Messengers") (and where Dierker gets the film's flat out funniest line). One last stop finds him mentoring senior citizen Ron Franz (Hal Holbrook, 1967's "Mark Twain Tonight!," "All the President's Men") who takes him as an apprentice to his leather working business. Then, with what he believes to be enough supplies to last the winter, Christopher makes his way to his final destination - the great Alaskan wilderness. Penn weaves his story using a flashback structure so that we experience Christopher's journey in parallel with his final adventure, giving us insights into the significance past events play further along in his story. Poetry and original music by Michael Brook, Kaki King and Eddie Vedder comment on Christopher's interior world while Hirsch, who dieted down to 115 lbs. for the film's end, provides the physicality. Penn and his cinematographer Eric Gautier ("Gabrielle," "Private Fears in Public Places") also make effective use of close-ups to bring us into the characters' states of mind while medium and long shots capture the grit of life on the road and the severe beauty of the wilderness. Penn uses all his components to create the ultimate road movie - one whose interior is at least as weighty as its environs. Most significant of all is how he has envisioned the final leg, the step off this mortal coil that is presented as a horrific mistake morphing into a new level of discovery. Hirsch grounds the film with his solid performance, but it is in support that the true gems are to be found, first and foremost nonprofessional actor Dierker whose warm and humorous understanding of human nature are enveloping in their charm. Keener, too, is terrific as the flip side to Harden - a wounded mother aching with maternal need. Holbrook is a gem as an old man set in his ways who lets a young man's idealism nudge him out of his comfort zone. In one quick scene, Thure Lindhardt and Signe Egholm Olsen provide a humorous interlude as less spiritually motivated Danish backpackers. Krakauer's take on McCandless's state of mind has been debated and Penn does nothing to question it, but in going on the same presumptions Penn has created a road movie of poetic vision. Just when you think the film is getting a little lengthy, it pulls you in again, enthralling through its cathartic climax.