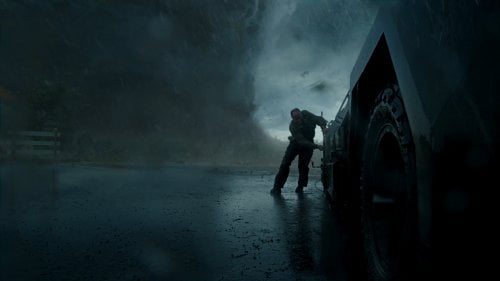 When Pete (Matt Walsh, HBO's 'Veep') realizes he's 0 for 365 in finding a tornado for his documentary, he begins to take things out on his meteorologist Allison (Sarah Wayne Callies, 'The Walking Dead's' Lori), threatening to can her from his storm chasing team. With a huge storm system 200 miles north, the media points to Riverdale, but Allison sticks to her data, which targets Silverton. Pete reluctantly goes along and Allison's last chance brings them right "Into the Storm."

1996's "Twister" was far from a great film, but at least it had Philip Seymour Hoffman and flying cows. This latest fx extravaganza doesn't even have sharks and screenwriter John Swetnam's ("Step Up All In") attempt to add emotional undercurrents by weaving together the storm chasers with the story of Silverton High School's vice principal Gary Fuller (Richard Armitage, "The Hobbit's" Thorin) and his two sons is mostly corn. There's a couple of (weak) yuks provided by Jackass wannabe amateur daredevil Donk (Kyle Davis, TV's 'Enlisted') and his butthead pal Reevis (Jon Reep, "Harold & Kumar Escape from Guantanamo Bay") and one truly memorable moment (lifted from "The Right Stuff"), but considering all its tornado devastation, "Into the Storm" is flat. Part of the reason for this is director Steven Quale's ("Final Destination 5") partial commitment to the found footage device. Some filmmakers are able to incorporate this effectively (see "The Blair Witch Project," "Chronicle," "The Den" or even "Earth to Echo"), but too often Quale resorts to the camera-falling-during-action, lending confusion to the visuals. Fuller has some ill defined video time capsule project which necessitates interviews which apparently are supposed to comment on the fragility of life come film's end, but the screenplay isn't strong enough to give it any impact. The subjects are just a bunch of talking heads that cheapen the production. What high school would continue with an outdoor graduation ceremony in light of tornado warnings? Well, Silverton's, of course and Fuller's eldest, shy AV club son Donnie (Max Deacon, TV's 'Hatfields & McCoys'), is signed up to document it. But more energetic sophomore brother Trey (Nathan Kress, Nickelodeon's 'iCarly') pushes Donnie into helping out his long held crush Kaitlyn (Alycia Debnam Carey), whose 'must be submitted by end of day' internship video has become corrupted. So off they go, traipsing out to an abandoned paper mill with dire environmental problems leaving the graduation coverage in Trey's hands. Meanwhile Pete's team is assembled in a Silverton motel where Allison's guilt over having been away from her five year-old daughter too long is about to be assuaged when presto - hail begins to rain down and the action finally kicks into gear. If one tornado is good, six are better, especially when one ignites with the fire started in a used car lot (firenado!), sucking up Pete's most reluctant team member. But we're still not done, as two massive funnels join forces for an EF5, the biggest tornado in history to head straight for the school where those graduation attendees think they're safe. (Those giant passenger jets you've seen getting sucked up in the trailer? Well, they're plopped into the climax, an airport big enough to harbor them suddenly appearing on the outskirts of this podunk little city.) The thing is, none of the people in this movie make us care - they and their problems are just a pile of cliches, leaving nothing but disaster effects and Pete's bullet proof glass and steel storm chasing tank, Titus, with its rotating glass turret to watch. It's not enough to sustain a film whose trailer delivers all its action. Grade: