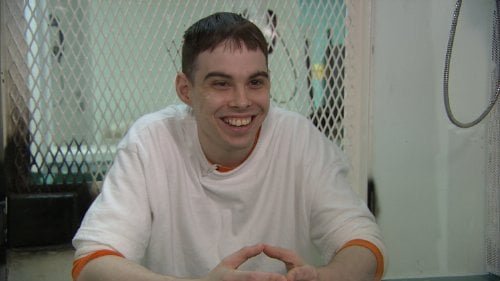 Uber-filmmaker Werner Herzog has created some of the best documentary works in filmdom, like “Cave of Forgotten Dreams” and “Lessons of Darkness.” He turns to the death penalty for his look into the life of one young man, Michael James Perry, who is soon to be executed (and was on 1 July 2010) by fatal injection for the brutal murders of a mother, her son and his friend and he stares “Into the Abyss.”

Conroe, Texas is a place where gated communities coexist with trailer parks. Ten years ago, the two sides of Conroe collided when Jason Burkett decided he wanted to steal the red Camaro of an acquaintance. He and his homeless friend Michael Perry went to his home, and, finding only Adam's mom Sandra Stotler there, shot her. Later, they killed Adam and another teen. Writer/director Werner Herzog talks to the victim's families, the police, the prison's chaplain and executioner and the perpetrators as the all stare "Into the Abyss." Werner Herzog has chronicled all kinds of extreme situations in his documentaries over the years, but "Into the Abyss" is an odd one. The case is controversial, with Perry, who Herzog spoke to eight days before his execution in July, 2010, maintaining his innocence while implicating police. Maybe the recent events of the West Memphis 3 case make me automatically leery of Southern justice, but I wonder why it was this and not a more clear-cut case that drew the German filmmaker. Herzog presents the facts from the police point of view without question (for a stretch the film resembles a top shelf version of a '48 Hours' true crime episode)? Maybe there are hints near the end of the documentary, when things begin to get a little wonky. We're introduced to Melyssa, a woman who married Jason Burkett despite his 40 year prison sentence. She confides that she's pregnant even though the most physical contact she's allowed with her husband is to hold his hand. We see her ultrasound and damn if that fetus doesn't look like a demon waiting to emerge. Then there's the Stotler daughter, devastated that she lost her mother then was given hope that her brother lived when he hadn't. Herzog makes her pain and her conflicted feelings about capital punishment apparent. Then she mentions the fact that her father and brother were killed by being hit by a train. With the family dog. A moment later and she's talking about the uncle who committed suicide and the one who OD'd. There are more. This is the kind of bizarre Americana Herzog is drawn to. But this time we don't hear him making jokes. The off camera director is somber, even a bit churlish (he takes Perry aback by making it clear that although he can sympathize that the kid drew a bum deal he doesn't have to like him). It is frustrating how many questions hover around these people while Herzog ponders something else. Just who is Melyssa and how did she get involved in Burkett's case? How did a kid from the wrong side of the tracks, one whose dad spent the better part of his life in jail, become friends with Adam? Herzog does do a terrific job linking broken homes to crime. His interview with Burkett's father Delbert, also in jail with a weirdly coincidental 40 year sentence, shows a man of surprising thoughtfulness and regret. The film is at its most moving when he talks to Fred Allen, former captain of the death house. Allen describes the process of lethal injection and how, after taking part in over 125 executions, he suddenly found he could do no more, that he could not stop shaking. Herzog's film examines the taking of life, whether the person who is dying is a criminal (and Allen's undoing occurred after the execution of a female inmate) or a woman interrupted while making cookies, as Stotler was, but it does so in an oddly distanced manner. Even his HD camera images sometimes appear so sharp that his subject is separated from the surrounding environment. Herzog's made it clear in interviews that he didn't have good friend Errol Morris's 'Thin Blue Line,' the documentary which helped get an innocent convicted man freed, as an agenda here, but his own is somewhat muffled. Michael Perry may have been able to contemplate his own death, but Sandra Stotler didn't.