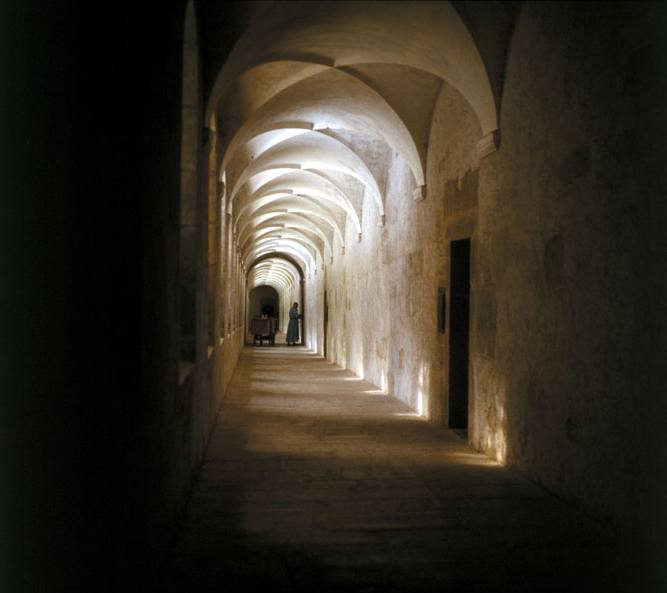 The Carthusian Order of Catholic monks has existed for 1,000 years in the Alps of Grenoble, France. In 1984, German filmmaker Philip Gröning wrote for permission to film in their charterhouse, the Grande Chartreuse. Sixteen years later, they allowed him in. Gröning lived by their sides for six months, photographing an experience that brought him "Into Great Silence."

This lulling and contemplative work burrows into the spirituality of these men, who live and work together but maintain silence and life in a cell. Rather than provide any history, or state the rules of Carthusian existence, Gröning captures the images and sounds of their daily rituals throughout the seasons until the viewer is entranced by the beauty of the everyday. At 160 minutes, the film might sound like a chore to sit through, but even though Gröning's work is far from traditional, it has a pace and a rhythm. We see exterior shots of the magnificent buildings, sometimes shot with time lapse photography that turns the sky into water or animates the stars. We arrangements of commonplace articles in still lifes, often enlivened by shafts of light and we follow individual monks - a tailor - a gardener - as they go about their business (one still shot of a barber monk strongly suggests Vermeer). The peeling of bells shatters the silence to call the men together for their morning and evening prayers and Gregorian chanting. Every so often, a biblical piece is emblazoned on the screen, sometimes followed by unblinking head shots in groups of three of individual monks. Sound is ever important, for in the quiet we hear the fall of snow, an almost constant birdsong, the drip of alpine water, the crystalline chiming of cow bells. Amusingly, the monks themselves make jarring sounds, clumping about in heavy footwear in the vast, echoey living space. Perhaps most amazing is that Gröning is able to capture individual personalities. These guys have outings where they talk and joke and play in the snow. An early scene, where two new recruits are brought into the fold, shows each inhabitant greet them - some are jovial, others severe, none the same. An old, blind monk describes very simply the joy of giving oneself over to God. Gröning finds Him in his filmstock, from the geometrical patterns caused by rain landing on a watery surface to some tree branches dancing in the wind. He grants us understanding of a little chosen lifestyle.