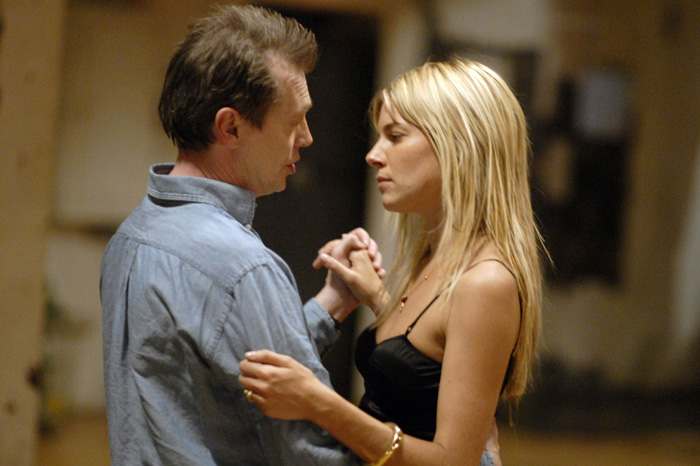 Pierre Peders (Steve Buscemi) is a hard-charging war correspondent who has laid his life on the line to bring in the big story. So, it not hard to see why he is royally PO'd at his editor when he is assigned to meet with a popular, vapid, actress, Katya (Sienna Miller), to get a fluff piece "Interview."

This is an even two-hander directed by Steve Buscemi in his fourth outing as a helmer. He and David Schecter wrote the script about two people, oil and water, thrown together as Pierre gets assigned the ultimate puff piece - interviewing TV and movie 'star' and scandal magnate Katya. Their first meeting in a trendy restaurant is with mutual disdain. For him, it is resentment over losing a juicy political story because of his stupid assignment. For her, it is Pierre's attitude and his not taking her seriously, not bothering to prepare for the 'view. The interview is over before it even begins. They part with bad blood between them, but fate takes a hand and the cab Pierre is in rear ends a truck while the driver tries to schmooze the walking Katya, Pierre gets a bloody bump on his noggin and Katya takes him to her nearby loft to care for his wound. As the night progresses, they bury their initial sniping and open up to each other. But, what each says must be taken with a grain of salt and you are left to wonder what is true and what is not. Although a few of the scenes between the two stars are forced, there is a good deal of chemistry, too. Buscemi and Miller verbally joust as they sit, drink and talk with Katya intermittently taking calls from her best friend and her boyfriend. While she is on one of these calls, Pierre taps into her computer and finds some revealing, even scandalous stuff. As the film progresses, it is a battle of wills and wits and what is real and not. The bulk of "Interview" takes place in Katya's expensive loft apartment and it becomes a character in the film. Good attention to set details, like Katya's bathroom decorated with vintage pinup pictures, make the place feel like someone's home and not a set. Lensing, by Thomas Kist, is often shot up close with Katya faring better than the somewhat haggard-looking Pierre. "Interview" is a short movie rich with often rapid dialog and fills its under 90-minute run time efficiently. Buscemi's strength is his build up of the characters and he does well as both director and star. Sienna Miller gives one of her more distinct performances to date and comes across as a real person, not just a media diva.