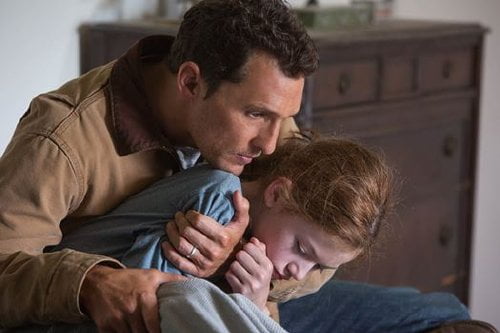 In an indeterminate future, crops are falling to blight, oxygen is being replaced by nitrogen and dust storms sweep the landscape. Former NASA pilot Cooper (Matthew McConaughey) is frustrated that his son is being groomed for the family farm by an educational system that now teaches the Apollo missions were faked to bankrupt the Soviet economy. He's especially close to his daughter Murph (Mackenzie Foy, "The Twilight Saga: Breaking Dawn"), who's had strange activity in her room attributed to a ghost. When dust settles on her floor in a specific pattern, Coop decodes it as binary and follows the coordinates to a remote secret NASA station headed up by his old Professor (Michael Caine) who recruits him to pilot a risky mission to find a habitable planet for the human race in "Interstellar."

It's interesting that cowriter (with brother Jonathan)/director Christopher Nolan's latest epic is being released on the same day as James Marsh's "The Theory of Everything." Marsh's film about Stephen Hawking illustrates how the power of love enabled Hawking's genius to flower with theories about time and the universe whereas Nolan offers that love is the very basis of our reality within space and time. And yet where the Hawking biopic is warm and emotionally involving, Nolan's can be a bit chilly and unwieldy, the science behind his fiction often chafing against his more unquantifiable concepts. "Interstellar" is a flawed work with a huge reach. Employing interviews with seniors looking back à la "Reds," Nolan gives us tales of life as it once was while tipping us off that it has continued, but his actual storytelling leaves us to fill in blanks. Just where does the drone which appears over a cornfield come from and why does Coop appear to have the ability to pilot it remotely? Through conversations with school officials and his father-in-law Donald (John Lithgow, "Love Is Strange"), we can gather that earth as a whole has rejected space exploration as a means to survival ('We used to look up at the stars in wonder, now we look down to find our place in the dirt'). There's talk of 'gravitational anomalies,' but not what they mean. At NASA with Murph, Coop learns that a secret Lazarus mission sent scientists into space ten years earlier through a wormhole near Saturn which appeared 48 years prior. 'They' put it there, Professor Brand's daughter Amelia (Anne Hathaway, "The Dark Knight Rises") informs him, 'just when we needed it.' She'll be one of his colleagues on the Endurance along with Doyle (Wes Bentley, "The Hunger Games"), Romilly (David Gyasi, "The Dark Knight Rises," "Cloud Atlas") and TARS (voice of Bill Irwin), a military robot programmed to be 90% truthful as he's dealing with 'emotional beings.' Murph is devastated that her father is leaving, convinced that her dust writing was Morse Code for 'Stay,' and refuses to say goodbye. The journey to the wormhole alone, for which the crew will be sleep suspended, will take two years. Their intent is to find the female scientist whose transmitter is still live and whose data indicates sustainable conditions while the Professor continues his work on the gravitational equation for transporting humankind off of Earth. The film plays with time and space (at one point an excursion to a planet for a matter of hours returns Cooper and Brand to a Rom who's aged 23 years in their absence), but the scientific jargon races by so quickly it's often difficult to maintain a grasp on what's going on (is it that nasty Black Hole sucking gravity that's causing all this?). Amelia defends her position on their next move with a dialogue on the power of love, but Cooper overrides with logic. Betrayals in space and back on earth articulate the survival instinct, but Nolan stays true to his own course. With "Interstellar," one can see the director of "Inception" reaching for his own "2001" with the generational import of parents and children his underlying theme (Murph grows up to be played by Jessica Chastain (and later, Ellen Burstyn), bitter over her father's abandonment until she comes to a startling realization while Amelia faces a different truth about her own Dylan Thomas-quoting dad). There are strong elements of The Twilight Zone episode 'The Long Morrow' (everything seems to come back to Shakespeare and Serling) within the Nolan brothers' discourse on love and space exploration (and Stephen King's 'The Stand' is pointedly pictured in Murph's bookcase). But for all its trippy IMAX visuals, the film only has one real moment of pulse pounding suspense (involving an uncredited star cast very much against type) and Hans Zimmer's score is so amplified in the mix, a lot of that fast and furious scientific dialogue is made even murkier. "Interstellar" is an ambitious film, but it's difficult to get swept up in its sweep.