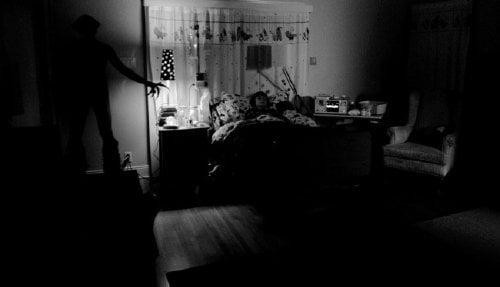 The Lambert family is happy to have moved into their new house, but after a fall in the attic, their younger son Dalton (Ty Simpkins, Wilson's "Little Children" costar) falls into a coma-like state which puzzles their doctor. Mom Renai (Rose Byrne, "Troy," TV's 'Damages') gets spooked after seeing strangers appear in the house, so Josh (Patrick Wilson, "Lakeview Terrace," "Morning Glory") agrees to move again. When the problem follows, expert Elise Rainier (Lin Shaye, "There's Something About Mary") is called in and tells them it is their son who is haunted and the beings who haunt him are "Insidious."

From the writer (Leigh Whannell)/director (James Wan) team behind the original "Saw" comes a movie Film Comment calls a 'must see.' Being a horror fan, I had high hopes for "Insidious," hopes which the elegant and eerie opening credits did nothing to abate. The film begins well, bridges the middle with a comically creepy set piece, then goes to hell in a handbasket with a poorly conceived climax that serves no scares. Whannell has come up with one slightly different idea which he lays on top of themes taken from everything from "The Exorcist" to "The Orphanage" to "Paranormal Activity" while director Wan cops visuals from "The Shining," "Poltergeist" "Drag Me to Hell" and even that 'ghost' from "Three Men and a Baby." These two do not understand the concept of less being more. Songwriter Renai hears voices on the baby monitor and goes upstairs to investigate. Baby girl is screaming and an odd sound emanates from the attic. She finds nothing. Later that night, Dalton goes up and suffers a fall from a ladder. The next morning, he cannot be woken up. One night, all hell breaks loose - Renai sees a man in the house, Josh checks the front door and alarm, runs upstairs when his wife screams, then finds the front door wide open. This is "Paranormal Activity" type stuff without the 'found footage' gimmick and it's effective. Josh starts pulling away, staying late at school. It's meant to be a later twist, but it is very clear that Dalton's problem is connected to something that happened to Josh as a young boy. In the next home, this is made more apparent by the unquestioning support Renai gets from her mother-in-law Lorraine (Barbara Hershey, "Black Swan") who is the one to suggest bringing in her 'friend,' Elise. Wan introduces humor at the midpoint, mostly through the use of a song that takes on a malevolent edge, then ramps it up with Elise's technical assistants, Specs (writer Leigh Whannell, "Saw," Saw III") and Tucker (Angus Sampson, "Darkness Falls"), a comic duo who ably release some tension. But here is where things start going downhill. One short scene combines an obvious image rip from "The Shining" with Roy Scheider's 'We've got to get a bigger boat' reaction from "Jaws." There is nothing wrong with homage, but Wan seems to throw everything into the blender and the original spin Whannell has added is dubiously executed. And so, in the end, while "Insidious" has some big pluses - those opening credits that make you look for what's not right with the picture, childish clues ignored by adults, that inspired use of Tiny Tim's 'Tiptoe Through the Tulips,' one great jump cut, glimpses of eerie beings, some nicely made up still photographs - it is undone my some pretty big minuses - the silliness of connecting Elise to Specs with a gas mask and vacuum hose, Wan's 'soundstage in the dark' visualization of 'The Further,' an overabundance of ghoulies, non sequitur funhouse scenarios, a derivative ending which doesn't feel earned. "Insidious" is kitchen sink filmmaking - it keeps throwing stuff at you in the hopes something will stick.