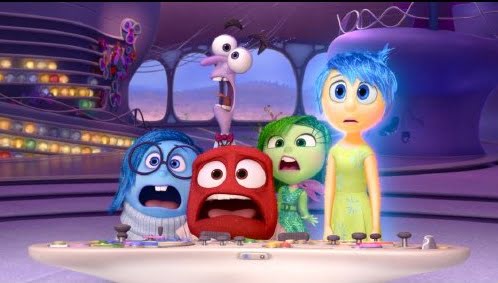 Although Joy (voice of Amy Poehler, TV's 'Parks and Recreation') is the first emotion Riley (voice of Kaitlyn Dias) experiences, it's quickly joined by Sadness (voice of Phyllis Smith, TV's 'The Office'). By the age of 11, five emotions make up her control center, but when Riley moves to a frightening new city, Joy and Sadness are swept to the far reaches of her mind. While Fear (voice of SNL's Bill Hader), Anger (voice of Lewis Black, TV's 'The Daily Show with Jon Stewart') and Disgust (voice of Mindy Kaling, TV's 'The Office') are in charge, everything is "Inside Out."

Since its premiere at the Cannes Film Festival the buzz has been building for Pixar's latest, it's first original screenplay since 2009's "Up" from that film's cowriter (with Meg LeFauve and Josh Cooley)/director Pete Docter ("Monsters, Inc."). It's been said that Pixar's gotten its mojo back after a run of disappointing sequels - but not so fast. Although "Inside Out" is ambitious, thought provoking and occasionally moving, its world is a bit inconsistent in its logic and it gets a low reading on the laugh meter (despite an early San Francisco Bear joke that will fly over the heads of much of the target audience). It is difficult to imagine kids much under the age of eleven or twelve understanding much of what's going on. We get two perspectives in "Inside Out." Inside is Riley's colorful mind, her five primary emotions in a control center where they attempt to steer her experiences to the best possible outcome. Out is a more conventional look at Riley's world beginning in Wisconsin with her Mom (voice of Diane Lane, "Secretariat") and Dad (voice of Kyle MacLachlan, "Blue Velvet"), both of whom encourage a love of hockey played on frozen ponds. Inside, Riley's emotions all want her to be happy, Joy quite protective of each spherical memory that pops in her color. At the end of each day when Riley goes to sleep, those colorful memory spheres are transported to Long Term Memory. But after a move to San Francisco for dad's job, Riley finds it nigh impossible to remain happy, even breaking down in tears during her introduction at her new school. In her mind, Joy is trying to keep Sadness from touching joyful core memories, the ones that power Riley's personality, because they're turning blue and it is this struggle that sets the opposing pair off on their adventure. I can't help but feel like "Inside Out" is an emotional response to the more logic-driven (and wittier) journey via "The Phantom Tollbooth." My first issue with "Inside Out" are those 'personality' islands, consisting of Hockey, Friendship, Family, Goofball and Honesty, three things and two traits. The five emotions, reflected in modified (and far funnier) versions in both mom and dad, are not given equal weight, Disgust, for example, around mostly to malign broccoli. Why are Fear and Anger male for Riley when mom and dad's emotions reflect their own gender? When Joy realizes that she and Sadness are in Long Term Memory with Riley's islands shutting down, her mission is to find a way back to Control. Along the way they will run into Mind Sweepers who toss fading memories into 'The Dump' ('does she need all the U.S. Presidents?') while taunting Control with replays of a gum commercial and Bing Bong (voice of Richard Kind, "A Serious Man"), Riley's long lost imaginary friend, part cotton candy, part elephant and part cat who wishes for nothing more than to be remembered. Bing Bong is "Inside Out's" heart and soul, much like Woody is to "Toy Story," but he doesn't prove the most reliable guide, leading Joy towards the Train of Thought with a shortcut through the restricted area of Abstract Thought (which leads one to ponder just why abstract thought is considered so dangerous, not to mention how the filmmakers neglected to pun on losing their train of thought). Imagination Land is, frankly, a bit boring, consisting mostly of a French Fry forest. The threesome also make it to Dream Productions in an attempt to wake Riley up before landing in the darkest depths of the Subconscious where such evils as Grandmother's old vacuum cleaner and a birthday party clown live. Hiring Pawnee's cheerleading optimist to portray Joy was a good call, but the character's design is a bit confusing - where the other four emotions are clearly identified with colors, Joy is yellow but has Sadness's blue hair and Disgust's green dress. The dejected humility in Smith's vocal performance is fitting for Sadness, whose importance in Riley's life is learned by all, loss a part of growing up (loss is the central theme in Docter's other Pixar films as well). But the film's MVP is Kind, who brings the same ridiculous brand of pathos to Bing Bong as he did to "A Serious Man's" Uncle Arthur. "Inside Out" is preceded by the short "Lava," a musical based on one song sung by a lonely volcano yearning for a partner like the creatures he witnesses frolicking in the seas and sky. It's neither earth shattering nor explosive, but simple and sweet. Grade: