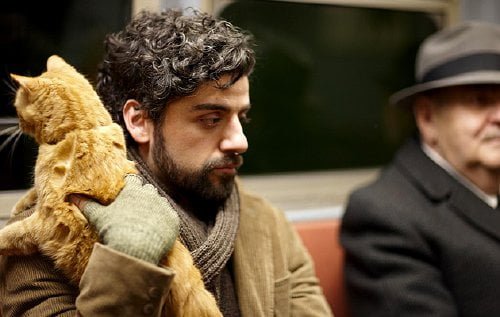 Back in 1961, right before Dylan and other folk musicians began to popularize the music, New York City's Greenwich Village was a nesting place for musicians who kept this American traditional music genre alive while living hand to mouth. One of the movement's purest artists struggled with more than finances, his unwillingness to get caught up in the demands of a traditional lifestyle often hurting those who got "Inside Llewyn Davis."

Writer/directors Joel and Ethan Coen ("No Country for Old Men") have made a bookend to their masterpiece "A Serious Man" with this circular study of a man spiraling into the forgotten life of an also-ran, this time his own refusal to sell out trumping God's interference. Very loosely based on folk singer David Van Ronk, the Coens' latest is a melancholy comedy which meticulously captures a specific subset of a place and time. In his first leading role, Oscar Isaac ("Drive") straddles the line between someone trying to do the right thing and moral bankruptcy all while serving up spot on song interpretations. After an introduction to the scene's real life Gaslight Club on MacDougal Street, where Llewyn performs 'Hang Me, Oh Hang Me,' a sentiment we will learn he is determined to fulfill himself, we see the man beaten to a pulp in its outside alley for reasons which are explained later. But this is just a prelude to Llewyn's couch hopping existence, and when he leaves his current crash pad, he inadvertently locks himself out with the Gorfeins' cat, the aptly named Ulysses. Any cat lover will be on tenterhooks as the singer makes his way from the Upper East Side to the Village via subway, loose cat in arms, until he gets to his next hoped for shelter, the apartment of folkies Jim (Justin Timberlake, earnestly white-bread) Jean (Carey Mulligan, "The Great Gatsby"). The cat's presence always signifies Llewyn's irresponsibility when his relationship with a child is at stake, and so, a furious Jean informs Llewyn he needs to come up for cash to abort the child he's impregnated her with. So, who's the first person Llewyn turns to for cash? - Jean's husband, of course. (Mulligan, all heavy eyeliner, bangs and turtlenecks, is the picture of the goddess folk singer, and her expletive laced rant on his lack of character is a defining gem.) Llewyn is a man caught between his father's blue collar life as a merchant marine and his artistic determination, but he's also intent on burning bridges at every turn. He steals from the manager who's trying to help him (Jerry Grayson, "Find Me Guilty," who along with Sylvia Kauders as his secretary Ginny make a formidable comedy team like something right out of Woody Allen's "Broadway Danny Rose"). When Jim offers him a recording opportunity on the delightfully goofy novelty song 'Please Mr. President' (augmented by Adam Driver's exaggerated vocal sound effects), Llewyn goes for the session artist cash grab rather than royalties, disdaining association with something so pop oriented. In his personal life, he no sooner goes to pay his abortionist (yes, he has experience here), than he learns his has credit from the last woman he sent there, who kept their child without telling him. His disdain for a working class way of life baffles his hard working sister Joy (Jeanine Serralles, "Two Lovers") who's fed up floating his preferred lifestyle. When Llewyn gets a chance at a ride to Chicago with Roland Turner (John Goodman, hilariously weird yet stunningly astute) and his valet Johnny Five (Garrett Hedlund, "On the Road"), he jumps at the chance to audition for Bud Grossman (F. Murray Abraham, "Amadeus"), *the* maker of popular folk singers. But after listening to Llewyn's heartfelt rendition of 'The Death of Queen Jane,' Grossman, this film's senior rabbi, remarks that 'he sees no money in it.' Success, it appears, comes to those like the clean scrubbed Troy Nelson (Stark Sands, "Flags of Our Fathers"), a soldier on leave from Fort Dix Llewyn chafes against at Jim and Jean's. The film at first almost seems like a comedic skewering its hapless protagonist, but the film gradually becomes drenched in melancholy. There are scenes which tear at the heart, like Llewyn's regretful abandonment of the cat-he-thought-was-Ulysses when Johnny Five is pulled over and arrested (the cat will make a pitiful appearance again, just after Llewyn's decided not to turn off at Akron, the home of his unknown child). Even when Llewyn gives in to economic reality, he's stymied at every turn, his merchant marine card expired, a mounting dues bill needing paid. A visit to his father's retirement home showcases the haunting 'Shoals of Herring,' Llewyn unwittingly finding the beauty in his dad's way of life. Cinematographer Bruno Delbonnel's given the film a wintery, washed out gray appearance which embodies Llewyn's state of being as well as the harshness of his environment. Sound, too, plays a role, as the tub-thumps of pavement breaks on the highway home from Chicago create a monotonous loneliness. And like that tornado that approaches the serious man, the Coens pull Llewyn in a circle, dropping him off right back where we found him, his beating caused by his artistic snobbery, his place with the much-abused Gorfeins, Ulysses running down the hall.