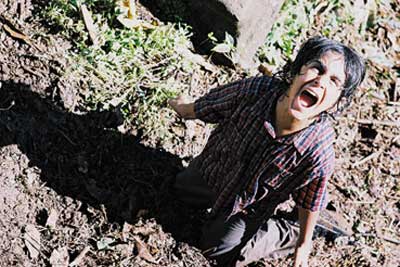 The civil war which raged in El Salvador in 1980 had many victims, but one special group, twelve year-old boys, had a particular cause for fear. That's the age when El Salvador's Army would seize them and train them to kill their own people. Cowriter (with Oscar Orlando Torres)/director Luis Mandoki ("Angel Eyes," "Message in a Bottle") tells the true story of one boy, Chava (Carlos Padilla), who represents his generation's "Innocent Voices."

After years churning out Hollywood flicks, Mexican Mandoki returns to his home country to tackle a meatier, independent project. Unfortunately, while his subject matter is dramatic and heart-breaking, his film is slow and repetitive. Mandoki's also allowed first-timer Padilla, a youngster who seems to have been cast more for his looks than his ability, to shoulder this weighty film, but at least the youngster is ably supported by some fine adult acting, most surprisingly from Leonor Varela of "Blade II" and TV's "Cleopatra" as Chava's mother Kella, proving that she's more than just a pretty face. The film begins with the dire image of its hero and several of his friends being marched along a dirt road, hands over their heads, by soldiers twice their height bearing weapons. Chava explains how tired, hungry and foot sore he is, and that there is no question these men mean to kill him. Retracing Chava's steps finds his poor peasant family living in a village situated between guerilla outposts and the El Salvadoran Army. Mother Kella (dad has left for the North, his status unknown) must protect three children from the constant strafings that cut across their home while also supporting them. Chava, the eldest at eleven, gets himself a job, has his first crush and, inspired by a visit from his Uncle Beto (José María Yazpik, "Crónicas"), begin to show the rebellious nature which will lead him to the predicament where we first found him. Mandoki falls into traps that Hollywood has apparently taught him, however. If one scene of bullets flying over terrified children works, four will work better he reasons. A slow witted man befriended by the children, Ancha (Gustavo Muñoz, "Amores Perros"), must be a sacrificial lamb. A striking visual of young boys hiding from the soldiers by lying above them on their rooftops is lessened by its reuse. The film's climatic moment fetishizes the death of innocence to a distasteful degree, using slow motion for poetry where abruptness would have brought the message home. Carlos Padilla is gifted with lush lashes framing huge eyes which in turn are framed by curly dark locks, an eleven year-old dreamboat for new teacher's daughter Cristina Maria (Xuna Primus). Padilla isn't bad, but in a time when audiences are astonished by one child performance after another, his tendency to border on mugging becomes annoying. He's more performer than actor, but he's reined in when facing off against Varela, whose concerned strain is evident. She also has real familial charisma with Ofelia Medina ("Before Night Falls") as her mother and Yazpik as her romantic brother. Also good are Jesus Ochoa ("Man on Fire") as an irresponsible bus driver who straddles the worlds between Ancha and the adults and Daniel Giménez Cacho ("Bad Education," "Nicotina") as the village's priest and moral backbone. "Innocent Voices" has a fairly unique take on telling a child's tale during wartime, but unfortunately it doesn't tell it well enough.

In San Salvador, during the tumultuous years of civil war during the 1980’s, both the right-wing, government-run Army and the FLMN rebel guerrillas conscripted boys as young as 12-years old to fight for their respective causes. 11-year old Chava (Carlos Padilla), though, is still just a kid, enjoying playing with his friends and being the man of the hose for his mother, Kalla (Leonor Varela). But, the war shows no signs of stopping and Chava will soon face the same fate as those before him in “Innocent Voices.” Expatriate Mexican filmmaker Luis Mandoki has had a middling successful career directing such films as White Palace” (1990) but is better known for more cloying flicks like “Message in a Bottle” (1999) and Angel Eyes” (2001). He returns to his Spanish-speaking roots with the gritty, oft gut-wrenching “Innocent Voices” and forgoes his usual fluff works. The story, which the director adapted with its creator, Oscar Orlando Torres, is an earnestly done work with a great deal of feeling. My problem with it, though, is that Mandoki beats you over the head with his “messages.” Life is notably tough for the locals in the small village. It becomes the nightly battle zone between the right-wing government soldiers and leftist rebels with the cardboard shanty houses in the middle of the fierce gunfire. For the residents it’s a terrifying, yet routine, event that takes its toll on them when stray bullets randomly kill many innocents. The arbitrary suddenness of the firefights is shocking and frightening, making you empathize with Chava and his family’s plight. But, this violence, as are the forced conscriptions, is repeated, with some variation, over and over again to the point where you say, “Enough! Get on with it!” Innocent Voices,” at two full hours, could have lost some of this baggage and been a better, tighter film for it. Chava’s predicament, along with the other village boys coming of age, is intriguing and handled with imagination. When word gets out that the Army is about to raid and abduct any boy who even appears to be 12, warnings are distributed and the kids hide in plain sight from their would-be captors. The sudden, frightening conscriptions are deftly handled from the boys’ points of view as they are unceremoniously rounded up and taken away from their families. These legal kidnapping often occur without warning, with no chance for the children to even say goodbye to their mothers and siblings – this is a society where the men have either taken sides or fled the country, abandoning kith and kin. It’s a harsh view into an alien world where violence and death are a daily occurrence. The matter-of-fact mayhem that is accepted by those caught in the midst of the civil war is palpable in its despair. The focus of “Innocent Voices” is on Chava and his family, particularly the boy and his mother. Young Carlos Padillo does a fair job as Chava but is too little experienced to really carry the film. Leonor Varela puts power into her performance as the family’s matriarch who is trying to keep things together, working hard and loving her kids, despite being abandoned and living in constant fear. The pale of Chava’s inevitable conscription is always there and the actress handles her duties well. The rest of the supporting cast, considering the two hour run time, are given sketchy treatment, at best. Innocent Voices” is a heartfelt production that maintains its humanity throughout but the hit-you-over-the-head scenes of sudden conscriptions, relentless violence and lack of real political stance keeps this from being as good as it should have been. A good bit of judicious editing, making the film tighter and better flowing, would have made a big difference.