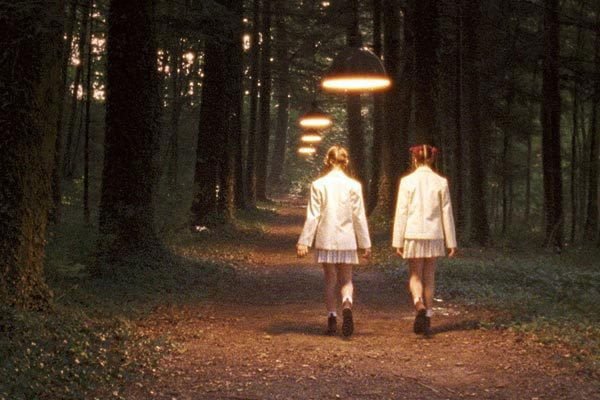 In the midst of a wood mysteriously circled by overhanging lights and a sentry-like hedge, young Iris (Zoé Auclair) arrives encased in a coffin into a subterranean room. She is received by others like her at an all-female boarding school that will prove the last outpost of their "Innocence."

Writer/director Lucile Hadzihalilovic has created a beautiful and provocative look at the sadness and joy of a woman's metamorphosis in "Innocence," a film that often seems like "Picnic at Hanging Rock" as directed by David Lynch. This intriguing movie provides one of the perfect anchors for the International Festival of Women's Films playing at Boston's Museum of Fine Arts from March 4 through April 7, 2006 (see schedule).

After establishing her natural setting, Hadzihalilovic's first shot is of the girls gathering around that child-sized coffin, emblazoned with the seven-pointed 'fairy star' of Wiccan beliefs. It is noteworthy that we're introduced to the girls from their waists down, as it will be their reproductive cycles which will determine their progression ("Innocence" is chock-full of ticking clocks and clock faces). Iris is given the red hair ribbons which denote the youngest of the group. The eldest, Bianca (Bérangère Haubruge), wears violet and the newest recruit is fascinated by her. Intrigue is added in that Bianca must leave each evening, but nobody knows to where.

Iris begins her schooling with swimming. The group of pre-adolescents enter a pond in all white clothing, like some kind of baptism ritual. Man made lights go on in the forest and we see a snail, a creature with both male and female characteristics. And just when we begin to wonder if these children are all alone, an old woman, Madeleine (Véronique Nordey), serves them dinner ('Madeleine is here to serve us - if she disobeys she'll be punished'). The next morning finds actual classroom instructors, Mademoiselle Edith (Hélène de Fougerolles, "The Sea," "Va Savoir"), who teaches the girls evolution and tells them we all spring from water, and Mademoiselle Eva (Marion Cotillard, "A Very Long Engagement"), the ballet instructor who will becomes attached to her charges even as she prepares them for leaving her.

Hadzihalilovic's film posits that women's bodies betray them into a man's world ('obediance is the path to happiness' they are told). Everything is magical and innocent for these young girls but there is always a sense of foreboding. Girls who attempt to leave meet horrible fates (Laura (Olga Peytavi-Müller) takes a boat which sinks immediately. Her body is burned on a funeral pyre like that of an Indian bride who must accompany her husband) or, like Madeleine, Eva and Edith, are doomed to stay forever, eternal spinsters. Miss Eva presents her class dressed as butterflies and they dance to an unseen audience who become threatening when a detached male voice calls out 'She's the prettiest.' The onset of menstruation announces that time has come to depart and we get a glimpse of Bianca on the outside, splashing her feet in a manmade fountain, a striking contrast to the natural waterfall which opened the film. There are many mysteries to delve into with "Innocence," like just what is the fate of the blue-ribboned girl chosen annually by the Headmistress (Corinne Marchand)? It is a seemingly coveted fate, but one which is never explained.

Arnaud de Moleron's production design ("Beau Travail," "Almost Peaceful") emphasizes greens and reds and cinematographer Benoît Debie ("Irréversible") attains an otherworldliness in his images even as they are rooted in nature. Lucile Hadzihalilovic has created a mesmerizing work that is at once eerie and beautiful. While one may not agree with the filmmaker's sentiment, one cannot but help admire her artistry in presenting it.