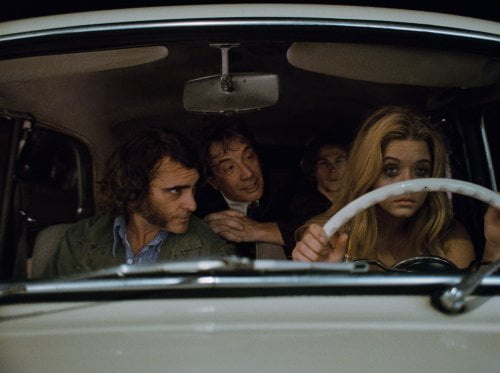 When his ex, Shasta Fay Hepworth (Katherine Waterston, "Night Moves"), shows up at his California seaside bungalow, "Doc" Sportello (Joaquin Phoenix, "The Master," "Her") notes how much her billionaire real estate tycoon lover's money has changed her personal style. When she tells him she's come because Michael Z. Wolfmann (Eric Roberts) is missing and she suspects his wife (Serena Scott Thomas, "Hostage") and her lover of having hidden him away in a mental hospital to make off with his money, Doc takes on a case that will expose every of the myriad avenues it leads him on as having been corrupted with "Inherent Vice."

Based on his last two films alone, one now expects a masterpiece from writer/director Paul Thomas Anderson ("The Master"). But with his fairly faithful adaptation of the Thomas Pynchon novel, the first filmmaker to have attempted the task, he's come up short. The film's been divisive since its premiere at the New York Film Festival, many finding it incomprehensible. It's not really. It may a big jumble, but like the book, it has its own logic, a post-60's disillusionment in the time of Charlie Manson, Vietnam and Ronald Reagan's governorship seen through the pot haze logic of Pynchon's noir surfer gumshoe (or in Doc's case, gumsandal). It's enjoyable, a "Chinatown" of its period, but it lacks the transportive psychedelia I expected, playing, and even more oddly often looking, rather flat. The twists in Doc's investigation begin when Tariq (Michael Kenneth Williams, HBO's 'Boardwalk Empire'), who tells him his entire neighborhood was bulldozed for the Channel View Estates development, asks him to hunt down an Aryan Brotherhood member who happens to be Wolfmann's bodyguard. During his visit to Sloane Wolfmann (Serena Scott Thomas), who parades about in a barely there swimsuit and heels, Doc's snooping uncovers a rack of custom ties all featuring nudes, one of which is Shasta (it will reappear at The Institute, a private mental health facility reaping the rewards of Reagan's cutbacks, on the neck of a man whose face bears a tattooed Swastika). Then there's his old buddy Coy Harlingen (Owen Wilson), a junkie sax player whose 'widow' Hope (Jena Malone, "The Hunger Games: Catching Fire") hires him to find out what happened to her husband and tells him about heroin's effect on teeth. Hushed references to the Golden Fang keep turning up, but is it a ship or a heroin syndicate or both? It also seems to be tied to Dr.Rudy Blatnoyd, D.D.S. (Martin Short), whose practice is booming and turns up Japonica Fenway (Sasha Pieterse, TV's 'Pretty Little Liars'), the teenaged runaway daughter of one of Doc's clients. Doc's voyage repeatedly will cross with L.A. Lt. Det. Christian F. "Bigfoot" Bjornsen (Josh Brolin), who professes to hate Sportello and causes him all kinds of grief while wrestling with his own secret. Throughout it all, Doc's haunted by Shasta, whose postcard simply stating 'Remember the Ouija Board?' floods him with romantic yearning. It's a fun ride, if not as trippy as the book. Phoenix, decked out in surfer garb and dirty feet, is alternately focused and spaced out, in and out of the loop when he's not delivering laugh out loud pratfalls. As Bigfoot, Brolin's amusing with his ever present frozen bananas and his Koreatown demands of 'Molto panicako!,' but he's never as intimidating as he should be. (He did get my biggest laugh, informing Doc that he smells 'like a patchouli fart.') Waterston's the standout here, her mysterious allure lingering throughout the film (she returns for Anderson's revised ending, a happier take than Pynchon's). Singer/songwriter Joanna Newsom's hippy dippy seer Sortilège acts as narrator, injecting more of Pynchon's descriptive prose. The cast is huge, with some, like Benicio Del Toro's Sauncho Smilax, Esq, reduced to cameos (we could have used a lot more of Jeannie Berlin's fabulous Aunt Reet). Reese Witherspoon is Doc's current, unlikely, girlfriend Deputy D.A. Penny Kimball, Martin Donovan is Japonica's scary dad, 'Treme's' Hong Chau is 'massage therapist' Jade and Peter McRobbie ("Lincoln") a late-breaking dark figure. The film returns Anderson to his offbeat L.A., but too often it's represented indoors against plain white backgrounds in temporary looking sets. Maybe he was going after a porn look, but the counter culture was colorful. Jonny Greenwood's score, while fine, also fails to conjure up the era. But amidst its wacky tale of colorful characters and evil doings, "Inherent Vice" is an elegy for 60's idealism. It was a risky undertaking and Anderson's done well enough by it even if it's not among his best. Grade: