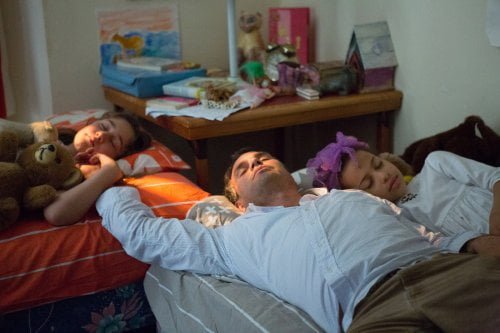 When their dad Cam (Mark Ruffalo, "The Avengers: Age of Ultron") keeps them home from school to celebrate a beautiful day in 1978, Amelia Stuart (the filmmaker's daughter, Imogene Wolodarsky) is concerned - didn't he just get that job he now says he's lost? It's the beginning of the realization that Cam Stuart suffers from mental illness, his diagnosis mangled by younger daughter Faith (Ashley Aufderheide) into "Infinitely Polar Bear."

Writer/director Maya Forbes (screenwriter, "Monsters vs. Aliens") has created a fictionalized account of her own youth for her directorial debut and the best thing about her film is that it feels personal. Without even knowing that it's autobiographical, "Infinitely Polar Bear" is so true to real experience with all its highs and lows, warts and idiosyncrasies, that it's like watching a child's memoir all wrapped up in love and frustration. When mom Maggie (Zoe Saldana, "Guardians of the Galaxy") comes home on that fateful day, she realizes what's happening, herding her children into the family car to flee to safety. The small family home in the suburbs gives way to a cramped Cambridge apartment (the film's prologue features Amelia's narration about her parents falling in love in 1967, set to great archival footage of Cambridge in the days Harvard Square was a cultural hot spot). The girls have become latch key kids, their mom working a dreary job, dad seen on weekly visits to a psych ward. Things get even worse when kids from a neighboring apartment question the girls as to where they go to school, outing Maggie's lie that got them into a better school in a wealthier district. The girls are downgraded to Lincoln and Maggie is frantic to improve all of their lot. Her plan? Now that dad's out of the hospital with his doctor recommending routine, Maggie hopes to get an accelerated MBA from Columbia on scholarship, commuting back to Boston on weekends while Cam takes care of the girls. Cam's blueblood parents (Keir Dullea and Beth Dixon) do not approve. Nor do they offer any financial support. At first, the experiment seems to work beautifully, but dad has no boundaries and Amelia's suffering through too much of her own turmoil for mature understanding. The girls live on a seesaw, some days offering the surprise of a new dog, others the embarrassment of a parent who marches through a Beacon Hill brownstone to show his daughters where five generations of Stuarts once lived despite a lack of invite. Cam also drinks, especially when he's feeling overwhelmed by dishes and laundry, even leaving his daughters alone overnight, but he'll also stay up until dawn working like a mad seamstress when Faith needs a flamenco skirt. Maggie sleeps on the couch on weekends as her husband pitches woo, feeling guilt on all fronts but marching on towards her goal. Forbes has created a breakthrough role for her daughter, Wolodarsky pitching her performance right at that awkward middle. Ruffalo's never been more manic on screen, his acting tipping dangerously towards the theatrical in a way that suggests he's parodying his Wasp background. His Cam can behave with great sense, like rejecting the offer of his grandmother's (Muriel Gould) Bentley, a car whose upkeep would break the family budget, then erupt into childlike glee over purchasing of a beater with a hole in its floor. Saldana has a tough role and makes the most of it, her stressed Maggie taking on all kinds of worry with the patience of a saint. Forbes's writing is true, funny and heartbreaking. She proves herself in the director's chair as well, maintaining clear perspectives from both her adult and child protagonists with bold subtexts of class, education and sexism (refreshingly, the interracial marriage is never commented upon). The production successfully subs in Providence, R.I. for the film's Boston and Cambridge locations. "Infinitely Polar Bear" enfolds its messy family dynamics into a big warm hug without ever crossing into sentiment. Forbes must have two very proud parents (her dad, whose own home movies are used in the film, passed away in 1998). Grade: