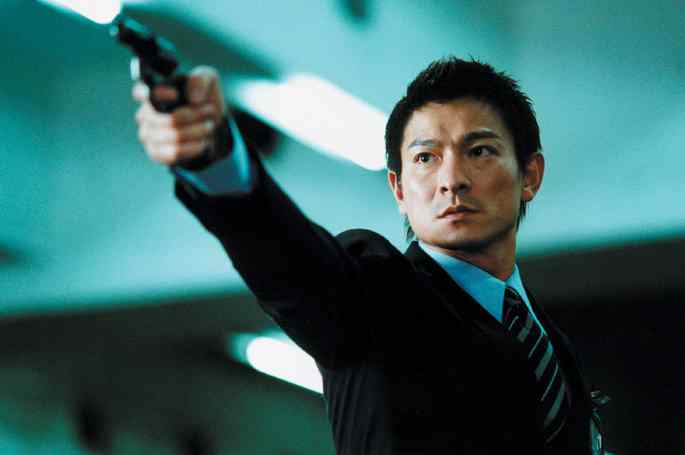 Chan Win Yan (Tony Leung Chiu Wai) was recruited into deep undercover when only a cadet in the Hong Kong Police Academy. Lau Kin Ming (Andy Lau) is a secret member of a powerful crime triad and is a deeply hidden mole in the HKPD. The two are so entrenched in their pretend lives the lines between right and wrong blur as each tries to uncover the other in “Infernal Affairs.”

Think “Deep Cover.” Think “Heat.” Think two-sides-of-the-same-coin. These things come to mind as I watched the hard-boiled crime drama, “Infernal Affairs.” Yan is recruited, while a police cadet, by Superintendent Wong (Anthony Wong Chau-Sang) to enter the dark and dangerous world of deep undercover within the Hong Kong triads. He’s been at it for over ten years, moving up the ladder as the trusted lieutenant of one increasingly powerful boss after another. He now works for Sam (Eric Tsang) who happens to be the gang leader who insinuated Ming and others into the service of the HK police as his moles. Ming was tops in his cadet class and has risen rapidly in the HK police. Outwardly, he is a tough crime-buster and, in all respects, a good cop. Secretly, he is searching for the mole that has plagued the triads for years giving valuable information on their criminal operations to the police. Yan and Ming are both undercover and both hunting for a mole. But, each has been immersed for so long in their lie that they have formed loyalties and friendships that neither is prepared for. Yan, doing the bidding of boss Sam, has become the criminal that he is supposed to be thwarting. Ming, too, takes on the aura and responsibility of a cop, pleased with the accolades he receives from his police colleagues. Infernal Affairs” is a character study that delves into the psychological effects of going deeply undercover. (But, “Deep Cover” does a better, more focused job on showing the impact on the mind of the mole.) Infernal Affairs” may confuse some with its many story threads. This is the kind of complex film that requires your full attention all the way through. It isn’t a good guy versus bad guy film but one that shows good and bad, both, in the makeup of the players. Dual-helmed by Andy Lau (as Wai Keung Lau, also credited as one of the film’s cinematographers with Yiu-Fai Lai) and Siu Fai Mak (sharing script credits with Felix Chong), “I.F.” is a complicated tale trying very hard to juggle the many stories of its many players. Flash backs to the days when Yan and Ming enter their undercover world lends to the confusion as their youthful versions don’t really resemble the older moles. There may be some resistance, in the American market, to how “Internal Affairs” ends. Our good-guy-always-wins penchant in the movies is taken to task and some/many may not appreciate the film noir ending. The movie bogs down, occasionally, as it tries to do too much, giving importance to minor characters that is more distracting than revealing. The principle cast does a solid job with this gritty crime drama. Leung and Lau are especially good in showing the difficulties their dual existences bring upon them. Anthony Wong stands out as police Superintendent Wong, the puppet master controlling Yan’s undercover efforts. Eric Tsang is also effective as the hard-as-nails crime boss, Sam. In true Hong Kong fashion, “Infernal Affairs” has spawned two sequels – both directed by Andy Lau. Having seen the original and knowing the outcome for its protagonists, I’m curious about the follow up efforts. Rumors run rampant about an American remake of the original.