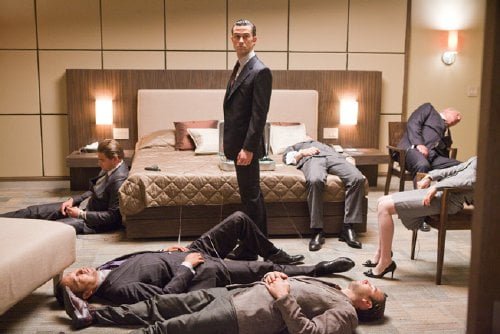 Cobb (Leonardo DiCaprio) is the self-professed best extractor in the business, who, with his partner Arthur (Joseph Gordon-Levitt, "(500) Days of Summer"), enters people's dreams to steal their secrets. But Cobb cannot return home to the U.S. and his two children because he's been framed for the murder of his wife, so when his most recent victim, Saito (Ken Watanabe, "Letters from Iwo Jima"), offers to clear his name for a special job, he accepts. There is a catch, though. Instead of stealing an idea, he'll have to plant one instead, a far trickier operation known as "Inception."

Writer/director Christopher Nolan's ("The Dark Knight") big, trippy film has been looked to as the savior of the summer of 2010, a real adult, thinking person's movie. Unfortunately it falls short of blowing off socks, instead maybe rippling a breeze through one's hair. It's got the same theme as his earlier, and far more intricately written, "Memento" - a man dealing with the death of his wife in a very altered state of mind. DiCaprio's involvement also cannot help but recall the same themes in his film from earlier this year, "Shutter Island." As Nolan puts us and his cast down, down, down through multi-layered dream states, it all becomes a bit too much, a little exhausting, even a little boring (that James Bondian skiing sequence!). Mostly, "Inception" gets by on its Escher-esque visuals which Nolan tries to give more import to by cranking Hans Zimmer's ("The Dark Knight") doom laden, fog horn score. (Nolan's consistent use of Edith Piaf's "No Regrets" seems to have no other purpose than to honor Cotillard's Oscar winning role in "La Vie en Rose.")

When Cobb fails in his mission because his wife, Mal (Marion Cotillard, "Public Enemies"), a 'projection' of his own subconscious, turns on him, Saito takes his architect, Nash (Lukas Haas, "Witness," "Brick"). Cobb doesn't like to build his own dreamscapes, so he goes to Miles (Michael Caine, "The Dark Knight") to find a new inductee. At first Ariadne (Ellen Page, "Juno") wants no part of it after experiencing a shared dream, one in which she's woken by being killed (a sure fire way to 'kick' oneself out of a dream, but a danger if the dreamer is under sedation). But the concept is too alluring and she returns (Ariadne's 'audition' accounts for many of the film's fancier moments, like Paris folding in upon itself). Ariadne uses a brass chess piece as her 'token,' a small heavy piece whose balance is used as a literal reality check (Cobb's is a top). The team, which now also includes Eames (Tom Hardy, "Bronson"), a humorous human version of a dream's shape shifter, visits chemist Yusuf (Dileep Rao, "Drag Me to Hell") to cook up the right sedative in order to go three levels into Robert Fischer, Jr.'s (Cillian Murphy, "The Dark Knight") dream and make him think it is his own idea to break up his deceased dad's conglomerate. Only Ariadne knows, however, just how much Cobb's own unresolved problems with Mal endanger their mission.

The film's best sequence by far falls upon Gordon-Levitt, who has to orchestrate that multi-layered 'kick' to get them all safely out of Fischer's head. They have all of a 10 hour flight to L.A. (5 minutes in reality equals 10 hours in a dream and time grows exponentially as one digs into deeper levels). When the team ends up in a van plummeting off a bridge in layer one, most of the group end up weightless, in suspended animation in level two. Arthur must fight off antagonist projections (Nolan used a giant rotating room for the weightless effect in a hotel room and hallway) and figure out how to get weightless bodies to drop. It is, indeed, a real kicker. But the movie drags until that finely timed 'kick' comes into play. The big 'reveal' Cobb explains to Ariadne is a big letdown, rather common sense on the surface of it. But the film goes out on an exhilarating note from that coordinated kick right up through its last, amusingly interrupted shot.

Other than the little Nicholson sneer which surfaces in his delivery, Leo's in the same realm as his "Shutter Island" performance and his is not a performance among equals. Most of the supporting cast are window dressing, cogs in Nolan's machine. Hardy stands out as highly intelligent, supremely confident and funny. Gordon-Levitt is droll and gets the tumble dry action. Pete Postlethwaite ("Clash of the Titans") has a couple of death bed scenes as Fischer's father and Tom Berenger ("Training Day") is interesting casting as the right hand man, Browning, whose motivations are plundered by Team Cobb.

With "Inception" Nolan attempts something grand and it has its moments, but it's also too long and more than a bit messy. It's sure to keep fanboys and sci-fi geeks going through multiple viewings looking for hidden clues but I can't help feel it's all a lot of smoke and mirrors.