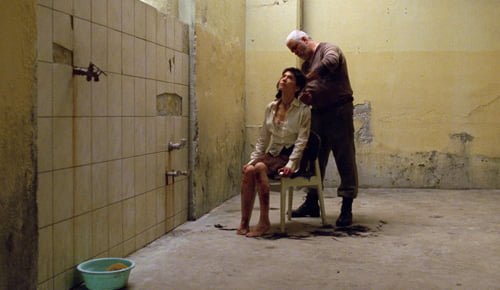 At the reading of their mother's will, twins Jeanne (Mélissa Désormeaux-Poulin) and Simon Marwan (Maxim Gaudette) are astonished to be given envelopes for a father they believed to be dead and a brother they didn't know they had. Wanting to discover why her mother maintained silence before she died, Jeanne travels to the Middle East to unravel the family history in Canada's nominee for the Foreign Language Film Oscar, "Incendies."

Well, having now seen four of the five Foreign Language nominees, it is clear the Academy has done it again, honoring the least of their own chosen. Writer/director Denis Villeneuve has made an intricately structured film which works both as a political mystery thriller and a devastating emotional drama. Villeneuve has adapted Wajdi Mouawad's stage play which takes the classic 'brothers on two different sides of a war' scenario and turns it into a Chinese puzzle box. Not since "Sophie's Choice" has a mother's love for her children inflicted so much pain. The film grabs you from its mysterious opening sequence in which we see a group of roughed-up young boys having their heads shorn to Radiohead's “You and Whose Army?” The camera drifts to the heal of one, which sports three tattooed dots, as hair drifts down around it. The camera moves back up and that boy looks directly into it, a world of hurt and the defiant survival of a weed in his eyes. The full meaning of this will not be apparent until the final act. Titles, names of people or places, are used to separate the movie into chapters which flash back and forth between Jeanne and Simon's story and that of their mother. They are informed by Notary Jean Lebel (Rémy Girard, "The Barbarian Invasions"), a close family friend who employed Nawal Marwan (Lubna Azabal, "Paradise Now") as his secretary for years, that her unusual burial request - naked, face down, with no stone to commemorate the site, will only be withdrawn if they succeed in delivering her letters. Jeanne, who was with her mother when she became catatonic at a public pool (images of swimming eventually pair with a horrific parallel), is moved. Simon is angry and wants nothing to do with his mother's 'craziness.' Jeanne sets out alone to her mother's home village where we flash back to what happened at that now-deserted home. Nawal, a Christian, fell in love with a Muslim 'refugee' (the film does not name its country and nationalities, although Lebanon and the Palestinians seem likely), who is shot in the head by her brother. Nawal herself is saved from an honor killing by her grandmother, who cares for the girl through a pregnancy and tattoos a mark on the infant's heel before packing it away to an orphanage and Nawal away to the city of Daresh, where she is to stay with an uncle and study at university. When the Christian right move in with tanks and close the schools, Nawal slips out of the house with a pretext, intent on finding her son. Her journey through the warring countryside, alternating her identity between Muslim and Christian, will set her on an unexpected, highly political path. A scene where her bus, filled with Muslims, is stopped by the Christians, is tense and horrifying, one of the most jolting anti-war scenes of recent memory, a child once again of central importance. The innocence and corruption of children is a theme which weaves its way quietly throughout. Meanwhile, Jeanne is giddy to make a connection with a Marwan, please to take part in local custom, then shocked to see the reaction to her mother's name and how quickly she herself becomes unwelcome. Jeanne has made assumptions, and when she discovers her mother not only was imprisoned in the notorious Kfar Ryat, but became a legendary prisoner known as 'the woman who sings,' she makes a discovery about herself that turns her whole history upside down. Eventually Simon, accompanied by Leger (who obviously has a slightly different agenda than the one he agrees to, given his determination in keeping promises), travels to the Middle East as well, to bring Jeanne back home, but he will be the one that discovers the last, shocking piece of the puzzle. Villeneuve has assembled a stunningly effective, little known cast. Azabal is amazing in the role, her resolve and strength in the face of unimaginable horrors palpable. She has an unshowy beauty which is reflected in Désormeaux-Poulin, a good match as her daughter. Désormeaux-Poulin's Jeanne has her mother's character, but is naturally more open, innocent and modern in her outlook. Maxim Gaudette is mostly missing from the picture's mid section, but in his early scenes he ably connects missing dots on Nawal's later years with his impatient dismissals. Girard is a calming guide. As the people who help the twins discover their truth, Nabil Sawalha and Baya Belal make strong impressions in small screen time. A country torn apart by war is vividly recreated with torn apart streets and windowless bunkers and the exoticness of the Middle East is in sharp contrast to the dull blandness of working class Montreal. André Turpin's ("It's Not Me, I Swear!") camera conveys the emotional turmoil of the characters, where something may lurk around every corner or within every person. The use of Radiohead is magnificent - at film's midpoint, as we enter Kfar Ryat, 'Like Spinning Plates' could almost be the film's opening song played backwards. The film's director has imbued his film with a surreal quality to help prepare us for the unthinkable. While keeping its history generic, "Incendies" nonetheless makes a strong political statement. It's a gut punch of a film, created with subtle artistry.