In This Corner of the World 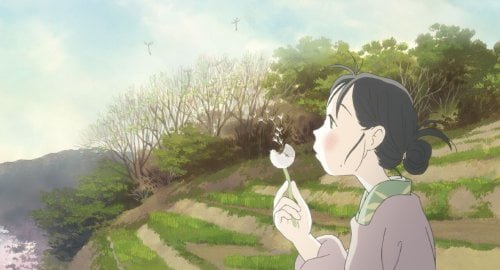 We first meet Suzu Urano (voice of Non) in 1933, the young girl sent into Hiroshima to sell seaweed. She creates an illustrated book of her kidnapping adventure to entertain her younger sister Sumi (voice of Megumi Han). But Suzu's love of drawing must take a back seat when, in 1944, she travels to naval port of Kure to marry Shusaku (voice of Yoshimasa Hosoya), a young man she's never met. Taking over the household and garden from his ailing mother San (voice of Mayumi Shintani), Suzu works hard, yet willingly, the war years taking tragic tolls. But although she had always hoped Tetsu Mizuhara (voice of Daisuke Ono), an older boy from her home town, would one day come for her, Suzu finds a love deep and true with Shusaku "In This Corner of the World."

Writer/director Sunao Katabuchi (assistant director of Hayao Miyazaki's "Kiki's Delivery Service") adaptation of Fumiyo Kouno's Manga is so achingly human, it recalls the works of Ozu with its poignant family drama and subtle, quiet wit. The hand drawn animation's soft color palette is like a memory beginning to fade, the colors brightening as bombs begin to fall. Suzu's drawing talent provides Katabuchi moments of fancy, Tetsu's comment that the ocean's waves look like hopping rabbits seized by the artist in her painting and by the filmmaker on screen. The filmmaker plays with reality in his storytelling too, Suzu's kidnapping which at first appears imagined, revealed as true with a surprising, late breaking revelation. The epic story illustrates how ordinary life is impacted by wartime, yet goes on even in the face of unimaginable tragedy. After Tetsu gifts Suzu with a pencil, she's smitten by the cynical teen who always seems to be watching out for her from a distance. In 1943, a young man arrives for her hand (leading to a hilarious sex talk from grandma about opening umbrellas), but he's thwarted. The next year she's married to another man, whose gentle approach is courtly woo. But the family is thrown into an uproar when Shusaku's widowed sister Keiko (voice of Minori Omi) comes home with her young daughter Harumi (voice of Natsuki Inaba). Keiko treats Suzu like a servant, picking up the one chore Suzu enjoys the most - cooking. Suzu contemplates returning to Hiroshima and she does, saying she had a dream she married a man in Kure, but it is her visit that is the dream. The film is rich with Suzu's experience. She befriends a Geisha when she wanders, lost, into the wrong part of town. She experiments with stretching rations. In the family's tiered hillside garden with Harumi, bombs begin to fall and the two women find themselves sheltered by Shusaku's father Entarou (voice of Shigeru Ushiyama). Out walking with Shusaku, Suzu spies Tetsu, now a sailor whom her husband invites to their home, allowing Suzu time with him. Sumi advises Suzu to return to Hiroshima, where the bombing isn't as bad, but Suzu stays in Kure, spending more and more time in the family's bomb shelter. A family member is lost and Suzu suffers a horrible injury, then finds herself battling incendiary bombs. One day the entire sky lights up with a brilliant flash, followed by an intense rumbling of the earth... Katabuchi dates each sequence, fading to black or using time-advancing montages as the Hiroshima bombing looms. His wartime animation flirts with photorealism while harkening back to more innocent times, incendiary bombs resembling the dandelion seeds Suzu blows into the horizon. A new character is introduced to illustrate, in one brutal scene, the horrors of Hiroshima, yet even here, Katabuchi finds hope in the unfolding future. "In This Corner of the World" is a compelling, gripping work of art and the best animation of the year to date. Grade: